A non-invasive alternative to brain surgery could be as effective 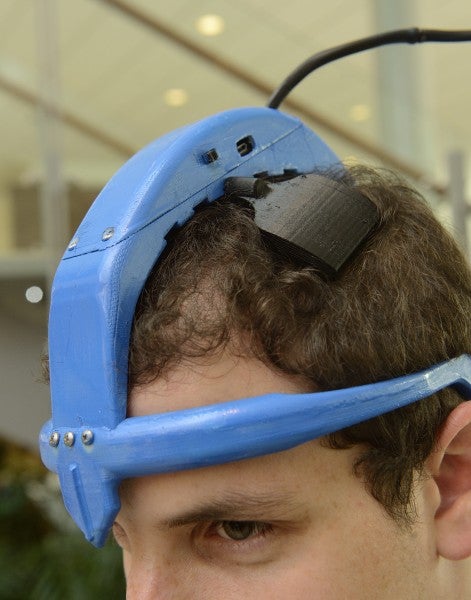 When Michelle Lane was incapacitated by Parkinson’s disease, her best option was brain surgery. Electrical leads were surgically implanted into her skull, and a pacemaker-like device installed to deliver electrical signals to the movement region of the brain.

Now researchers from Johns Hopkins University are developing a way to achieve the same effect without surgery. The device, dubbed the STIMband, resembles the three-pronged helmet worn by X-Men’s Havok. It uses external electrodes to deliver a low-level current to the motor cortex of the brain, and is based on the research of Yousef Salimpour, a postdoctoral research associate at Johns Hopkins.

Salimpour has been studying a noninvasive brain stimulation therapy called transcranial direct current stimulation. In the therapy two spongy electrodes are put on the skull and a small, sometimes imperceptible current is sent through them to a target region of the brain. Since Parkinson’s causes some asymmetry to the brain, the current can be used to excite or inhibit the nerves on the affected side.

The idea of the STIMband is to create an user-friendly device that patients can take home and give themselves the treatment for 20 minutes a day. In deep brain stimulation, the patient must get an MRI so the doctor knows where precisely to put the implant in the brain. However, the STIMband does not need to be as precise and can still hit the target regions of the brain just from measuring “landmarks” on the patient’s head, said Salimpour. The device also allows the flexibility to target parts of the brain based on disease symptoms, he said.

Since the STIMband is just a prototype, there will need to be more testing to further verify its efficacy and to rule out any placebo effect. There will also need to be major funding and FDA approval before it could become a household medical device, said Salimpour. But there have been no side effects using this noninvasive therapy in the short term, he said, and for those with Parkinson’s it might be very helpful to use in conjunction with medication, since one modality would not interfere with the other.

Michelle Lane doesn’t know where she would be today without deep brain stimulation, she says. “When the doctors hit the ‘sweet spot’ as they call it, your tremors stop and your muscles loosen up. It just brought tears to my eyes,” said Lane, who had to lie awake on a table while the surgical procedure was being done. “Brain surgery is always risky because of the infection rate. I’m very appreciative of what they’re trying to do.”