The next generation of brain implant is a teeny tiny coil

The micro coils make mind-controlled prosthetics easier to use 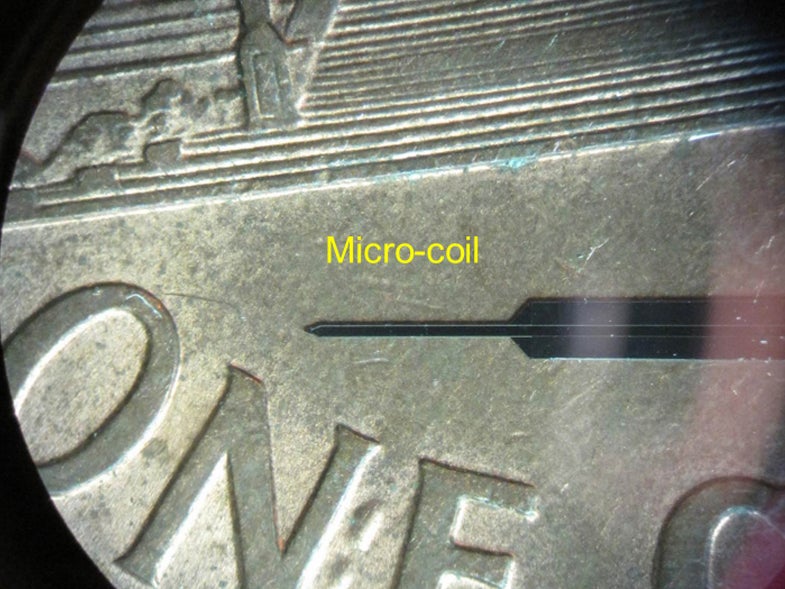 Research on brain implants has exploded in recent years. With the right mechanisms, they have the potential to help people with everything from paralysis and Parkinson’s disease to certain types of eye damage and blindness.

These implants, which are surgically inserted into the cortex of the brain, work by stimulating neurons that then target specific cells throughout the body. But until recently, many of these brain implants have been electrode-based, relying on conductivity between the metal plate, the implant, and the nerves around it. These devices often become less effective overtime, and the metal plates can (and often do) corrode. Their need for direct contact between the metal and the brain can lead to problems as well.

Now, researchers have come up with a different kind of implant that they’ve dubbed “micro coils.” These tiny metal coils—which are thin wires with single sharp bends in them—use magnetic energy to stimulate brain activity, similar to the way an MRI works. Their hope is that these new devices will not only last longer in the brain, but will also allow for more fine-tuned muscle movements, making brain implants more effective. Their work was published Friday in Science Advances.

“We are pretty enamored by these coils right now,” says Shelley Fried, lead author of the study and a professor of neurosurgery at Harvard Medical School. “I think it’s too early to say that coils are going to be the method of the future, but I think there’s definitely a possibility that they might.”

While the researchers are particularly interested in using these micro coils to treat eye conditions by stimulating the visual cortex, Fried says they could be used for any disorder that has a basis in the cortex of the brain. They could even help patients with paralysis make better use of high-tech, mind-controlled prosthetics.

One of the biggest concerns with electrode-based implants, which are the current standard, says Fried, is that they don’t really allow for fine-tuned control. When they target neurons, they target basically every neuron in the area they are in contact with. So if they were being used by a paralyzed person to manipulate a prosthetic, they wouldn’t allow the person to know how tightly they were gripping something, or how strongly they were pushing or pulling an item. The micro coils use a different approach: By using magnetism, the coils create directive fields. These fields then narrow in on a specific group of neurons only.

“A coil might give some advantages because we can target a narrower area of the brain. So we could target it on a single fingertip, for example,” says Fried.

The researchers already successfully used these implants in mice, and have plans to try them out in human cortical tissue next. If all goes well, their next step will be to test them in primates.

Micro coils are just one approach to creating brain implants that allow for more fine tuned movement. There are lots of other ideas in the works, and Fried expects that over the next several years to decades, these brain implant devices will get a whole lot better. Soon, this technology could have a real impact on the lives of patients with conditions like paralysis.