Violate the Geneva Conventions in your own backyard! 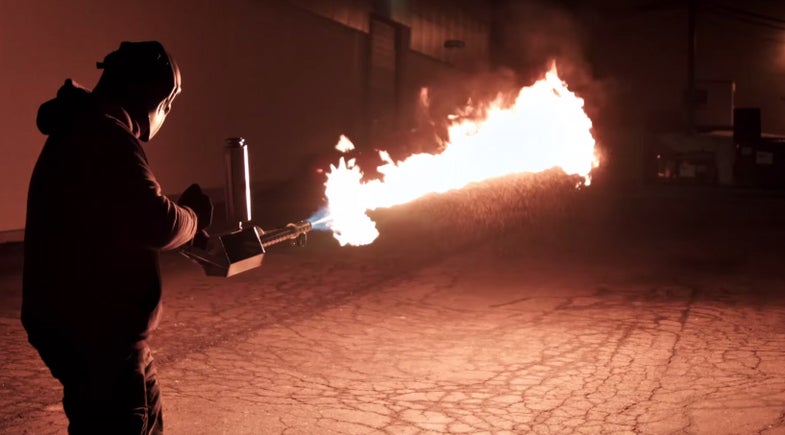 The XM42, a personal flamethrower now soliciting funding on IndieGoGo, is a very specific answer to a very foolish question: Could more of the world be on fire–and should it be? This device answers that question with a jet of burning fuel.

The XM42 flamethrower is made by Ion Productions, a game development studio whose about page only features one person holding an assault rifle. The flamethrower comes with a basic model at $699 or with a fancier body for $799. Fueling the fire of the XM42 is 87 octane gasoline, which can produce a stream of flame that reaches up to 25 feet. It’s purported as the first commercially available handheld flamethrower, though a quick search reveals other flamethrowers available, albeit ones that require users to strap fuel canisters to their backs.

This is great news for people who like burning stuff; terrible news for snow or weeds anything that doesn’t like being on fire. Flamethrowers are specifically banned under international law, by Protocol III of the Convention on Certain Conventional Weapons, which specifically guards against militaries using flamethrowers on civilians, on other military targets in civilian-populated areas, and on foliage. Those laws, while clearly opposed to humans pointing flame nozzles at each other, govern only the use of flamethrowers by militaries, and not private citizens.

In the United States, flamethrowers are illegal in Maryland and require a license for use in California. They are apparently legal in the remaining 48 states, though anyone interested in acquiring an internationally reviled tool of war should probably check local laws beforehand just to be safe. Well, legally safe.

Of course, all this may not matter. Ion Production’s dedicated website for the XM42 is down. Their Indiegogo campaign page instead just redirects viewers to Indiegogo’s home page.

Watch video of the XM42 below: