The Future Of British Warfare Is This Modest Tanklet

Development moves forward on a new family of armored scouts 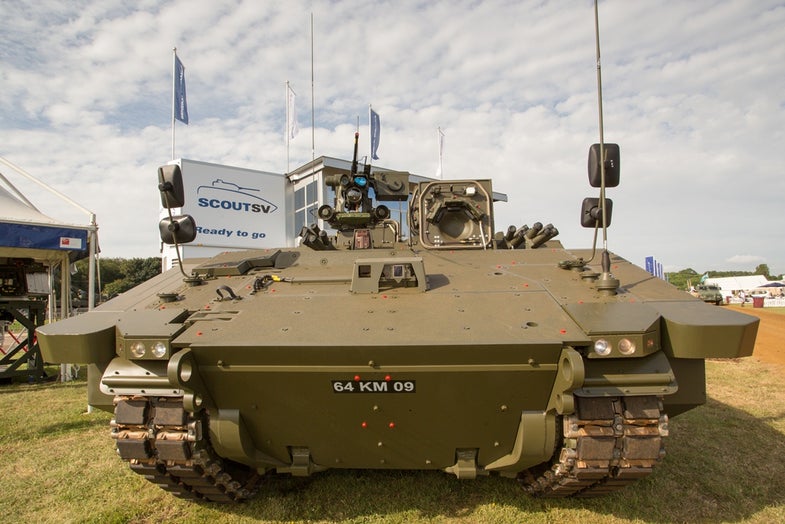 In the future, when the United Kingdom goes to war, it will do so with small, tank-like vehicles. Last month, the U.K.’s Ministry of Defense approved the next stage of development for the General Dynamics Scout Specialist Vehicle. From the body of the Scout, the U.K. plans to build and use a family of vehicles.

For all but the most technically minded observers, the Scout is exactly what it looks like: a tank, complete with gun inside a turret on top and an armored body. But appearances here are a tad deceiving. The Scout’s 40mm main gun is fine for a smaller vehicle but dwarfed by the 120mm main cannons of tanks like the M1 Abrams. And, while the Scout will do the jobs of a lighter tank, it will weigh almost three times as much as the light armored vehicle it’s replacing. The main version will do exactly what the name implies: scouting ahead of the main force, including in places where it’s safer to be inside an armored chassis. Besides the scout version, the U.K. plans on using some of these tanks as repair vehicles, mobile command centers, armored personnel carriers, and several other roles.

The Scout will have several other defensive features, such as sound sensors, laser warnings, and various electronic countermeasures. It isn’t quite like DARPA’s vision for a tank that protects itself by having less armor, but it does use a hybrid approach, combining a tough exterior with modern advances.

Take another look at the Scout SV below: Of course, what starts as a scout vehicle doesn’t always stay just a scout vehicle. If the Scout passes another review later this year, it’s expected to enter service with the United Kingdom around 2020.