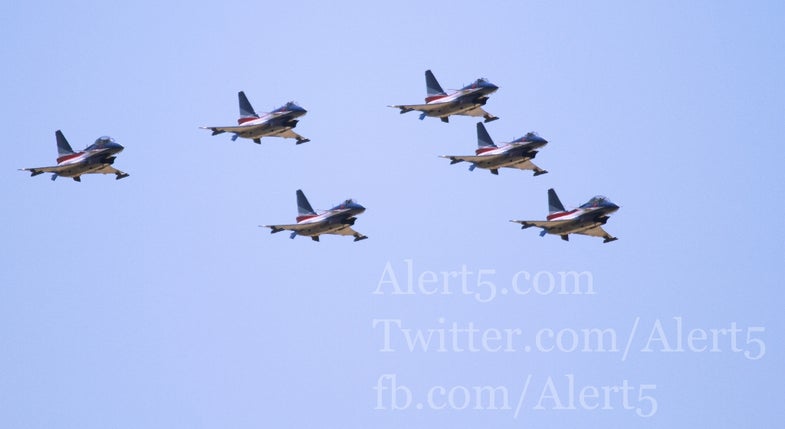 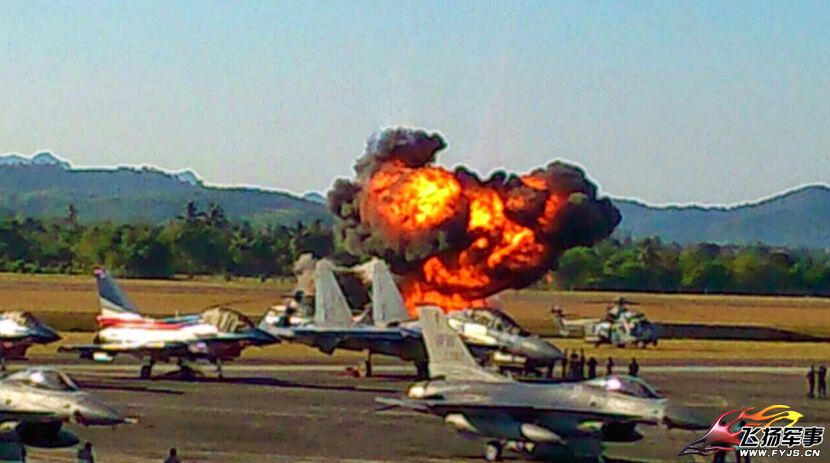 Akin to the American Thunderbirds unit, the Bayi team flies China’s most modern fighter, the Chengdu J-10, painted in an eye catching blue, white and red color scheme (wartime colors are standard PLAAF grey). Founded in 1962, Bayi is a PLAAF squadron which started flying J-10s in 2009, having previously flown J-7s and MiG-17s. Among other occasions that Bayi has flown include the 2013 MAKS airshow in Russia and China’s 50th National Day parade. 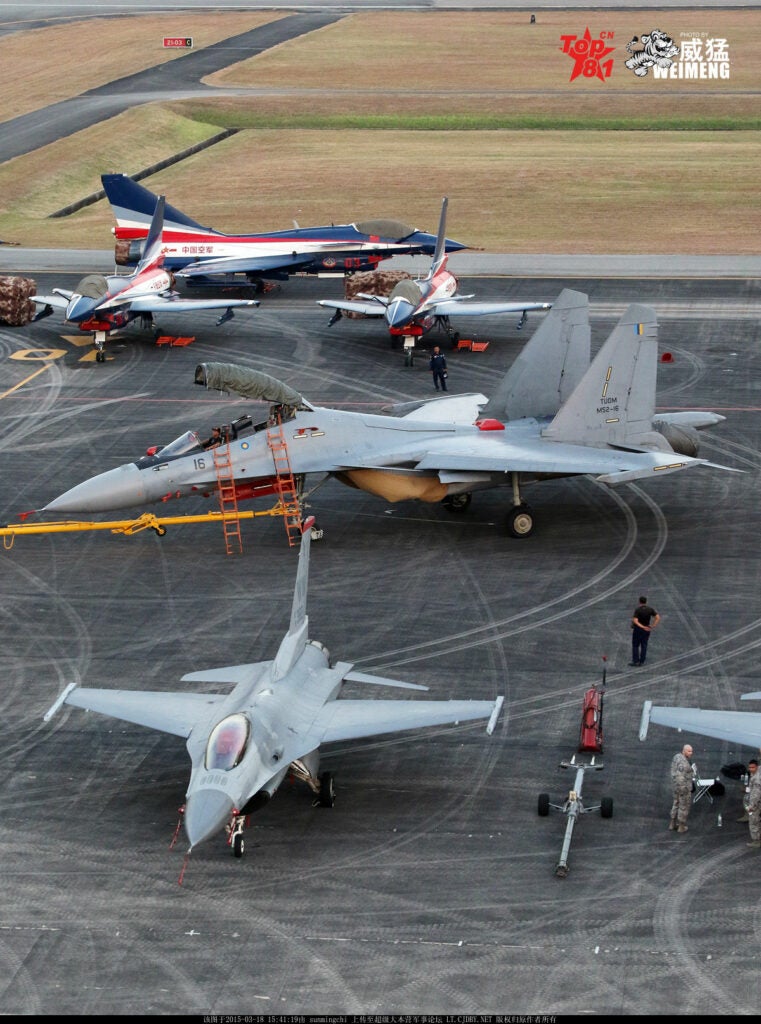 Arms fairs and airshows have become very international in the Post Cold War world order, where we can since China’s Bayi J-10s (the most colorful by far) in the background, a Royal Malaysian Air Force Su-30MMK Flanker strike aircraft, and two USAF F-16s in the fore. 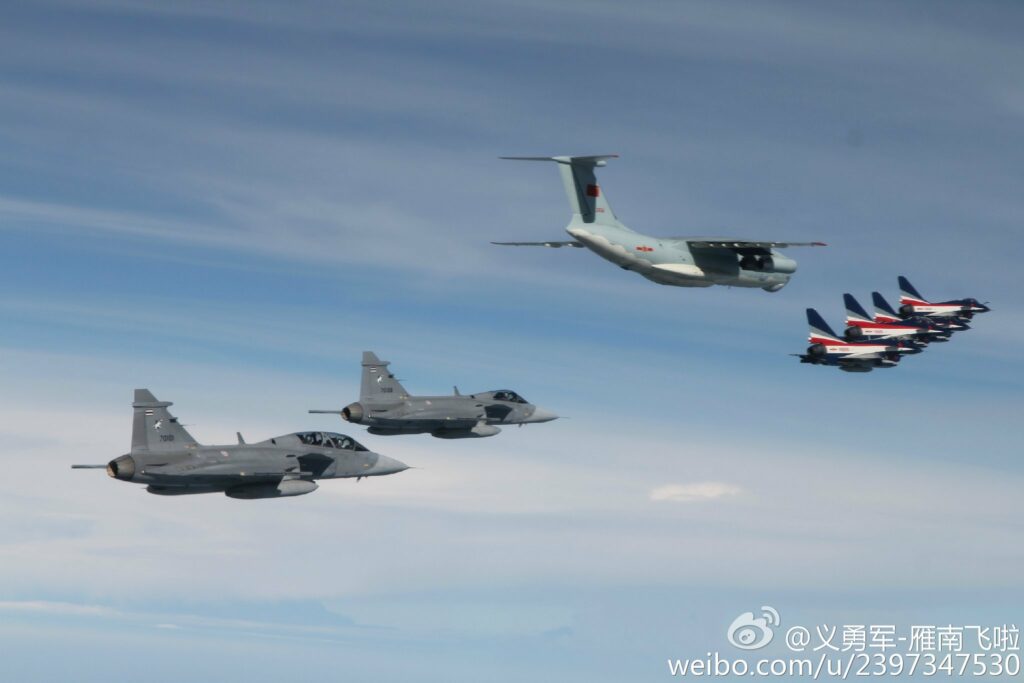 In Thailand, does as the Thai do

China’s Bayi J-10 fighters and the Royal Thai Air Force (RTAF)’s Saab Gripen fighters fly together as part of the welcoming ceremony for the Chinese. The escorted Il-76 transport carries the equipment, supplies and support crew for the Bayi aerobats.

Following Malaysia, Bayi visited Thailand starting on March 23, as part of a military exchange program. While Thailand is one of America’s oldest Asian allies, Bangkok also has strong military ties with China, including arms sales of rocket artillery and warships. The J-10s flew alongside Thailand’s Saab Gripen fighters as part of the opening ceremonies, as a prelude to public demonstrations. 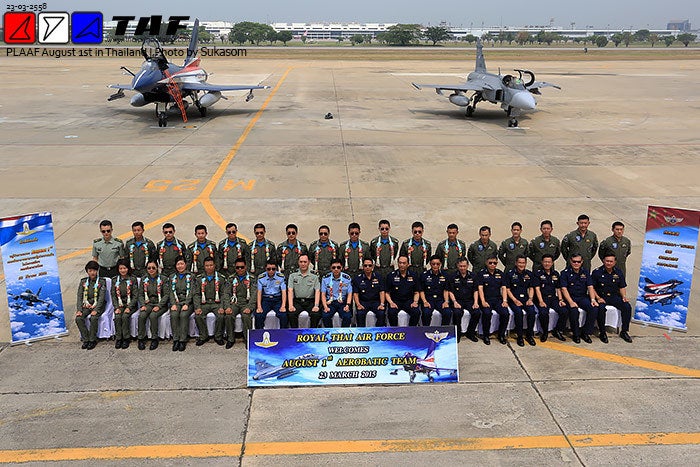 Thai hosts welcome their Chinese counterparts, the Bayi Squadron is going to play a critical and visible role as part of China’s military diplomacy.

These visits are notable as China has been busily increasing its international military presence not just with arms sales, but also through “soft military power” displays like aerobatics, humanitarian and naval port of call visits. As Bayi continues to win international accolades for China’s air force, many believe that the Chinese Navy itself may one day create its own Blue Angels style aerobatic squadron to match their PLAAF cousins.

What New Chinese Weapons Will We See at this Year’s Zhuhai Air Show?