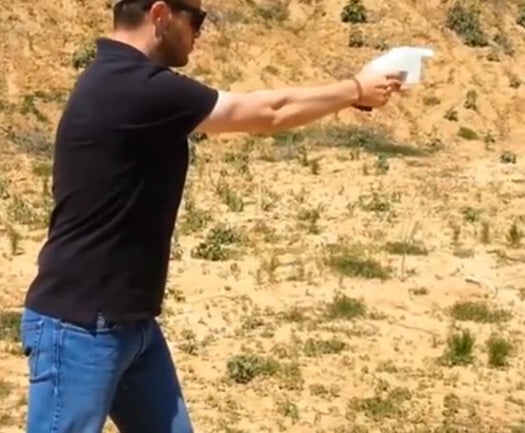 Earlier today we reported that Defense Distributed, an organization that recently released open-source plans for a 3-D printed gun, received a letter from the U.S. State Department to remove the plans.

Defense Distributed Founder Cody Wilson’s reaction: “I’m disappointed, not surprised,” he tells us in a phone interview. And besides, he says, “(The blueprint) has been downloaded over 100,000 times, so it’s like, I mean, we win.”

What he means is that though he complied with the State Department and removed the files from his site, the files still exist elsewhere on the internet. A lot of the downloads were through the online file-hosting service Mega, based in New Zealand, and the peer-to-peer file sharing site Pirate Bay has copies as well.

According to Wilson, this is the first time the State Department has contacted him, even though the site already hosted blueprints for gun parts and featured ammunition magazines named after a sitting senator and governor. “They have now suggested, basically, that I need to ask for permission for basically all (of the files hosted),” Wilson told Popular Science.

The Department of State specifically listed 12 files in the takedown notice, and included language implying that all files hosted were up for review.

Wilson has contacted the Electronic Frontier Foundation for help counteracting what he sees as an infringement on free speech rights. Says Wilson:

“The thing is, these aren’t the only gun files on the internet. They’re related to 3-D printing, which is a very corner way of doing it. There’s CNC gun files all over the freaking internet, man. Not just CNC guns but hobby gun websites. There are files out there to make metal gun components or various dangerous things, but those are low profile. (The 3-D printed gun plan) had to be answered, because it can’t be, like, techno-libertarianism wins.”