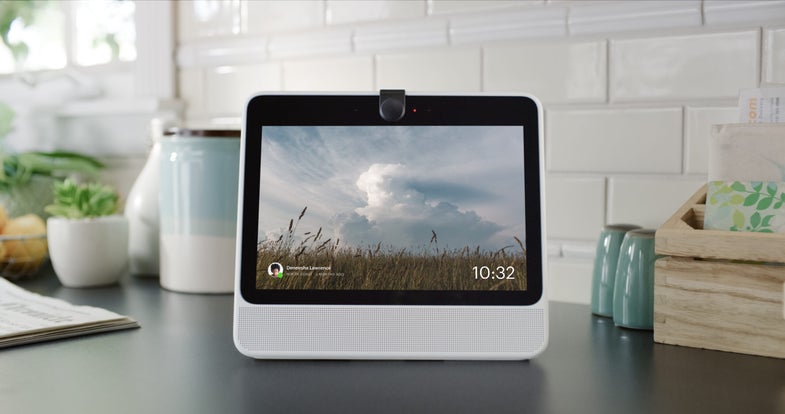 Whether it’s a laptop, desktop computer, smart TV, smart home hub, or even your smartphone, the number of gadgets that have the capability to see and hear you, often at the same time, is on the rise. This week the social media platform Facebook got into the mix, when it announced its Portal and Portal+ devices. They look like the stylish offspring of a corporate teleconference rig and a digital photo frame, and both are designed to facilitate video chats, media playing, and smart home control.

The fact that these things come from Facebook is relevant. Just as the massive Cambridge Analytica privacy scandal started to fade from media coverage, a vulnerability affecting more than 50 million users popped up just a few weeks ago. Information about its users is valuable to Facebook and a device like this could provide troves of it under the right circumstances.

That makes one specific piece of the Portal devices particularly important: the button that turns the camera and microphone on and off. We talked to Facebook about some of the specific ways in which that button works.

What happens when you push the button?

“We’ve created a subsystem that’s hardware-based,” says Bill Park, a “When you initiate this mode where you turn off the camera and the microphone, it tells a piece of software to talk to a dedicated chip we have in the system to shut down those devices.”

A red indicator light lets you know that the camera and microphone are disabled; you can’t issue voice commands (to Portal or Alexa) until you turn the sensors back on. Facebook says it’s not listening or watching at all when this mode is enabled.

This off button is a common feature on home hubs, but they don’t always work the same way. For instance, the Google Home Hub, released yesterday, has a physical switch that cuts power to the microphone array completely. It has no camera at all, specifically due to security concerns, according to the company.

Can you turn them off with your voice?

According to Facebook, there’s no voice command that will stop the microphones completely from listening. The hardware switch handles that function.

How do you turn the microphones and camera back on?

Because the Portal microphones aren’t listening, turning them back on requires another button press. According to Facebook, there’s nothing you can say while the red light shows that will re-enable them.

This matches up with other smart home hub devices like the Amazon Echos, which use a similar red light to indicate when it’s not listening.

Is the device listening when you’re in a call?

If you’re in a video call, you can’t issue commands to Alexa, but you can, however, use the “Hey Portal” commands to perform local operations while you’re in a call. So, if you want to hang up from a call, you can do so. You can also adjust things like the volume of your call.

Is it keeping track of your queries?

Because there are two different assistants inside the Portal, each one is handled differently. “Alexa queries go directly to Amazon,” according to Facebook. The company says it doesn’t listen to or store those Alexa requests at all and simply sends them along to Amazon in response to the trigger word.

Is the Portal listening to video chat conversations?

Despite the fact that the device can hear commands during video chats, Facebook says it’s not listening to your conversations to find information to help it with targeted advertisements. “The calls aren’t recorded anywhere,” according to Park. “If you’re using messenger, it’s encrypted accordingly.”

Can you turn the mics and camera off independently?

If you push the on/off button, it works for both the camera and the microphone together. So, if you want to hard mute the mic, but do some interpretive dances via video call, you’re out of luck on that front. The device does, however, come with a physical cover for the camera that you can leave in place when you’re not using it. Taping over or covering up any or all of your camera-laden devices is a common—and probably advisable—practice. In this case, the cap lets you continue using voice commands without a camera looming over you.

Can you still do anything with the mics turned off?

While voice is the primary control mechanism for the Portal devices, they’re both still equipped with touchscreen displays, so you can display photos, navigate media, and accomplish other up-close tasks like playing videos and music. If you’re planning to never use the voice commands or the camera, however, it’s probably best to just avoid a device like this in the first place.

So, it’s totally safe then?

While Facebook has clearly made security one of the main talking points of this device (understandably so), it’s still a connected device in your home and that comes with certain inherent risks. Vizio is just now settling a class action case brought on by its smart TVs that weren’t totally upfront when they were watching and listening to customers. The original shipment of Google Home Minis that went to journalists were unexpectedly recording some users thanks to a bug in the physical “activation” button meant to wake up the device.

If you don’t want to be recorded, adding an extra microphone and camera to your home is probably a bad idea. But Facebook’s announcement is also a reminder to take stock of the gadgets you own that are watching and listening already.