The specimen of the extinct marsupial dates back to 1936 and solves a decades-old mystery. 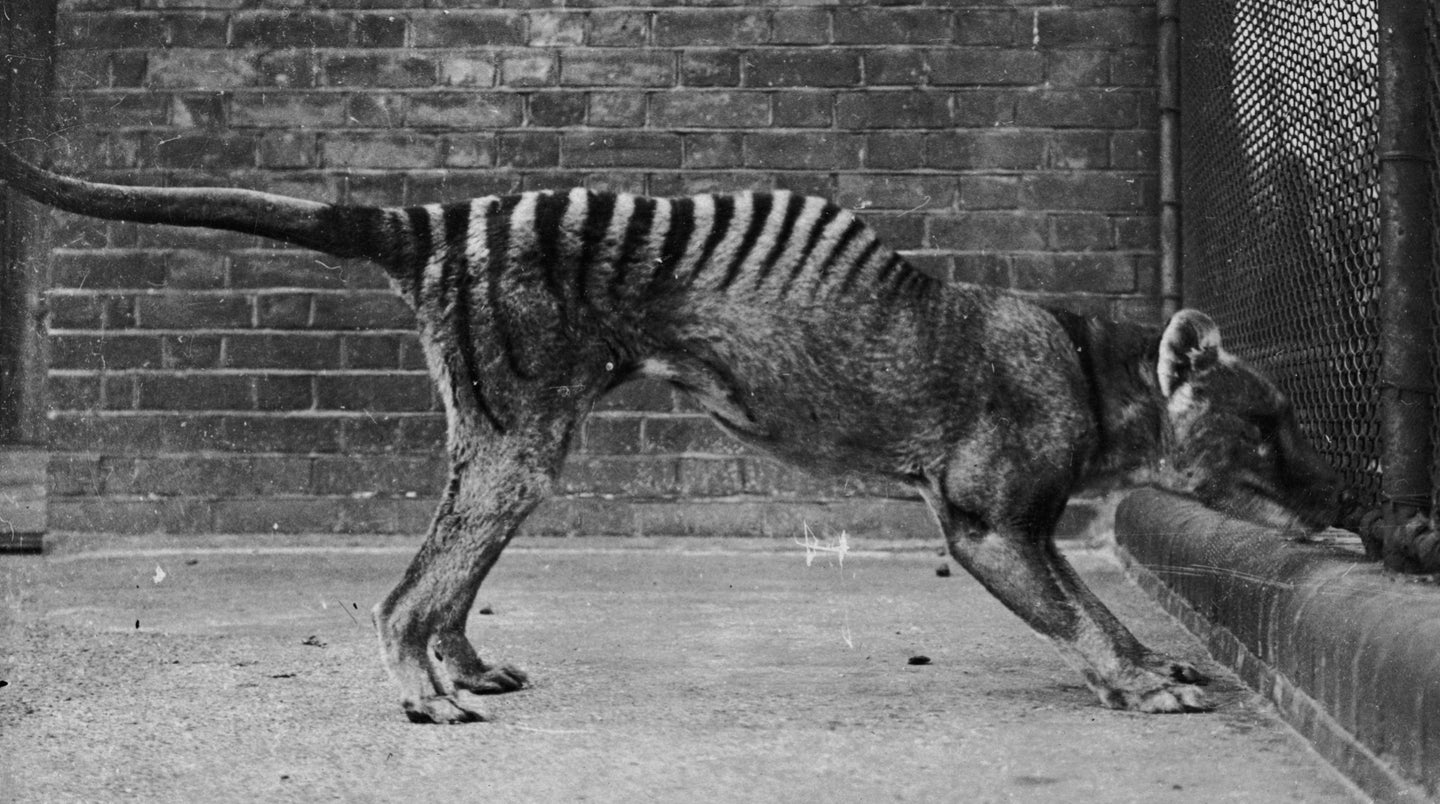 A thylacine or 'Tasmanian wolf', or 'Tasmanian tiger' in captivity, circa 1930. Photo by Topical Press Agency/Hulton Archive/Getty Images)
SHARE

Recently, scientists have uncovered a lizard fossil that hadn’t been seen since the 1950s and army ant fossils that were hidden at Harvard University for almost 100 years. It turns out that there is yet another big fossil find traced back to a museum cupboard, this time at the Tasmanian Museum and Art Gallery (TMAG) in Hobart, Tasmania. Researchers there found the long-lost remains of the last known Tasmanian tiger, or thylacine (Thylacinus cynocephalus). The remains have been missing for over 85 years.

[Related: A genetics startup wants to bring the Tasmanian tiger back from extinction.]

“For years, many museum curators and researchers searched for its remains without success, as no thylacine material dating from 1936 had been recorded,” said researcher and comparative psychologist from the Australian Catholic University Robert Paddle, in a statement. “It was assumed its body had been discarded,” he added.

The Tasmanian tiger was a dog-sized carnivorous marsupial with sharp claws, that was native to New Guinea, the Australian mainland, and Tasmania for four million years. Sporting yellowish to gray fur and distinctive tiger stripes covering its body, it first disappeared from the mainland about 2,000 years ago. The National Australia Museum speculates multiple factors, including over hunting and the introduction of the dingo, led to this first wave of extinction.

By the late 19th and early 20th centuries, Europeans began to colonize the island of Tasmania—an island about 150 miles south of Australia. They incorrectly blamed the marsupials for killing their chickens and sheep and thylacines were slaughtered by the thousands, with the government even offering bounties for thylacine pelts. Throw in the same fight for dominance with dingoes and the Tasmanian tiger was doomed. The last known thylacine died in the Beaumaris Zoo in Hobart on September 7, 1936.

However, the thylacine that was often dubbed the last thylacine in photos, was actually the second-to-last thylacine. According to Paddle, the actual last thylacine, also called the “endling” of the species, was an older female animal and is the specimen that had been lost in a cupboard for all these years. The thylacine had been captured by a trapper from the Florentine Valley named Elias Churchill and sold to Beaumaris Zoo in May 1936, before it died. The skeleton and skin of the specimen were then stashed away in the cupboard at the musuem, due to its “somewhat shady” acquisition and the experts lost track of it.

“The sale was not recorded or publicised by the zoo because, at the time, ground-based snaring was illegal and Churchill could have been fined,” Paddle said. “The thylacine only lived for a few months and, when it died, its body was transferred to TMAG.”

Curators used the discovery of a previously unpublished museum taxidermist’s report dated back to 1936-1937 to verify when the last thylacine specimen arrived at TMAG. The report mentioned a thylacine among the list of specimens that the institution worked on during that year, according to Honorary Curator of Vertebrate Zoology at TMAG, Kathryn Medlock.

[Related: The search for the extinct Tasmanian tiger.]

“The thylacine body had been skinned, and the disarticulated skeleton was positioned on a series of five cards to be included in the newly formed education collection overseen by museum science teacher Mr. A W G Powell,” Medlock said, in a statement. “The arrangement of the skeleton on the cards allowed museum teachers to explain thylacine anatomy to students.”

Both Paddle and Medlock said that the species will take its place alongside the passenger pigeon and Carolina parakeet in the museum. A paper detailing the findings will be published at a later date in Australian Zoologist.

The thylacine has been in headlines recently for efforts to resurrect the extinct marsupial. Gene-editing startup Colossal Biosciences & Laboratories announced its plans to use CRISPR gene-editing technology to bring back the thylacine. While the Jurassic Park-esque science isn’t quite here yet, the company founded by tech entrepreneur Ben Lamm and geneticist George Church laid out a 10 step plan to re-introduce a Tasmanian tiger like animal back into the wild. They are partnering with and investing in the University of Melbourne’s Thylacine Integrated Genetic Restoration Research Lab (TIGRR). TIGRR is currently led by marsupial evolutionary biologist and Tasmanian tiger expert Andrew Pask and has already performed the crucial first step of sequencing most of the animal’s genome.

However, not everyone is onboard with this plan. In an interview with the Sydney Morning Herald in August, Jeremy Austin from the Australian Centre for Ancient DNA described this de-extinction effort as “fairytale science,” and claimed that efforts to bring back the thylacine or the mammoth are more about media attention than the actual science. In the same interview, marsupial DNA expert Mike Westerman from La Trobe University added that he is “not convinced that it can be done with our current knowledge. Where on earth would a self-sustaining population be maintained?”

Editor’s Disclosure: Matt Sechrest, the managing partner of Popular Science‘s parent company, North Equity, is an investor in Colossal. He was not involved in the assigning, writing, or editing of this story.