"I would certainly not be first in line to stop one of those bio-tanks." 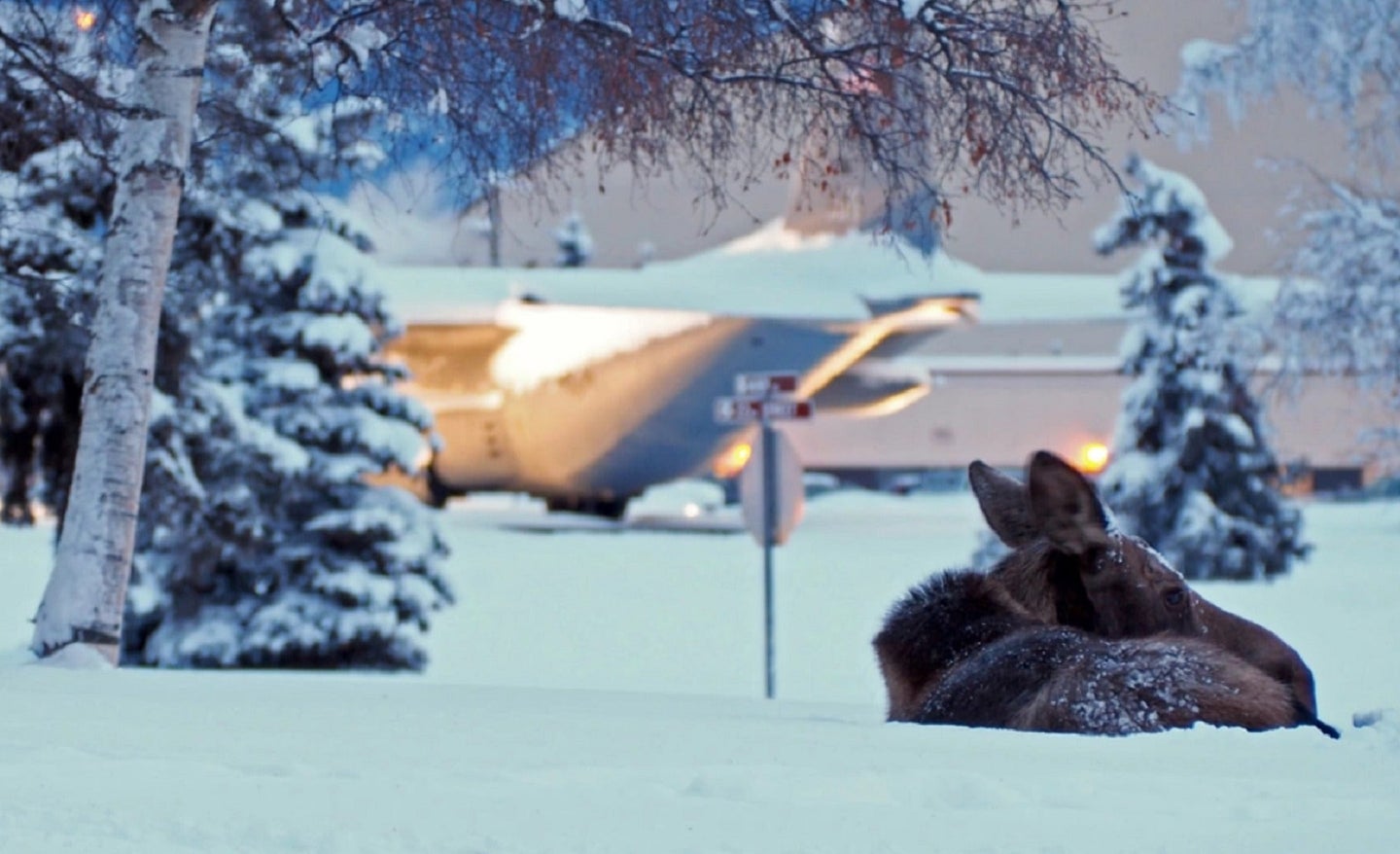 A moose rests in more than a foot of snow, as the early morning sun shines on a C-130 Hercules at Joint Base Elmendorf-Richardson, Alaska on January 24, 2017. Airman 1st Class Javier Alvarez/U.S. Air Force
SHARE

As the Air Force equivalent of military police, security forces airmen have to be ready to face a range of threats. There could be gate runners, intruders on the flight line, or just the bitter cold and blazing heat that comes with standing on post all day. But in Alaska, airmen face one more danger: enormous, six-foot tall creatures that weigh more than 1,000 pounds sporting massive antlers that can stretch up to six feet wide.

Forget China and Russia. These creatures are the real threat, and they are known as “moose.”

“I would certainly not be first in line to stop one of those bio-tanks from going wherever the hell it felt like going,” wrote one commenter on the unofficial Air Force subreddit, where a member of the Joint Base Elmendorf Richardson, Alaska community posted an image of a moose blocking traffic outside the base on Thursday.

“Oh I’ve spent my time at JBER,” said another. “I’m aware of how scary moose are.”

A moose did indeed block traffic on Thursday at Joint Base Elmendorf Richardson, Staff Sgt. Michael Pfeiffer, of the 673rd Air Base Wing Public Affairs shop, confirmed for Task & Purpose. Lights and sirens were used to safely remove the animal from traffic when it became clear it would present a danger to motorists.

“Typically, [security forces] are not supposed to move wildlife unless in a serious emergency or endangerment of life, as an agitated moose is very unpredictable,” Pfeiffer explained, citing a game warden on the base. “Use of lights and sirens is the method utilized, although optimally Fish and Game will be called.”

The moose was of “solid size,” but it was difficult to get its exact dimensions, Pfeiffer said. From the photo, it looks like it dwarfs a nearby truck, but that could be because it was standing on a median or was closer to the camera than the vehicle.

“Every time I see one emerge from the wild it’s like seeing a whale surface,” wrote the Joint Base Elmendorf Richardson member who posted the photo to Reddit. “Never really gets old.”

To be clear, moose are herbivores and are unlikely to devour you, your battle buddies or your family and friends. But God help you if you get on the wrong side of these gentle giants. In fact, on the base’s website, there is a section devoted to advice on how to behave safely around the animals. Tip number one: do not approach moose, especially female moose, called cows, who can be aggressive when they have calves around. Also do not feed moose, which is dangerous and illegal, and be careful not to let dogs approach, as the moose may feel threatened by them.

“The key to coexisting with moose is to avoid confrontations by giving moose plenty of space,” wrote the Alaska Department of Fish and Game. “Never approach a moose!”

The body language of a moose is also telling: when one has its ears up, it may be curious but not threatened. However, when its ears are back, the hair on its neck is up, or it’s licking its lips, it may feel stressed or threatened and could charge. When that happens, all you can do is “hide behind something, such as a tree” or “run if you have a head start,” according to the base website.

“If you are knocked down by a moose: Curl into a ball, protect your head, and keep still until the moose retreats,” the base website warns.

This background information makes it all the more impressive for the security forces airmen who had to somehow convince this massive ungulate—a hoofed mammal—to clear the road. In fact, the Alaska Department of Fish and Game says that sometimes you just have to wait it out.

“The moose will move away in time,” the department wrote on its website. “It may take half an hour or more, but it is usually worth waiting. Sometimes a loud noise or movement will startle a moose into moving, but moose that are used to people are not easily chased away.”

In fact, they seem to wander onto Alaska bases with some regularity. Moose blocked traffic six times there in 2021, Pfeiffer explained, and they’re not the only grande-sized critters to do so.

“Bears will sometimes wander into the roadways or onto sidewalks,” Pfeiffer said, citing the game warden. “They are more predictable than a moose and have a greater range of vision so are easier to draw away.”

It’s not just that the moose are stopping by to inspect the base. Sometimes they are drawn in by the flavor of road salt carried by melting ice, Pfeiffer explained. They’ll even be drawn to people’s sidewalks for that reason. Unfortunately, sometimes the encounters become unsafe: Seven moose were hit by vehicles in 2021, the airman said.

Besides making guest appearances at Joint Base Elmendorf Richardson, moose actually have a wide presence in the Air Force. The C-17 Globemaster III, the 30-year-old cargo jet that can do anything from drop paratroopers to carry a 69-ton M1 Abrams Battle Tank, is big, strong and slow-moving, but that’s not why it’s nickname is The Moose. No, it’s because of the sound the aircraft’s pressure relief vents make during ground refueling, which some say resembles the sound of a female moose in heat.

“It is a popular nickname, with squadron posters and t-shirts dedicated to it,” Darrell Lewis, the historian for the 437th Airlift Wing, told Task & Purpose last year.

“It’s pretty common to hear the C-17 called the Moose at work,” one Air Force pilot told Task & Purpose. “We are all part of the Moose Gang. Just as the C-130s are the Herc Gang, and the KC-135 are the Gas Wagon Mafia. It’s a cool uniter amongst aircrew.”

Who knows, maybe moose keep wandering onto Joint Base Elmendorf Richardson because they hear the C-17s of the base’s 144th Airlift Squadron being refueled there. Stranger things have happened, like that time a raccoon chased a fire team of US soldiers out of their Stryker.

Bottom line: if you’re visiting Alaska and come upon a giant creature with antlers, give it the right of way.