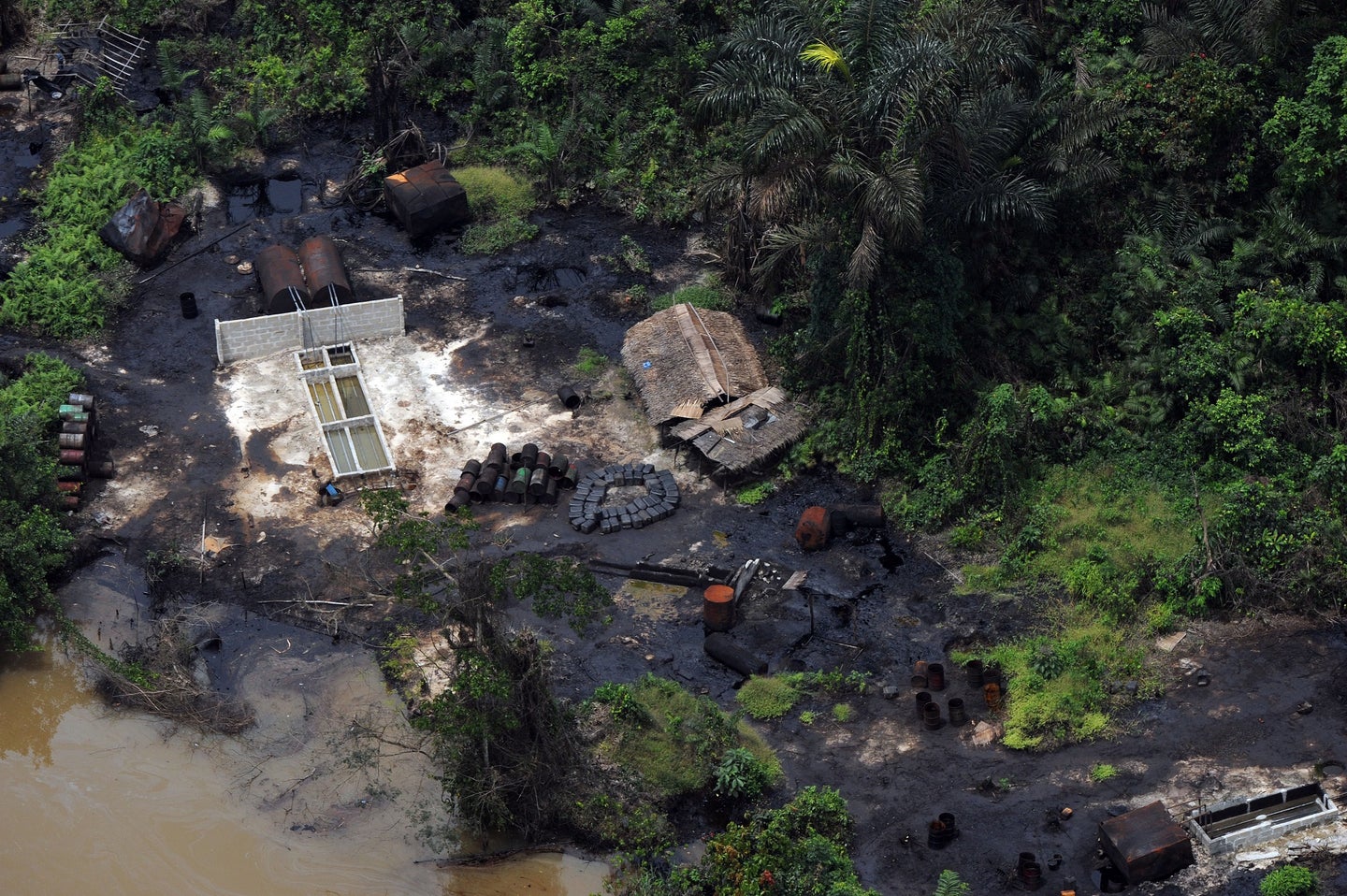 An illegal oil refining operation on the Imo River in the Nigerian Delta. Last month, an explosion at one of these makeshift facilities killed dozens of civilians. PIUS UTOMI EKPEI/AFP via Getty Images
SHARE

For many Nigerians, the deadly practice of illegal oil refining rings familiar. The siphoning, the “cooking,” and the accidental fires have been ongoing since 1958, when fossil fuel corporations began extracting crude oil and gas from the Niger Delta. But after an explosion on April 22 rocked the Abaeze forest and killed 100 people in the southeastern part of the country, it drew attention.

As news of the explosion in Imo state disseminated across various media platforms, the nation was thrown into what Nigeria’s president called “shock and trauma.” He said the incident was catastrophic and described it as a “national disaster.”

Illegal oil refining—popularly known as oil bunkering or oil theft—involves the siphoning off of crude fuel from pipelines often belonging to foreign companies, then transporting it to makeshift refineries hidden in bushes and forests several miles away by. The stolen goods are boiled in large metal containers by local refiners and distilled into products such as kerosene, diesel, and petrol. Once cleaned, it is sold around the country or exported abroad. Sometimes, however, the flames used to cook the crude oil get out of control, causing explosions.

[Related: The EU is struggling to phase out Russian oil and gas]

Philip Jakpor, a Nigerian environmental activist, says illegal oil refining is common and remains a major issue for Nigeria, despite the outcry every time there are casualties. “Many people are benefitting from the illegal business of oil bunkering including government and security officials, and communities in the Niger Delta region, and that’s why it has persisted,” the director of programs at Corporate Accountability and Public Participation Africa explains.

Explosions are not uncommon at illegal refining sites in communities in the Niger Delta, the country’s petroleum-rich region. But the consequences don’t end there. The practice has dealt a big blow on the national economy—crude oil accounts for approximately 90 percent of Nigeria’s revenue source—costing the country and its people billions of dollars in losses. “Apart from the lives lost in explosions, the Nigerian economy is also deprived of revenue,” Jakpor says.

Between January 2021 and February 2022, Nigeria lost more than 115,000 barrels to oil bunkering, totaling $3.27 billion worth of crude oil, according to the Nigerian Upstream Petroleum Regulatory Commission. A review of the Nigeria Extractive Industries Transparency Initiative, Oil and Gas industry report also showed that more than $270 million was lost to theft between 2016 and 2020. According to another report by the local media outlet Dataphyte, in 2020, the country lost more that 39 million barrels and at least $1.6 billion to crude oil theft and sabotage.

Despite its obvious implications on the economy, people’s lives, and the environment, illegal oil refining remains difficult for the Nigerian government to prevent. A number of factors feed into the dangerous practice, including unemployment, limited access to socio-economic opportunities, and tensions between oil companies and residents of the region over environmental disasters caused by the extraction of oil and gas. “These are poor people whose communities have oil, but do not enjoy any benefits and lack development so they engage in it,” Jakpor says. “They’re also the victims of the impact.”

A 2020 study by researchers at Newcastle University, UK, and Niger Delta University, Nigeria, shows how host communities are severely harmed by the activities of local illegal oil refiners, with the highest impacts on farmlands, estuaries, and rivers. “They ignore principles of environmental protection in refining the crude oil and empty the residue after cooking the crude into nearby rivers and water bodies,” says Oyinkepreye Lucky Bebeteidoh, a lecturer at the Department of Marine Engineering, Niger Delta University, and co-author of the study.

Bebeteidoh who lives in Yenagoa, Bayelsa, a major oil-producing state, worries that the decades of environmental damages caused by oil activities in the Niger Delta region may be difficult to reverse. But he encourages Nigerian leaders to incentivize the public to stop refining oil illegally and educate people on the environmental consequences. “The government must also provide basic amenities, including schools, roads, and hospitals in the communities,” Bebeteidoh says. He also adds that it should create policies and open up space in the Niger Delta for local refineries to participate in legal production. This would create more jobs and ensure proper regulation in the sector.

Jakpor, on his part, says that the Nigerian government must work seriously toward identifying the perpetrators of illegal oil refining and addressing the environmental impact on the Niger Delta communities. “It is a grim situation, and something drastic has to be done,” he notes.

A government spokesperson told PopSci that they are committed to cracking down on illegal oil refineries in the country. But they did not share any specific action plans.

Jakpor thinks changing the decades-old system would be a good way to start. “Nigeria must block the loopholes that allow the groups that siphon oil to operate unchecked. The political will of the government is key because stealing and cooking oil is not a business for the poor—the common people are only the foot soldiers,” he says.

Although foreign governments are aware of oil bunkering, they haven’t directly intervened in the illegal business, even after large-scale disasters like the one in Imo state. In recent years, international regulators have shown some interest in supporting Nigeria—but they need better intelligence and information on oil theft to step in. Meanwhile, multinational oil companies like Shell, which still holds billions of dollars in assets in the country, haven’t contributed much in ways of solutions. If the industry can engage with communities in the Niger Delta and provide them with more socioeconomic opportunities, then maybe it can start to mend its long history of neglect in the region.