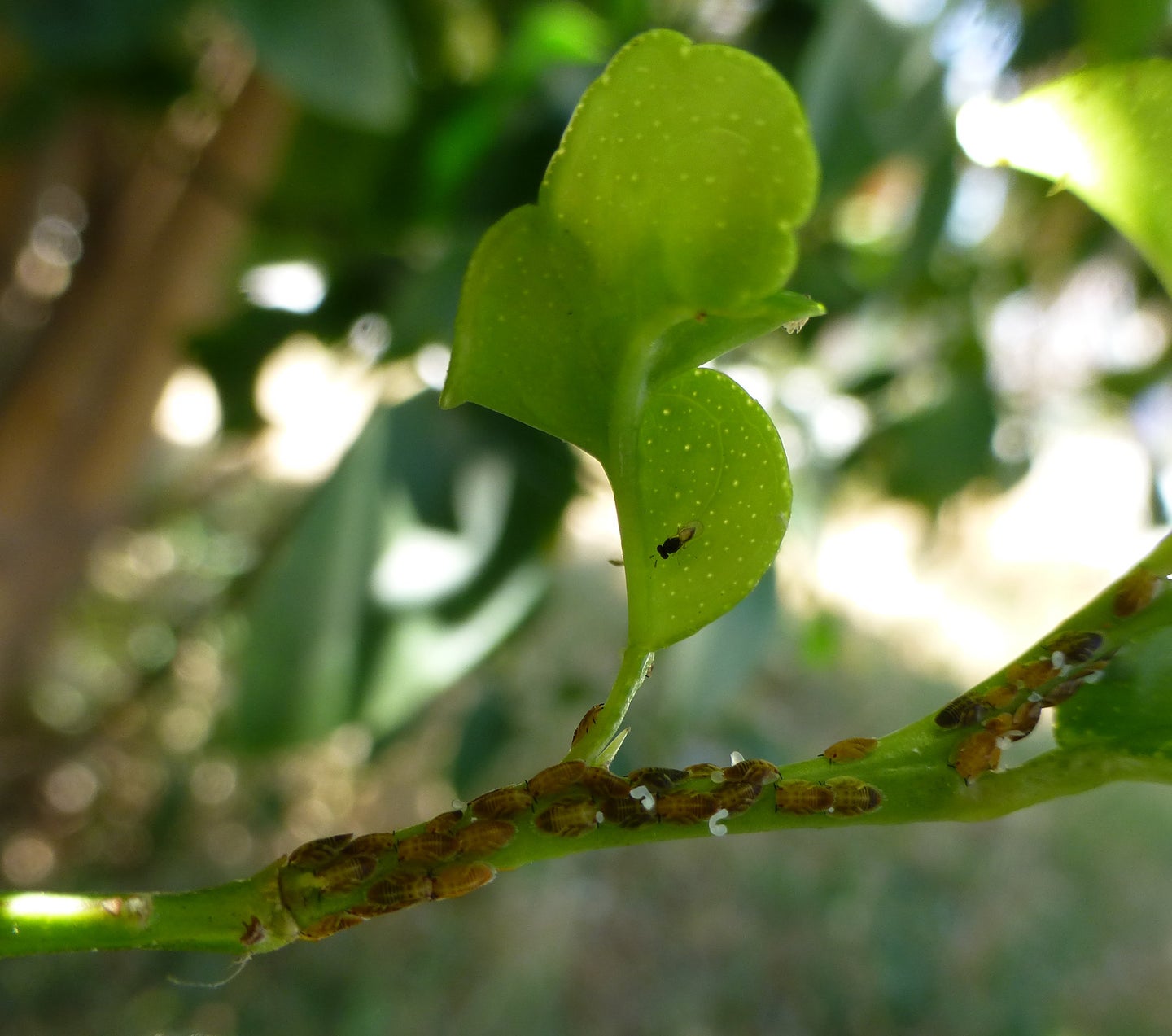 A Tamarixia wasp looks down on her prey. US Department of Agriculture
SHARE

On a hot Wednesday morning in early June, Joseph Bravata pulled a black SUV with federal plates into a suburban playground parking lot outside New Orleans. The asphalt was bounded on the north by a tangle of oak and tallow trees, and to the east it faced a subdivision with big lawns and wide streets. Bravata, the US Department of Agriculture (USDA)’s state plant health director, opened the trunk, revealing a white cooler which had arrived via FedEx the previous morning.

Inside were six clear plastic containers, full of stingless, parasitic wasps, each the size of a poppy seed. As the sun warmed the containers, the wasps sprung to life, and began bouncing up the sides of the plastic like popcorn.

The freshly excited wasps, called Tamarixia radiata, prey primarily on Asian citrus psyllids, gnat-like, sap-sucking insects. The tiny wasps lay eggs under the bodies of psyllid nymphs, and their larvae grow by eating the host and sheltering in its husk. A single female can eat at least 500 pests over her short life. These hunters are just one of dozens of species that the government has imported to the US to manage other newcomers—an invasive species management approach called biocontrol.

One by one, Bravata twisted off the container lids and—with a few taps of encouragement—the wasps disappeared into the warm breeze to look for prey. Scattered through the surrounding neighborhood were citrus trees—satsumas, kumquats, and oranges—all now home to psyllids. The psyllids are native to Asia, with populations distributed from Pakistan to Vietnam. While they cause minor damage to infested trees, these herbivores are also vectors for an incurable disease called citrus greening, which leaves fruit shriveled and bitter.

The Tamaraxia wasps are just one arm of the USDA’s biocontrol program, which aims to soften the blow of introduced species by raising and releasing their predators to the US. “It’s not rocket science,” Bravata says. “What nature gives us, we use as we can.”

Most of the time, the USDA’s invasive species programs are focused on keeping foreign species out—Bravata’s office monitors grain shipments and other cargo at the port of New Orleans for hitchhikers. But inevitably, life slips through the cracks, and the question becomes: How do you live with an invasive species?

Whenever a new pest shows up on US shores, USDA biologists are dispatched to the insect’s native home to find its local predators. That can involve hiking the woods of Siberia, or combing Taiwanese jungles. And even when an obvious predator doesn’t present itself, there’s growing interest in using fungi, bacteria, and other pathogens instead.

Entomologists working with the agency are typically looking for a predator that eats the pest and nothing but the pest. The risk is that a disaster like the cane toad could play out again. The cane toad, a Brazilian species that was introduced to Australia in 1935 to chow down on native sugarcane beetles, turned out to be a prolific hunter of all kinds of native fauna—now, the Australian government is researching how it might develop a second biocontrol agent to target the toads.

But parasitoid wasps, like Tamaraxia, are often a near-perfect tool. For nearly every insect on the planet, there is a parasitoid wasp that has evolved to target it specifically. A 2018 review estimated that there are between 400,000 and one million species of the parasitoid wasps (technically unrelated to more familiar stinging wasps, like yellowjackets), more than any other group of animals on the planet. And once the right species is located, researchers try to press their hyper-specialized diets into service.

The citrus psyllid first arrived in Louisiana in 2008, in a New Orleans backyard. It found a feast. The number of citrus trees in the city, Bravata says, is surprising: backyard satsuma trees, scraggly street trees in the French Quarter, mock oranges filling out front yard landscaping.

At first, there wasn’t a lot the USDA could do. Citrus greening became established in the city, with cases popping up years apart on both sides of the Mississippi River. But the real fear was that the disease would spread south and wipe out the last of the state’s venerable and threatened citrus industry. Psyllids can be killed with pesticides—Louisiana has approved two for home use, and a southern parish sprayed every single acre of orchard by helicopter in 2009—but not every backyard citrus grower wants their plants exposed to the chemicals.

Over the past 20 years or so, entomologists have fanned out across the globe, searching for “natural enemies” of the psyllid. One population of wasps was found in Pakistan, while others came from Vietnam and Taiwan. And in 2011, after years of prodding the wasps to see if they would eat native insects, the USDA gave the thumbs up for their controlled release. They’re raised in greenhouses in Texas and Florida, then sucked up and sent across the country for about $0.22 per female.

When a shipment of wasps finally came to Louisiana in 2015, Bravata says he was optimistic, but cautiously so. He’d seen other biocontrol programs fall flat, allowing pests to continue spreading.

The first Louisiana release took place at a mock orange in City Park, in the middle of New Orleans. “You could tap the plant, and you could literally see the psyllids fly off,” Bravata says. The program released every wasp available: 1,000 in all. “When we came back two weeks later, we could not find one psyllid,” he recalls. That’s when he got excited.

The beauty of the Tamarixia is that they find their targets as far as a mile away. But releasing Tamarixia radiata isn’t about achieving a competitive balance between wasps and the psyllids: it’s about harnessing nature to protect a crop. Because the goal is to wipe out the sap-suckers and the citrus greening they spread, the USDA has “saturated” the city with an excess of wasps.

Now, says Bravata, it’s challenging to find psyllids around the city. The program has moved out from the city of New Orleans, and is focusing on the surrounding area.  “We’re trying to find that line: where has it stopped? Because if we put some wasps out there, we can knock it back and keep it from spreading.”

For the foreseeable future, the wasp shipments will continue, along with work on quarantine facilities, and even disease-sniffing dogs—projects that the USDA has put at least $25 million into over the past decade.

Still, in a profession that’s often about holding back a never-ending tide of new insects, the success that comes with making common cause with a predator can feel like a breath of fresh air. “Sometimes it’s frustrating,” Bravata says. “Then you get one success, and you think, all this is worth it.”