A parasitic wasp from Russia could help American ash trees survive the spread of the emerald ash borer. 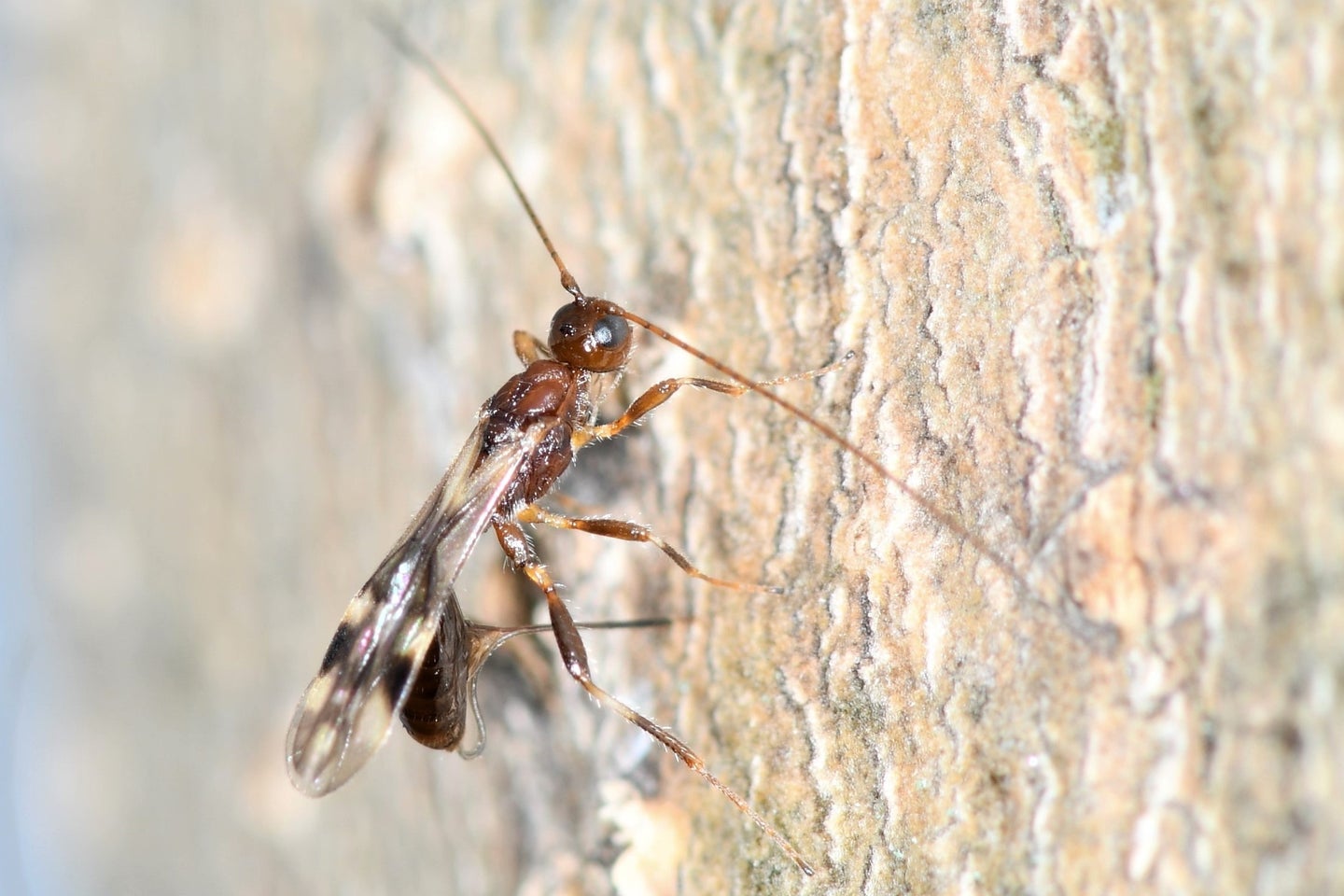 In the early 1990s, ash trees in Michigan began to die. By 2009, 99 percent of ash trees were gone, leaving forests full of bare trunks. The culprit, identified in 2002, was an iridescent beetle not much larger than a grain of rice, called the emerald ash borer. Ash borers are native to northeast Asia, and they lay eggs in the living inner bark of ash trees. As larvae grow, they feast on that bark, slowly encircling the tree and killing it.

Quarantine measures slowed the insect’s spread. But by now, the beetle has been spotted in most states. Late last year, the federal government lifted its quarantine altogether, conceding that the bug was here to stay. It looked like all nine species of North American ash would meet the same end as the American chestnut. An introduced fungus drove that tree species, once a crucial source of food, firewood, and cash for Appalachian families, to functional extinction in the early 1900s.

But another tactic to save ash trees seems to be bearing fruit.

Starting in 2007, the US began releasing parasitic wasps to kill the voracious beetles. Now, a five-year study from a US Department of Agriculture team demonstrates that a recently identified species of Siberian wasp can reduce ash borer populations by 75 percent in mature ash forests, setting the stage for their long-term recovery.

“Finally we see the light at the end of the tunnel,” says Jian Duan, the study’s first author and Agriculture Department ecologist, who has led research on emerald ash borer control for decades.

The circle of life

In China, Siberia, and Korea, ash trees and ash borers manage to coexist. East Asian ash trees have some innate defenses against the borer—they can kill off the wood around larvae, starving the insects.

But borers are much scarcer in those forests because they’re relentlessly hunted by wasps. Duan says that even imported American ash trees survive and grow huge on the streets of Beijing. “That gives us an indication that if we do it right, if we can maintain an optimal population of ash borers,” he says, “we can allow ash trees to recover.”

The parasitic wasps depend almost entirely on the emerald ash borer. Many of them were only discovered when Duan and other researchers hunted for natural predators of the beetle. One species lays its eggs on the ash borer’s eggs, while two others place their offspring inside the borer larvae. The young wasps then eat the beetle from the inside out.

One of those larva-eating species, Tetrastichus planipennisi, has proved effective in Michigan forests. There, young ash trees have begun to sprout in the places once occupied by their mature ancestors, and Tetrastichus preys on borers that attack the saplings.

But in the Northeast, where the ash borer is still moving in, Tetrastichus hasn’t been able to slow down the borer. That’s likely because there are more mature trees in the east, and the diminutive wasp’s two millimeter egg-laying tube (about as thin as two stacked credit cards) just isn’t big enough to reach through the bark.

Enter Spathius galinae, which a team of Russian researchers discovered in 2007, and which was approved for release in the US in 2015. Spathius is, by wasp standards, a goliath. It lays eggs with a four-to-six millimeter drill-like appendage (the width of a pencil) that can reach into even the thickest tree bark.

The wasps occupy two different ecological niches in Asia, Duan says, with Spathius dominating northern, old-growth forests, and the Tetrachus at home in young forests in China. Because the US biocontrol program seeks to recreate the ecosystems that keep ash borers in check, it makes sense that differently adapted wasps might be needed.

Once Spathius was approved in 2015, Duan’s team set several thousand loose in research forests in New York, Massachusetts, and Connecticut. But actually figuring out how the wasp affects ash borer populations presents a problem: the wasps spread so quickly that it’s impossible to find a wasp-free forest to use as a baseline.

Instead, the team stripped bark off of trees in the area, and tallied up what had killed the ash borers they found inside. “What happened to the larvae can be traced back with forensic examination,” says Duan. Some borer holes were excavated by woodpeckers, while others were full of wasp cocoons—a sign the transplanted predators had gone to work.

By 2020, Spathius had eaten so many ash borer larvae that beetles were spreading at just a quarter of their previous speed. There were still enough to infect new trees, but Duan suspects that by next year, the outbreak will be shrinking.

Still, some of the big ash trees in the research forests have begun to show signs of sickness. “This is a challenge with this program,” says Duan. “Even if you knock down the pest, the tree has already died, because we started the program a few years after beetle establishment. The first invasive wave, it’s very hard, it comes almost like fire.”

On the leading edge of the ash borer outbreak, wasp populations won’t build up fast enough to save every tree. Mark Abrahamson, with the Minnesota Department of Agriculture’s plant protection program, which has released half a million wasps since 2010, says that cities and towns will still need to treat or remove individual trees as they get sick. It’s a “management tactic that’s suited for forested situations, but not urban landscapes” where trees are relatively spread out, he says.

The goal of the biocontrol program is to establish long-term ecological relationships that allow ash trees to live alongside borers, as they do in their native range. “What we are really aiming for is to maintain the pest at low density,” says Duan. “So that the surviving ash trees, the ones that are not killed, will recover.”