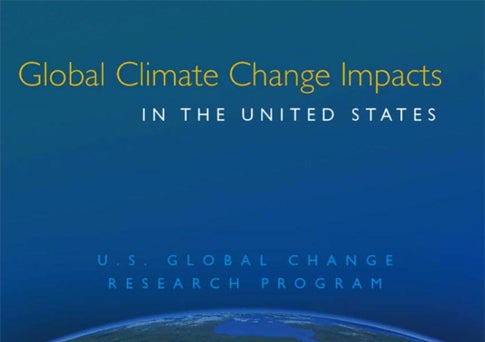 For years, scientists have been talking about the future impact of global warming. Well, according to a new government report, the future is now. The report claims that heat waves have increased in the Northeast, droughts have increased in the Southwest, coastline has eroded, and adds that “global warming is unequivocal and primarily human-induced.”

The report, produced by the United States Global Change Research Program, is the third report put out by the program since a 1990 law required a published evaluation of climate change every decade. This report, compiled primarily during the Bush administration, confirms that many of the predictions made in the 2000 report are now indeed coming to pass.

In addition to the climate-related effects already occuring, the report projects that increased warming will result in the spread of disease, decreased hydroelectric power production, added pressure on agricultural resources, and even changes to the nation’s social fabric.

“Climate change will combine with pollution, population growth, overuse of resources, urbanization, and other social, economic, and environmental stresses to create larger impacts than from any of these factors alone,” says the report.

The report also comes down strong on the anthropogenic side, saying, “global temperature has increased over the past 50 years. This observed increase is due primarily to human-induced emissions of heat-trapping gases.”

The report even breaks the impacts down by region, so you can see what impact global warming will have in your specific neck of the woods.

One interesting point is how the tone has shifted, from preventing climate change to mitigating its effects. For example, the New York Times quotes Thomas R. Karl, director of the National Climatic Data Center at the National Oceanic and Atmospheric Administration and a principal author of the report as saying, “Our destiny is really in our hands. The size of those impacts is significantly smaller with appropriate controls.”

Ultimately, the report mainly repeats what the 2000 report said. However, for the dire conclusions of that earlier report to be confirmed is a big step in getting past “debates” over warming that bogged down earlier attempts to avert calamity.