Global Warming: a Controversial Bill, And a Game of Roulette

A strict emissions bill makes it out of committee, and a new paper predicts dire consequences for inaction 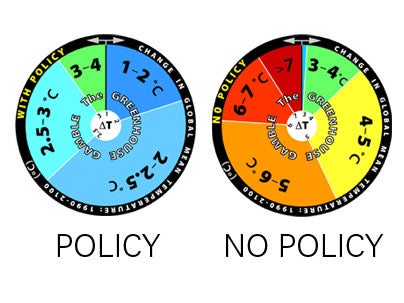 To illustrate the findings of their model, MIT researchers created a pair of 'roulette wheels.' The wheel on the right depicts their estimate of the range of probability of potential global temperature change over the next 100 years if no policy change is enacted on curbing greenhouse gas emissions. The wheel on the left assumes that aggressive policy is enacted. courtesy MIT Joint Program on the Science and Policy of Global Change
SHARE 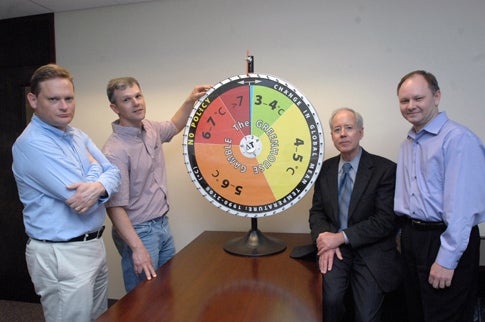 Ronald Prinn, director of MIT’s Center for Global Change Science, and his group have revised their model that shows how much hotter the Earth’s climate will get in this century without substantial policy change. Standing with the group’s “roulette wheel” are, from left to right, Mort Webster, professor in the Engineering Systems Division; Adam Schlosser, principal research scientist at the Center for Global Change Science; Prinn, the TEPCO Professor of Atmospheric Chemistry; and Sergey Paltsev, principal research scientist, MIT Energy Initiative.

It’s time to call your bookie, because the line on global warming is in. A new paper from MIT breaks down the odds of different outcomes from global warming, based on whether governments take action now or later. And if you’re taking that action, bet on “government getting involved” to beat the spread, as last week an important climate change bill made it out committee in the House of Representatives.

The bill, named the American Clean Energy and Security Act, would institute a cap-and-trade program, and reduce carbon emissions by 17 percent over fifteen years. The plan also calls for increased research into alternative energy, and provides $750 billion in subsidies to consumers to help offset the increase in energy cost the bill would cause.

Now, before you smelly hippies start planning a bonfire party to celebrate, or you thoroughly confused climate-change deniers start complaining about impending socialism, everyone should note that the bill still has a long way to go before it becomes law, and will likely undergo substantial changes as it passes through the sausage factory that is the U.S. Congress. Additionally, The Wall Street Journal and The Economist both point out that the bill is full of loopholes and weak provisions for enforcement.

However, it is good that someone is doing something. The new analysis from MIT predicts that if governments don’t act, climate change could get twice as bad as previously predicted. The study looked at the odds of different levels of climate change in scenarios with and without a change in greenhouse gas emission. Needless to say, the study says the outcome is worse when no action is taken. To help illustrate that point, the authors devised these cool looking roulette wheels with the odds of different temperature changes. To help understand the wheels, check out Andy Revkin’s New York Times blog where he explains how to read the illustration.

Also, for the more audio-inclined, National Geographic reports that seismologists can actually hear the results of global warming, in the form of increased noise in their Earth-monitoring microphones. While the NatGeo article doesn’t mention what global warming actually sounds like, I’m sure Pitchfork will give it a 4.3 and claim it wasn’t as good as global warming’s earlier stuff.

To illustrate the findings of their model, MIT researchers created a pair of ‘roulette wheels.’ The wheel on the right depicts their estimate of the range of probability of potential global temperature change over the next 100 years if no policy change is enacted on curbing greenhouse gas emissions. The wheel on the left assumes that aggressive policy is enacted.
news
politics