The Arctic’s permafrost contains twice as much carbon as the atmosphere. But as global temperatures rise, the frozen ground is melting fast and releasing greenhouse gases. Are we trapped in a deadly cycle? 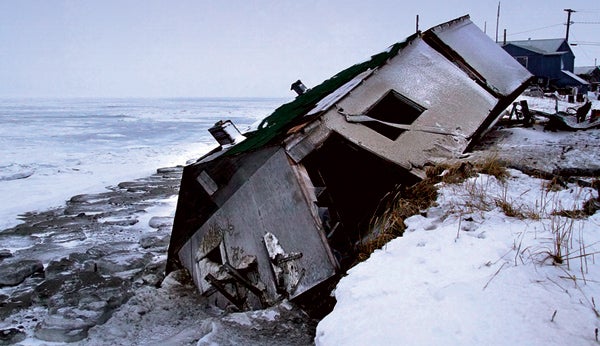 One hundred thirty miles north of Nome, a small coastal village on Sarichef Island is feeling the effects of climate change. Shishmaref, Alaska, is falling into the sea. Rising temperatures are melting the permafrost, the layer of frozen ground beneath the surface. Without this firm base, waves have eroded the land on which Shishmaref’s villagers make their home. They must relocate their houses inland or start all over somewhere else.

Nowhere is global warming having as obvious an impact as in the Arctic, and people living in Alaska, northern Canada, northern Scandinavia and Siberia have front-row seats. Some experts say that temperatures in these regions have risen by 3˚ to 5˚F over the past 30 years. And the temperature in the Arctic has warmed at twice the global average rate in the past century, according to the 2007 Intergovernmental Panel on Climate Change (IPCC) report. Permafrost is ground that maintains a temperature below freezing for at least two years. In some areas, that frozen layer is thawing, causing roads to collapse, runways to crack, and homes to sink, split apart, or even fall into the sea. But inside that icy ground is a threat more dangerous than crumbling infrastructure: massive amounts of greenhouse gases that, if released into the atmosphere, have the potential to quickly intensify climate change.

The soil, rock and sediment that make up permafrost are divided into two layers. The top, known as the active layer, runs slightly less than one foot to several feet deep and thaws every summer. The bottom layer remains solid year-round. Thickening of an area’s active layer indicates that the frozen ground beneath it is melting.

Continuous permafrost dominates the northern stretches of the Arctic, where temperatures are coldest. South of this area, permafrost breaks up into patches that make up the discontinuous zone. Places with even less permafrost comprise two more zones, called sporadic and isolated. Far north, where the permafrost is continuous, the lower layer is stable, extending hundreds and even thousands of feet down—2,400 feet in some parts of northern Alaska and as much as 5,000 feet in northern Siberia. But in the more southern, discontinuous reaches of the permafrost zone, the frozen layer is only a foot to several feet thick, making it susceptible to warming temperatures. 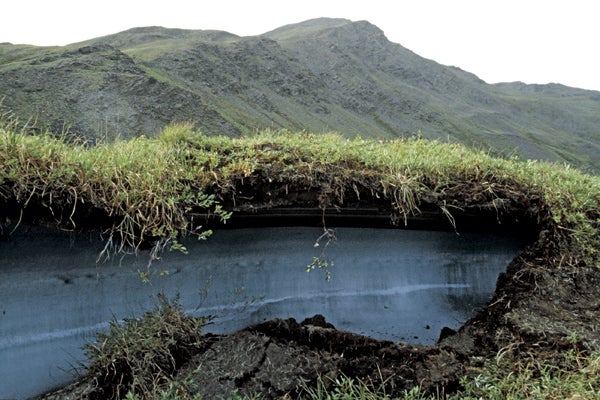 This ice wedge shows the ground cut away along one edge, exposing its long side. The ice wedge extends deep into the ground.

Permafrost contains carbon, accumulated from the decomposition of plants and animals over tens of thousands of years. Last September, researchers at the University of Florida estimated that more than 1,800 billion tons of carbon are stored in northern permafrost—twice the amount in the atmosphere today. In its frozen state, organic matter decays very slowly. But as the temperature rises and permafrost melts, the material breaks down rapidly, releasing carbon into the atmosphere.

When organic matter degrades in dry air, carbon dioxide is emitted. And in wet soil or underwater, where there is little or no molecular oxygen, anaerobic bacteria break down the organic materials and give off methane. Both CO2 and methane are greenhouse gases. As they are released into the atmosphere from permafrost, scientists predict that a disastrous cycle will emerge: The gases will trap hot air, raising the air temperature and melting the permafrost, releasing more carbon and further heating the planet.

According to a measure used by the IPCC called Global Warming Potential, methane will be responsible for producing 25 times as much heat as CO2 over the course of this century. But “there is going to be a significant impact whether carbon is released as CO2 or as methane,” says Edward Schuur, an ecosystem ecologist and lead author of the University of Florida study. Although methane’s molecular structure allows it to trap heat better than CO2, it is released more slowly into the atmosphere and dissipates at a faster rate.

Based on their current computer climate models, scientists can’t yet pinpoint just how much carbon will be added to the atmosphere as a result of thawing permafrost. That depends on complex factors like the degree and speed of the thaw and changes that could offset permafrost emissions, such as an increase in CO2 absorption from new vegetation.

But scientists do know that the thaw and the release is happening much faster than previously predicted. According to new research by Katey Walter, an aquatic ecologist at the University of Alaska, naturally occurring permafrost-thaw lakes in Siberia are already bubbling out nearly four million tons of methane a year—five times as much as predicted. As temperatures rise, the lakes are growing faster. Between 1974 and 2000, the number and size of the lakes increased by almost 15 percent and methane emissions shot up by almost 60 percent.

The Heat Is On

Just how much warmer will it get? Computer climate models project that temperatures in the Arctic will increase by 3.6˚to 16˚ by the year 2100, according to the IPCC report. But for now, the consequences of global warming are most obvious in the discontinuous zone. Here, where frozen ground is thinnest, annual average temperatures approach 32˚.

Consider, for example, the changes taking place in Fairbanks, Alaska, a city with a population of around 34,500 just south of the Arctic Circle. The average annual temperature range is typically between 23˚ and 28˚ here but will probably increase by as much as 4˚ by 2050, according to a World Wildlife Federation report from last April. Depending on how climate-change scenarios play out by the end of the century, Fairbanks, which is already feeling the effects of the permafrost thaw, could see a 12˚ increase in temperature.

In Manitoba, Canada, temperatures have risen by 2.3˚ since 1970. In some areas, the southern limit of the permafrost zone is retreating north at a startling rate of one foot per year. Phil Camill, an ecologist at Carleton College, who is monitoring the effects of the thaw in Manitoba, estimates that if warming continues at present rates, all the permafrost in the five sites he studies will melt by 2100. The amount of carbon that will be released into the atmosphere remains to be seen.

Warmer climates with less frozen ground are changing Earth’s northern landscape. The shape of these changes depends on the physical makeup of the region. Some peatlands and low-lying tundra can turn swampy, whereas upland tundra areas and forests with good drainage often dry up after a melt. Exceptions certainly exist, and more observational studies are necessary to predict how permafrost thaw will affect the saturation of different areas. 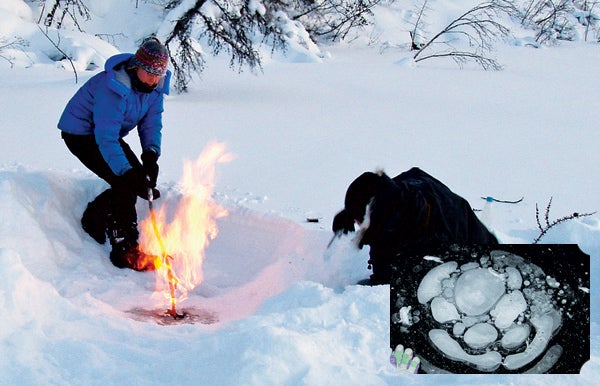 Important data come from the sub-Arctic peatlands of northern Sweden, where permafrost measurements and aerial photographs have recorded ground thaw and resulting vegetation changes since 1970 at the Stordalen mires, a boggy area more than 800 miles north of Stockholm. Melting permafrost has resulted in much wetter conditions, and some water-loving plants are replacing those that thrive in a dryer environment.

Different plants take in and release varied amounts of gases over their life cycle. Although the vegetation that has appeared in Stordalen has increased carbon absorption there by 13 percent since 1970, methane emissions from decomposing plants, which have been exposed by melting permafrost, still outpace that carbon uptake, according to work by Torben R. Christensen, a biogeochemist at Lund University in Sweden. His calculations show that methane output at the Stordalen mires rose by 22 percent over the past 30 years. Studies suggest that Stordalen’s plight is similar to warming trends throughout northern Sweden and parts of Alaska and Canada.

In some areas of the Arctic tundra—which is typically barren or sparsely covered with low-lying vegetation like moss and lichens—trees and especially shrubs, which spread quickly, have begun to invade as the ground softens. This so-called shrubification is changing the landscape, with unknown consequences. These plants will take in CO2 from the atmosphere, but they’ll also release it as they die and decay.

In areas once covered by snow and ice, which reflect heat from sunlight, encroaching plant life has altered the albedo, or reflectiveness, of the region. Plants absorb sunlight for photosynthesis. This traps heat close to the ground, which further increases air temperature and melts permafrost, in turn releasing carbon into the atmosphere.

How much permafrost will thaw between now and 2100, and what will be the result? Using the IPCC climate forecasts, David Lawrence of the National Center for Atmospheric Research in Colorado predicts that between 60 percent and 90 percent of the top 10 feet of Arctic permafrost could completely thaw in the next 100 years. But different modeling systems produce different results, and Lawrence’s figures are at the high end of the range.

The Arctic landscape—with its varieties of vegetation and topography—is notoriously hard to model. Unknown factors, such as future temperature and snowfall trends, increase the margin of error. Higher temperatures can increase precipitation in the form of snow. Ironically, extra snow cover may insulate permafrost from cold air in the winter, contributing to the thaw. Conversely, new moss growth in warmer, wetter areas could protect permafrost layers from melting under the sun’s rays in the summer, but it’s unclear whether or not this will be enough to counteract continued global warming. “In particular, methane emissions from permafrost regions remain a wild card in the global climate system,” Christensen says. “We urgently need more studies to reduce the uncertainties.”

A report published last September offers hope that the melt may not be as drastic as some suggest. While working in Canada’s central Yukon Territory, Duane Froese, an earth- and atmospheric-sciences professor at the University of Alberta, found 740,000-year-old volcanic ash on top of a formation called an ice wedge in a layer of permafrost. The ice must be older than the ash above it, meaning it predates Earth’s last major warming period—the interglacial era that occurred 120,000 years ago—by hundreds of thousands of years. The implication: Even severe global warming may not melt every frozen region on Earth.

With such preliminary and sometimes contradictory information, it’s hard to predict the rate of permafrost thaw. “The challenge is to incorporate the key processes into our ecosystem and carbon-climate models,” Lawrence says. Better modeling systems are in the works in several research centers around the world, and the results should appear in the next IPCC report in 2013 or 2014. In the meantime, residents of towns like Shishmaref will have to seek firmer ground.

In Canada, scientists recently found an ice wedge that survived Earth’s last major warming cycle 120,000 years ago, suggesting that even extreme climate change may not wipe out all of the planet’s frozen matter. But what exactly is an ice wedge?

During the long Arctic winter, frozen soil on the tundra can crack from the extreme cold. In the spring, water from melting snow fills the cracks and then freezes again because of the surrounding permafrost. The ice narrows and tapers to a point, forming the appearance of an underground icicle, or ice wedge.

Each year, this cycle repeats and the ice wedges get bigger. If one is exposed to the air in warm months, it can melt. The melting causes thaw lakes, which release methane into the atmosphere. As Arctic temperatures rise, thaw lakes get bigger and emit more methane.