The future of allergy treatment could be as easy as brushing your teeth. 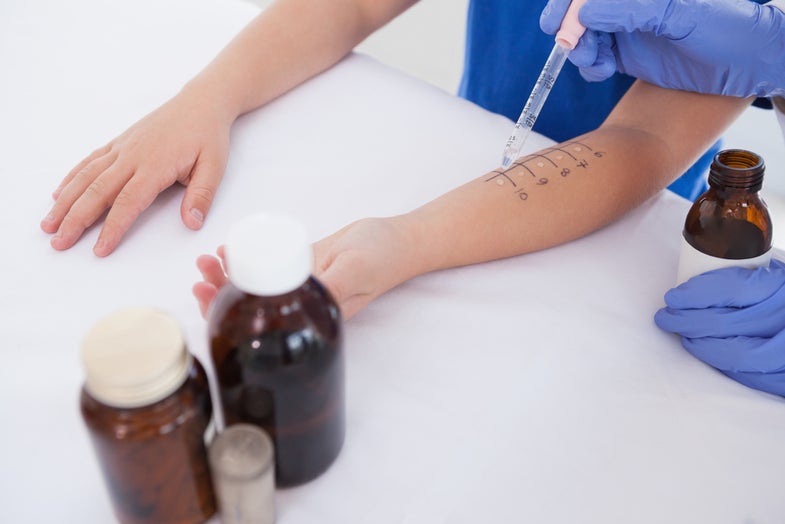 Allergies are unpleasant. Just ask anyone who equates the advent of spring with a runny nose or the presence of a cute puppy with itchy eyes. Unfortunately, most allergy treatments—which tend to involve lots and lots of needles—are as unpleasant as the allergens themselves.

But there’s a new option on the market: Allerdent, an allergy desensitizing toothpaste. While it’s not as widely available as traditional methods, the toothpaste seems to offer an easy (and poke-free) alternative to the age-old problem of respiratory allergies. And the allergy experts behind Allerdent aren’t stopping there. They hope to tackle food allergies, too. Brushing your problems away may sound too good to be true, but many in the field believe this paste has promise.

In the United States today, most patients with severe respiratory allergies submit to an allergy shot regimen. First, a physician conducts a skin prick test to determine the specific irritants to which a patient is sensitive. Once they’ve identified those allergens, the doctor mixes up custom shots with small amounts of the irritants, which they pump into the patient’s arm in increasingly high doses. It sounds cruel, but the “immunotherapy,” as this process is called, aims to train a person’s immune system to react normally to otherwise harmless substances like pet dander or dust mites.

Immunotherapy works a lot like a vaccine, which teaches the immune system how to respond to pathogens by safely mimicking an invasion, and the results are just as impressive. While allergy shots don’t typically cure existing allergies entirely, they can dramatically reduce reactivity, allowing people to go places and do things they couldn’t manage comfortably before. Unlike most vaccines, however, immunotherapy isn’t just a standalone injection. Patients go to their allergist’s office for more shots every week for three to five years.

To the surprise of no one, patients aren’t really in love with this system, despite its benefits. “What I saw in my practice was it was hard to get people to come in for their allergy shots,” says William Reisacher, an allergist at Weill Cornell Medicine and the creator of Allerdent. This was especially true with younger patients, he says. Kids and adolescents stand to benefit the most from allergy shots—immunotherapy has been shown to stop childhood allergies from evolving into full-blown asthma—but only if they actually make it in every week. “About 5 or 6 years ago, I set the task to figure out a way to apply immunotherapy… [that] would fit seamlessly into [patient’s] lives,” Reisacher says. 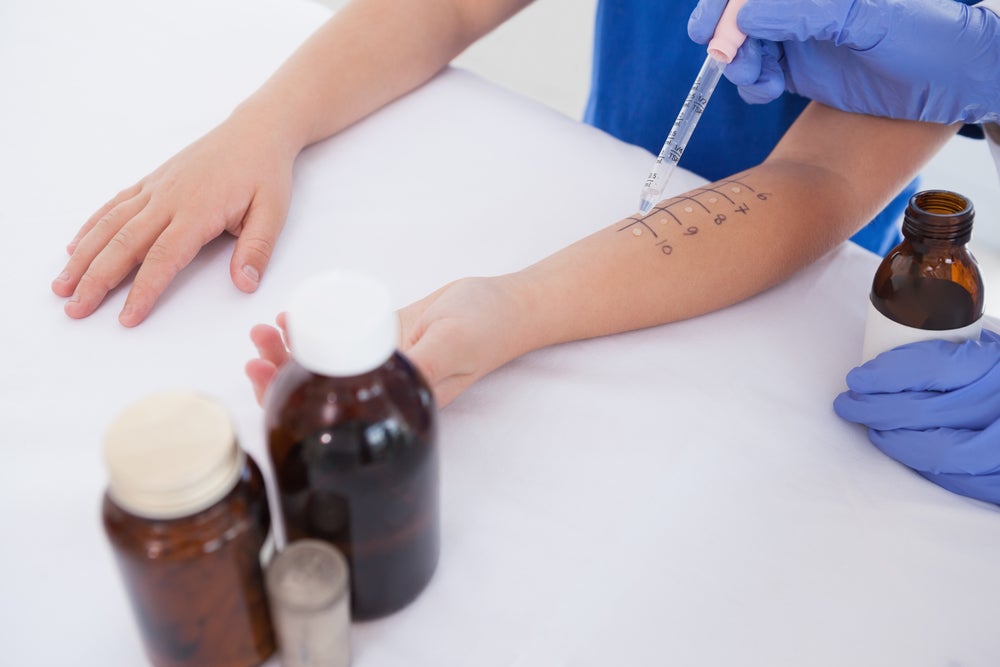 Doctor performing a skin prick test on a patient

While he was open to any delivery method for his innovative new immunotherapy product, Reisacher found himself focusing on oral routes for desensitization. In Europe, allergy shots are already passe. Most doctors there have moved on to the newer (but not necessarily more comfortable) sublingual method of immunotherapy. For a few minutes each week, patients hold a desensitizing serum below the tongue. When they’re done, they spit the liquid out, and repeat the process at their next appointment. While it doesn’t involve needles, sublingual therapy comes with its own aches and pain: Swallowing any of the allergenic compounds—which happens very easily, especially with kids—can irritate cells in the esophagus, triggering acid reflux.

Despite its penchant for upsetting stomachs, Reisacher knew the sublingual application had one major advantage: Allergens slosh around in close proximity to immune-regulating cells, which live in high concentrations in the mucous membrane of the mouth. “I was thinking about this when I was brushing my teeth at night, and I saw that foam building up on all of those important parts,” Reisacher says. And thus Allerdent, a pioneering oral mucosal immunotherapy, was born.

Doctors who prescribe Allerdent can buy a kit from Allovate, a New York-based biopharmaceutical company Reisacher works with. It comes with a thickened paste that, when combined with the liquid desensitizing serums in every allergist’s refrigerator, turns into a toothpaste. “I mixed up a whole bunch of different concoctions on my own,” Reisacher says of the early days testing Allerdent. The first prototypes weren’t paste at all. Some were totally liquid, others were like cement balls. Now, he says, “it’s the perfect consistency,” and, like regular toothpaste, cleans your teeth.

The idea is that patients use two dollops of the toothpaste, which comes in a pre-metered pump, daily in lieu of a weekly allergy shot. The toothpaste typically includes six to 10 of a patient’s key allergens; any more than that, Reisacher says, and the efficacy of the desensitization treatment may go down.

Clifford Bassett, an allergist at New York University, doesn’t yet prescribe Allerdent to his patients. But he says the basic concept seems sound, as it builds directly on existing immunotherapy delivery systems. Allerdent appears to be “a good alternative… for many individuals who can’t honestly commit to coming to an allergist’s office to receive the shot-based immunotherapy,” Bassett says. But more research is needed to demonstrate the paste’s true success, he says. Bassett notes the scientific literature on Allerdent is largely limited to one small but promising study, published by Reisacher and his team in the journal Allergy & Rhinology in 2016. “It’s somewhat early,” Bassett says, but he’s confident more research will come.

For pollen-plagued patients sick of their allergy shot regimen, Allerdent might seem worth moving forward with, even in its early stages. The one obstacle they may face, however, is access. “The extracts that are used in this treatment, just like the extracts in shots, are FDA approved,” Reisacher says. But the FDA has only approved these extracts in shots. That makes Allerdent an “off-label” usage, which insurance companies don’t typically pay for. While prices vary (the cost is set by your prescribing physician, not Allovate), Reisacher compares it to a Starbucks coffee a day.

And that’s if you can even get your hands on it. “In the United States in general, we’re a little bit slower to innovate than other parts of the world. And I think a lot of general allergists, their economics are really reliant upon injections in their office,” Reisacher says. “While it may be good to have other options for the patient, it may not be good for the economic health of their practice… [Some doctors say,] ‘I need 250 people on shots, and my office hums along nicely.’”

Allerdent’s availability remains spotty, but patients can always ask their allergists to consider offering the product. Workarounds aren’t really available, as you’ll need your doctor’s insight on what allergies are actually plaguing you, and what dosage is right for your specific immunotherapy needs. Peanuts. Close up of fried, peeled and salted peanuts.

Looking forward, Reisacher hopes to expand the presence of oral mucosal immunotherapy in allergy clinics across the country. But he’s also working on another immunotherapy toothpaste, this time for peanut allergy sufferers. Intrommune Therapeutics, where Reisacher serves as senior scientific advisor, recently announced it plans to take INT-301, as the peanut toothpaste is called, to the FDA for an Investigational New Drug review. If the toothpaste passes numerous tests of safety and efficacy over the next three to five years of investigation, INT-301 won’t be off-label: it’ll be a billable immunotherapy tool in its own right. Patients will probably never be cured of their peanut allergy—the goal of INT-301 is decidedly not peanut butter sandwiches for all—but the toothpaste could help them withstand accidental exposures, which typically requires emergency room treatment.

While the road to mass-marketability hasn’t been easy, Reisacher is confident oral mucosal therapy will soon be on the tip of everyone’s tongue—literally. “It’s always difficult when there’s something new on the market. There’s always resistance to trying new things and it’s just a matter of time of gaining experience with it,” says Reisacher. Prick-resistant patients are sure to rejoice.

This story has been updated for clarity. Patients must go through their physician to get Allerdent and other immunotherapies, and the treatment does not come in a brick, but a thickened paste.