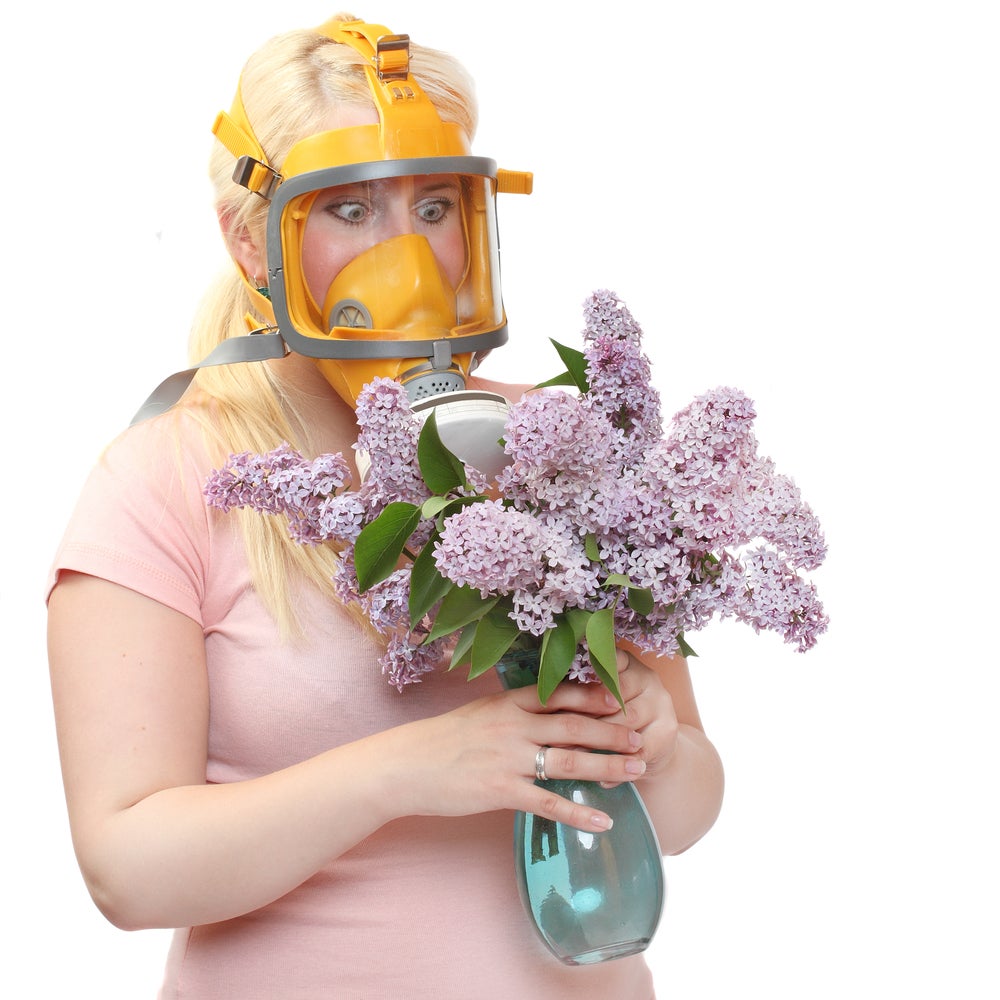 Ok, lady. We get it. Allergies suck. Deposit Photos
SHARE

This post has been updated. It was originally published on May 1, 2018.

Each year, approximately 50 million Americans suffer from allergies, according to the American College of Allergy, Asthma, and Immunology. Their suffering can take many forms, from the seasonal snifflers who track the ups and downs of the pollen count like the stock market, to food allergy sufferers who must guard against peanuts or eggs or strawberries year round.

Allergies have become so common a cause for concern and conversation that the word seems to almost have lost its meaning—assuming it ever had one. “People use the word allergy to describe anything they just don’t like,” says William Reisacher, a doctor and professor of head and neck surgery at Weill Cornell Medicine. “I had a patient who came in with an upper respiratory illness. She says, ‘I think I have allergies.’ I said, ‘No, it’s a cold, this is a virus.’ And she said, ‘Well I’m allergic to the virus.'”

Coined in 1906 by the Viennese pediatrician Baron Clemens von Pirquet, “allergy” is a combination of the Greek word “allos,” which means changed, and “ergon,” which means reaction. “The word just means ‘different reaction.’ That’s it,” Reisacher says. The idea was at first rejected by the medical community, but von Pirquet’s work ultimately came to redefine our perception of immunology. (Our immune system, it turns out, can hurt us even as it tries to protect us.)

Doctors weren’t the only ones to incorporate this amorphous, enticing, and downright fashionable phrase into their vocabularies. As Juan Manuel Igea wrote in a 2013 article in the journal Allergy, “the word [allergy] has long ago escaped from physicians and gone to the streets, where it is popularly used also as synonymous with antipathy and rejection.”

[Related: How to tell seasonal allergies from COVID-19 symptoms]

Today, there are still plenty of mysteries left for allergists to solve. Still, Reisacher says, doctors have spent the last century studying how mild and severe allergies really work at a cellular level and can offer their patients real, concrete explanations of their illness and, increasingly, real solutions. But first, we’ve got to start using this word correctly. Here’s how.

Today, common allergies are typically defined by the presence of immunoglobulin E, or IgE, antibodies. Basically, allergenic material like pollen binds to IgE antibodies and, in a sensitive person, trigger the release of histamines. Histamine binds to cells inside your body and, in enough quantity, can cause sneezing, itching, and other symptoms of seasonal allergies. That’s why many people take Benadryl or other “antihistamine” drugs to stop the reaction in its tracks. It’s also what makes a legitimate allergy—the result of an aggressive (and maybe even misguided) immune system response to a fairly common compound.

Seasonal allergies, like the kind you’re probably starting to experience right now, are very real allergies. Called allergic rhinitis or hay fever, this allergic reaction emerges in the spring and summer, as pollens and mold spores are released in a frenzy of botanical sex—and easily inhaled by nearby noses. In sensitive individuals, these minute materials can result in severe irritation, including runny nose, itching, sneezing, congestion, and even full-body fatigue.

Perennial allergic rhinitis, meanwhile, plagues people all year long. Symptoms of itching, sneezing, and congestion are triggered by dust mites and cockroaches, cat and dog dander, and mold. Sometimes sensitivity to certain foods can trigger these symptoms as well.

At a mechanical level, food allergies can work roughly the same way as allergic rhinitis. But this IgE-mediated response is typically much more aggressive. When some people are exposed to an allergen, they skip itchy eyes or hives and go straight into anaphylaxis. The body releases so many histamines that the airways tighten, the tongue and throat swell, and blood pressure drops. “Some people, when they’re exposed to food they’re allergic to, those cells that hold histamine release all at once,” Reisacher says, “and that causes blood vessels to leak.” Without medical intervention, many people in anaphylactic shock may die.

While many allergens could, in theory, cause anaphylaxis, there are a few allergies that are known to kill. This includes latex, penicillin and other drugs, and insect stings. Most of the problems, however, come from a few clusters of food allergens: nuts, fish and shellfish, eggs, soy, and milk.

Most of these food allergies seem to occur organically, but there’s at least one you can catch. That’s the mammalian meat allergy, an allergic reaction to red meat caused by the bite of an infected Lone Star tick. As PopSci explained in an article on the subject, a nibble from this particular insect can cause humans to become allergic to a carbohydrate called galactose-alpha-1,3-galactose (called alpha-gal). When an infected person eats beef or pork, their body will trigger an IgE-mediated response, histamines and all.

Food intolerances are different from food allergies. In fact, they’re not technically allergies at all. When dealing with skeptical waiters or traveling in other countries, saying “allergy” remains the surest way to keep a given ingredient off your plate. But food intolerances, while often horrible, don’t typically kill.

[Related: Invasive fire ants may be our best hope against ticks that cause red meat allergies]

Take milk. For people with milk allergies, a splash in their cereal can trigger an immune response that results in hives, itchy skin, and, yes, even anaphylaxis. More common, however, is lactose intolerance. A splash of milk in the cereal of a lactose intolerant may result in cramps, constipation, or diarrhea, but that’s about it. The difference is that for people with milk allergies, milk triggers the production of histamines, while people with lactose intolerance just aren’t producing enough lactase enzymes to break up the lactose in milk once it hits their hungry tummies. And many food intolerances, while a legitimate source of digestive woes, may not yet have a clear biological source, like my own allium intolerance, which makes garlic, onion, and their ilk an intestinal menace.

Not all allergies come from ingestion, injection, or inhalation. Allergic contact dermatitis occurs when a sensitive person’s skin comes into contact with an allergen. Everything from latex gloves to nickel, poison ivy to makeup can cause such a reaction. In cases like these, the reaction typically remains at the surface. A person may see their skin growing bumpy, scaly, or red in response to the allergenic compound, which can take weeks to clear. But these reactions can also be more serious. Exposure to poison ivy and, in particular, latex can result in anaphylactic shock.

One allergy has dominated the public discourse in the past few years—despite not being an allergy at all. Celiac disease, which causes a severe reaction to gluten, a cluster of proteins found in wheat, affects approximately 2 million Americans. But it’s not an IgE-mediated food allergy; it’s an autoimmune disorder.

People with celiac describe many upsetting symptoms, from fatigue to nausea after eating gluten. Some of these overlap with symptoms of food allergies or intolerances. But the primary symptom of celiac is totally different. For people with celiac, injesting gluten causes the body to attack its small intestine, preventing proper nutritional absorption. Where most people will have a complete recovery after an allergic response that’s properly treated, people with celiac struggle with brittle bones (from not digesting calcium properly), anemia (ditto on iron), and other related health issues. Research also indicates they may be at an increased risk of cancers like intestinal lymphoma as a result of their disease. Benadryl won’t work on this “allergy”—histamines aren’t to blame.

What does it matter?

In the century since von Pirquet first coined the term allergy, doctors have worked tirelessly to understand allergic response, immune disorders, intolerances, and related problems. They’ve made significant strides in the diagnosis and treatment of pernicious problems, from life-threatening peanut allergies to the everyday pain of pet dander sniffles. But much on the margins—garlic intolerance, anyone?—remains shrouded in mystery. Using the word “allergy” correctly will remain important for diagnostic purposes, but talking openly with your doctor about managing these problems, should you have them, matters even more. Who knows what new discoveries will be made in that process?