A curved line marked the planet's surface for four days 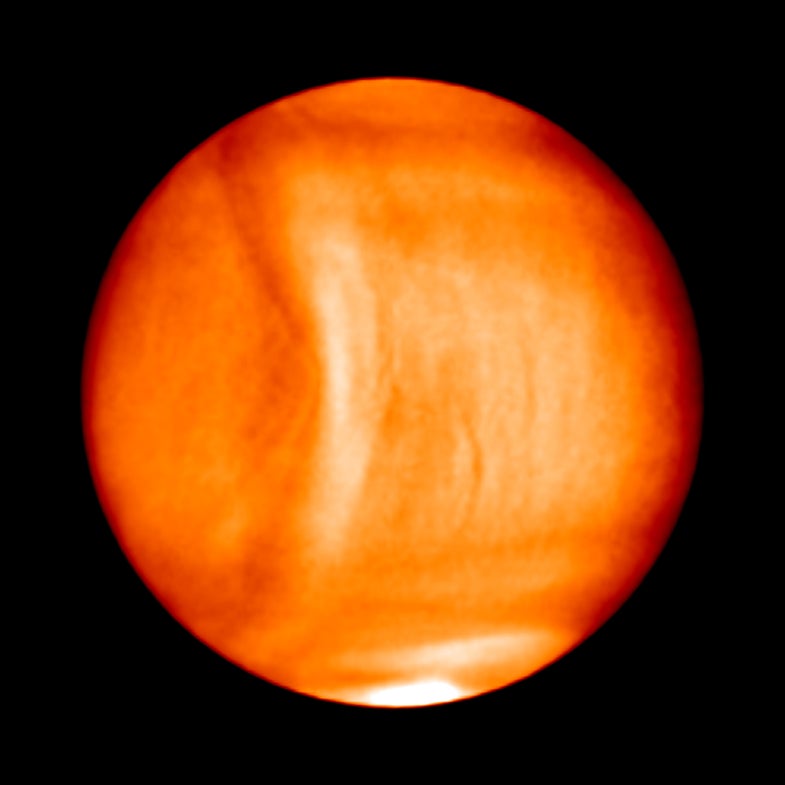 A temperature map of Venus reveals a curved region, shaped like a sideways smile, at a hotter temperature than its surroundings. ©Planet-C
SHARE

If you’ve been complaining about windy weather this winter, don’t even think about vacationing on Venus. Thick clouds of sulfuric acid zip through our sister planet’s atmosphere at more than 220 miles per hour. (For comparison: the highest hurricane wind speed ever recorded in the United States was about 190 miles per hour.) This background wind should sweep away all smaller features on the Venusian cloud tops, and yet planet-spanning atmospheric features manage to stand out. Most recently, Japanese scientists spotted an enormous smile-shaped structure that persisted for days.

This week, researchers from Japan Aerospace Exploration Agency (JAXA) published infrared and ultraviolet images of Venus, taken by their Akatsuki orbiter between December 7 and 11, 2015, in Nature Geoscience. Akatsuki’s pictures reveal a curved region roughly 6000 miles long (Venus’ entire diameter is just around 7,500 miles) with a higher temperature than the surrounding atmosphere. How did the curved “smile” fight those high winds to remain in place for all four days of observation?

The answer may lie in a phenomenon very familiar to Earthlings. Gravity waves, not to be confused with gravitational waves, form when gravity pushes and pulls at the seam between two different materials. Waves on the ocean are perhaps the most obvious example—they exist where the sea meets the sky. But gravity waves also show up in the air, where wind flows over mountains to form waves that undulate upward through different layers of the atmosphere.

The JAXA team thinks that the latter phenomenon may be responsible for that Venusian smile. The researchers ran simulations that suggest an enormous mountain gravity wave could have persisted as long as the smile did. However, their hypothesis suggests that the atmosphere of Venus does not behave as predictably as scientists had assumed. “We suggest that winds in the deep atmosphere may be spatially or temporally more variable than previously thought,” the researchers wrote in the paper.

Whether or not we can point to gravity waves as the culprit, these images have created more mysteries than they have solved. How exactly did that mountain wave form? Why hasn’t it reappeared since 2015? And beyond this particular paper, how does a slow-spinning planet like Venus, where one day lasts as long as 116 Earth days, whip up such frenzied wind speeds? Unfortunately, with NASA focusing on asteroid missions rather than Venusian ones, we might be waiting for those answers for a very long time.