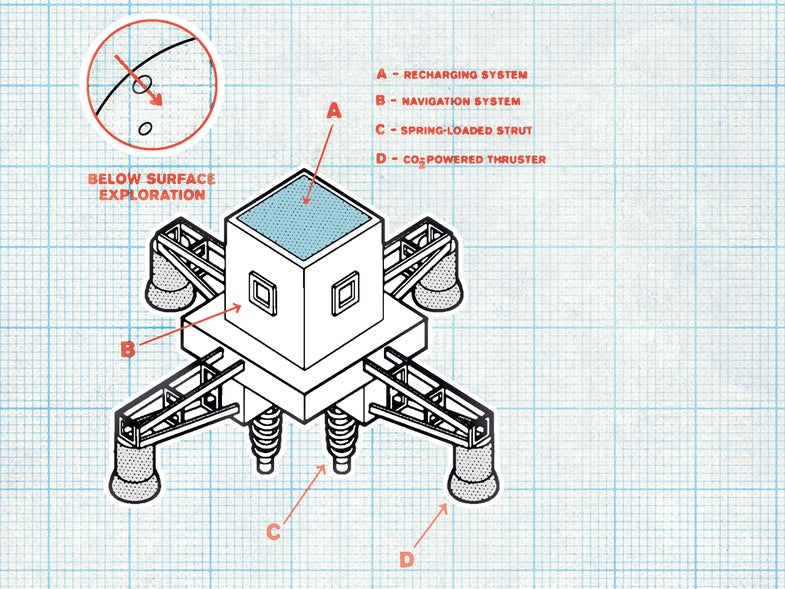 In October, NASA released its plan for getting to Mars. The trip is a long way off (we’re talking decades), but the agency says it’s gearing up: “Like the Apollo Program, we embark on this journey for all humanity. Unlike Apollo, we will be going to stay.”

Easier said than done. Aside from the unbreathable atmosphere and wonky gravity, the radiation on Mars could cause brain damage, cancer, and death.

Our best bet for survival may be to hunker down in the protection of lava tubes—networks of tunnels created billions of years ago by molten rock. We can’t send rovers in for recon though. The pits can be 100 meters deep, and the thick walls (and lag time) make real-time radio communication impossible.

Carnegie Mellon University, along with a spinoff called Astrobotic Technology, has set its sights on a more effective scout: an autonomous drone. The team recently won a $125,000 contract from NASA to develop the software. Eventually, they plan to build a robot that can fly and hop through steep passages.

“Safe haven is a huge priority, right from the beginning,” says William “Red” Whittaker, founder and chief science officer of Astrobotic. “And out of that diversity of caves, there are likely to be underground spaces that are incredibly amenable to habitation.”

Programming a robot to fly itself through unexplored caverns is daunting enough, but Astrobotic’s navigation and perception algorithms need it to “think” at 20 mph. That requires the drone to have a largely unprecedented degree of decision-making without any human input.

The Martian atmosphere is 100 times thinner than Earth’s, making rotors ineffective. Researchers are instead exploring CO2-powered thrusters, which would enable a drone to make the sharp turns necessary in unmapped tunnels.

When the vehicle’s thrusters run out of pressurized CO2, it could land and use an onboard isotope generator (or solar panels if it’s outside the caves) to power a compressor that pulls fuel from the atmosphere.

The drone could catapult through Mars’ low gravity (about 38 percent of Earth’s) using a spring-loaded strut. Hopping would allow it to cover terrain too rough for wheels or treads, without consuming as much fuel as flight.

Astrobotic plans to have rovers that act as rolling motherships for planetary drones—storing them during long treks, launching them at the mouth of promising caves, and transmitting the data they collect back to NASA.

This article was originally published in the December 2015 issue of Popular Science, under the title, “Drones To Scope Out Martian Real Estate.”