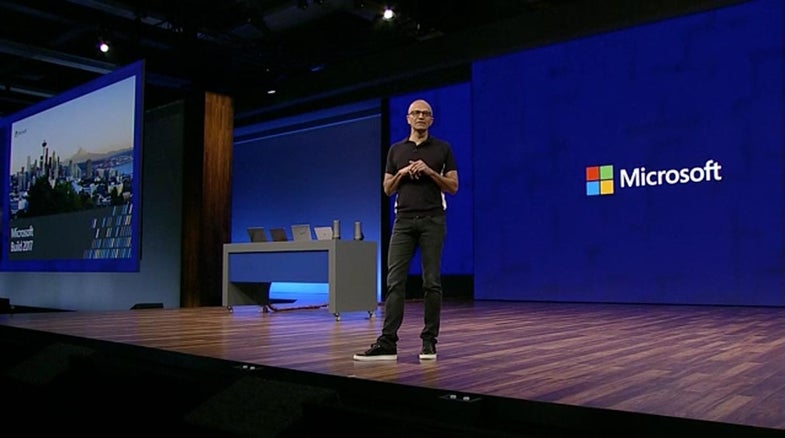 This week’s Microsoft Build conference was aimed pretty squarely at the development community, but as always, there were some interesting bits in there for other people who don’t live and breathe the code. Here’s a short list of the things you may have missed if you’re not embedded in Microsoft’s community of developers (developers, developers, developers…)

The half-billion devices running Windows 10 worldwide can expect a big update in September. It’s not a total overhaul, but it does seem to indicate a strategy shift toward include a tighter integration with mobile devices.

The new Timeline and Pick Up Where You Left Off features, for example, are designed to make for consistent and uninterrupted content and app experiences across devices. (Cortana will be tasked with keeping iOS and Android devices in sync with Windows 10.) So, if you’re working on a project or watching video at home, you can easily pick the process back up on your mobile device when you have to leave.

The Clipboard is also now moving to the cloud, so you can copy something from a PC, and paste it into an app. Sadly, and despite the name, this announcement had nothing to do with Clippy, the decommissioned anthropomorphized paper clip mascot who desperately wanted to help you format your resume in Microsoft Word.

Microsoft hasn’t had a worthy competitor for Apple’s iMovie video-editing software since the demise of Movie Maker, but Story Remix will soon take its place. It will work across platforms via Android, iOS, and of course, Windows apps, so videos and photos from each device can be pulled into an edit. AI will give users a head start on edits by auto-selecting clips and sequences, but those picks can be overridden using the simple interface.

One big differentiator, however, is the tight 3D object integration the software offers. In its quest for “mixed reality” market saturation, Microsoft allows for cross talk from its Remix 3D and Paint 3D apps, which allows created objects to show up in the Story Remix projects. The demo, for instance, showed a group of kids making a movie that included a rendered dinosaur.

We have known about Acer’s upcoming $399 virtual reality headset for a while. It’s set apart from its competition because it has built-in motion sensors, so it doesn’t need external cameras to track its relative position in a room. Now, Microsoft has announced a new set of VR controllers to accompany the Mixed Reality headsets coming by the end of this year.

It’s a somewhat familiar ring-on-a-stick design with LEDs to facilitate tracking and thumb sticks and buttons for controls.

As usual, Microsoft showed off some more fleshed out implementations of its development technology. One such demo was called Project Emma, a wrist-worn device designed to fight the tremors typically associated with Parkinson’s disease. The technology was designed by Haiyan Zhang, the innovation director at Microsoft Research. You can watch the video above to see how the electrical motors help the condition. It’s undeniably heart warming.

Going forward, Microsoft wants the apps and experiences happening inside its ecosystem to have a more-sophisticated design sense. The new Fluent Design System—basically a set of visual and experiential elements that will be consistent across platforms—is what will get them there. The website and the language are all very clearly aimed toward designers, outlining five “building blocks” or key considerations for the system: light, depth, motion, material, and scale.

If you’re a designer or just a design nerd, this is a significant element in Microsoft’s path forward. If you’re an average user, you will probably just notice that apps are starting to look a little fancier and more-consistent across devices during the move away from the previous Metro design language.

One of the most-interesting demos of the entire conference revolved around a workplace in which Microsoft’s AI-driven object recognition software kept close tabs on tools and employees. The objective was to show total integration of artificial intelligence from object and facial recognition to automatic messaging. The results are impressive, if a little startling. For instance, the camera was able to recognize that a jackhammer was improperly leaned against a work bench, giving it the potential to smash someone’s foot. Spotting the unsafe orientation, the system was able to send a notification to a qualified worker on-site to remedy the situation.

Similarly, the system uses facial recognition to spot when workers are performing tasks or using tools for which they’re not qualified or licensed. Of course, there’s an undeniable creep factor to constant, robotic monitoring, but that has to be weighed against the possible benefits like increased safety and compliance.

Mostly quiet on the hardware front

We weren’t really expecting much in terms of new hardware at Build 2017, so we weren’t surprised to see nothing new. Then again, Redmond has trotted out some new gear of late. The company recently announced its first Alexa-based smart hub speaker made by Harman Kardon, and the upcoming Surface Laptop is still fresh in everyone’s mind.