Drones, AI, and smart meetings at the beginning of the Microsoft Build conference

What you need to know about the company's developers' event. 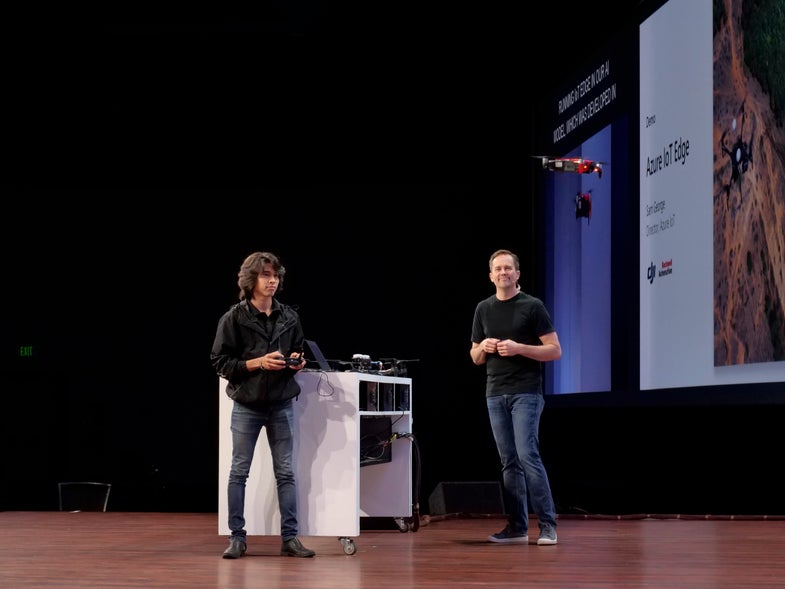 Microsoft kicked off its annual conference for developers, called Build, on Monday. “The world is becoming a computer,” Satya Nadella, the company’s CEO, said towards the beginning of his keynote address, describing the way that computing power is starting to be found everywhere, from cars to drones to homes. That pretty unsurprising idea, plus heavy doses of talk about artificial intelligence, AI and accessibility, mixed reality, chatbots, the cloud, and the “edge”—the computers and phones you actually interact with—defined the first hours of the event.

We got to see Alexa and Cortana hanging out

We live in a world of talking digital helpers, from Siri, to the Google Assistant, to Amazon Alexa, and Microsoft’s version, Cortana. While Amazon and Microsoft announced back in August of last year that the two companies would be collaborating to make their two virtual assistants work together, today we saw a version of that in action.

If you’re imagining Alexa and Cortana freely talking to each other like two robotic hosts in Westworld, you are out of luck. However, what they showed was still interesting.

Meghan Saunders, general manager for Cortana at Microsoft, and Tom Taylor, a senior vice president for Alexa at Amazon, joined each other on stage for a demonstration. Speaking into an Echo, Saunders added an item to her shopping list through Alexa, then asked Alexa to open Cortana. From there, Cortana spoke to Saunders through the Echo, read her schedule out loud, then helped her send an email to Taylor.

Taylor then started speaking with Cortana from a computer, then asked it to open Alexa. Alexa spoke to him through the computer, then called him an Uber to a restaurant called Harvest Vine.

The system, still in beta, feels a little bit silly—asking one virtual assistant to let you speak with another seems less efficient than just only speaking to one of them—but still, it’s nice to see the robots getting along and it’s conceivable that this be helpful for some people in specific situations.

You can sign up here to be notified with more info on this collaboration.

Microsoft is working with drone-making giant DJI, and showcased the intersection of artificial intelligence and unmanned aerial vehicles on stage. In a demonstration, a DJI Mavic Air drone flew around and live-streamed a video feed of industrial-looking pipes onstage that had a simulated problem with them; a laptop receiving the livestream used AI on it to inspect the video in real time and identify an anomaly, shown with a yellow box around it on screen.

It’s easy to see how this kind of feature would be helpful for industries with tons of equipment to inspect—a human flies a drone, and instead of people eyeballing everything, the AI looks for problems and highlights them. And since the AI analysis is happening right on the laptop (it can also run directly onboard a bigger, fancier drone call the DJI M200), the company’s data doesn’t have to go up to a cloud for analysis.

At another moment, Microsoft’s Raanah Amjadi showed a concept of how a prototype device could help out during a meeting. They simulated a meeting about “smart buildings” right on stage that felt very futuristic and incredibly canned.

But the pyramid-like prototype device on the table, equipped with the ability to both listen and see the meeting, did cool stuff. For one thing, it was able to visually identify—and then greet outloud—the people who physically walked into the meeting, saying “Hello Dave,” when someone named Dave Brown entered.

On a screen in the meeting room, the system recognized who was talking and took down a transcript in real time of what everyone said. In a column next to the transcript, the AI also made a note of follow-up items that appeared to be automatically generated when someone said the phrase “follow up” in a sentence. The set-up can also give a remote worker a live translation into a different language.

So if you’re excited for a future where there’s automatically a record of every silly thing you say in a meeting and the follow-up items are instantly written down, Microsoft could someday make you happy.