You Built What?!: A Fire-Breathing, Jet-Powered Dragon 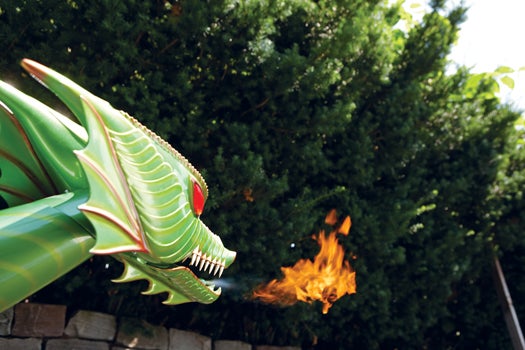 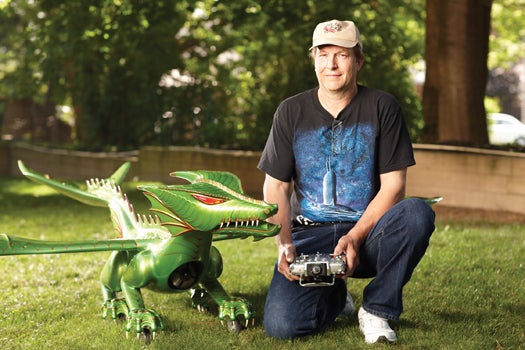 The dragon can fly faster than 100mph, but builder Richard Hamel keeps it at a cruising speed closer to 70.

Richard Hamel was watching the 2010 animated film How to Train Your Dragon with his grandchildren when he noticed something odd about the tails of the flying beasts. Hamel, a longtime radio-control plane builder, realized that those appendages resembled an unconventional aircraft design feature known as an inverted V-tail. In lieu of a vertical stabilizer and horizontal rudder, some aircraft rely on two fins arranged in a V shape. “I thought, ‘That would actually work,'” he recalls, “and I started wondering if I could make a dragon fly.”

Hamel, a Pittsburgh-area plumbing, heating and air-conditioning contractor, has built all types of R/C aircraft but says he prefers working with jet turbines because of their reliability and the sound they make. He bought a JetCat P80 turbine with 22 pounds of thrust and then designed the creature from the inside out. He estimated that a 2.25-liter fuel tank would be enough for a few good flights and added up the weight of the other components he knew he would need—electronics, batteries and custom exhaust pipe.

Once he had determined that the weight would be about 33 pounds, Hamel was able to figure out that he would need 9-foot-wide wings. He used an off-the-shelf airfoil design template for the wings and built a fiberglass prototype that reached over 100 mph in a test flight. But that was too fast—he wanted people to see it when it banked—so he chose a new wing design that slowed it down a bit. The test flight also revealed that the dragon turned too slowly. Hamel had heard that flying dinosaurs used their heads to turn, so he designed a new skull. Now when the dragon’s V-tail rudder initiates a turn, its head swings around as well. 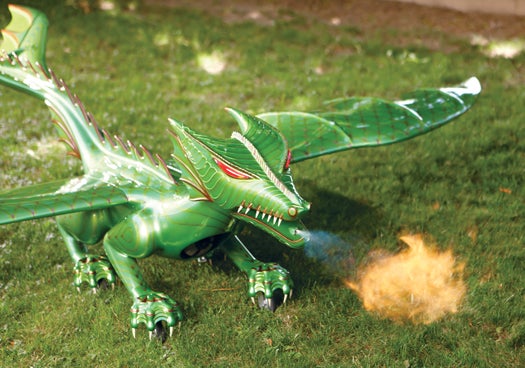 For safety reasons, Hamel activates the dragon’s flame breath only in quick bursts.

Hamel wanted his dragon to be fearsome too. He spent several months designing and laying on the scales, molding the teeth out of urethane, and designing eyes backlit with red LEDs. Of course, without fire a dragon is just a flying lizard, so he added the circuit from a 50,000-volt stun gun he found in his basement at the edge of the beast’s jaw, set a nozzle into the back of its mouth, and hooked that to a canister of liquid propane. When the nozzle sprays the propane through the activated circuit, a three-foot blast of red and blue flames shoots out.

Hamel plans to fly the dragon at air shows and parks, and although he designed it to be intimidating, he’s also concerned for its safety. “I’m worried somebody is going to take a shot at it.” 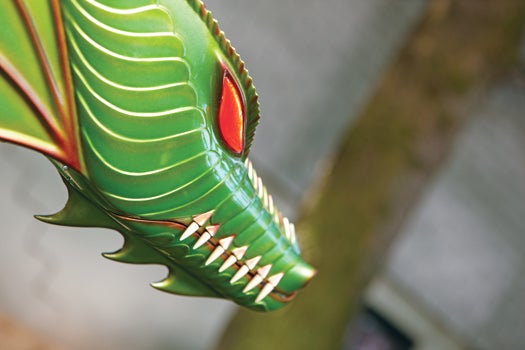 See how Hamel’s dragon works (and see it in action) on the next page.

The jet turbine inhales air through an inlet in the dragon’s chest and thrusts it out the rear at 500 mph. The air coming out of the turbine can exceed 1,400 degrees. To avoid cooking the other components, Hamel designed and custom-welded a double-walled stainless-steel exhaust for insulation. 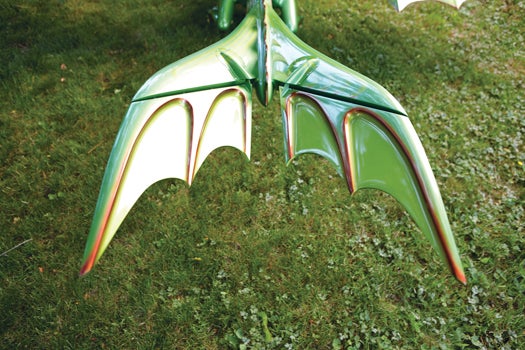 Hamel opted for an off-the-shelf 2.4-gigahertz touchscreen radio controller. Four nickel-cadmium battery packs power the receiver, the servomotors that turn the head and tail, the red LED eyes and stun-gun circuit, and the microprocessor that controls the turbine. 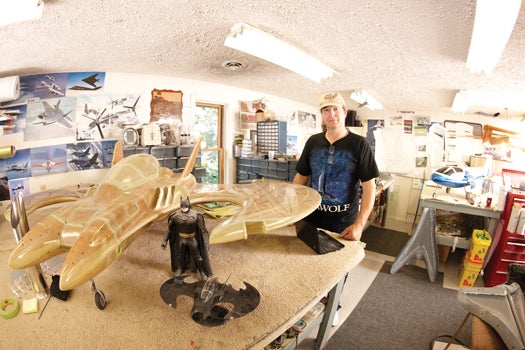 Hamel says he spent about 100 hours airbrushing the creature’s exterior.

After carving the head out of foam, Hamel molded two extra copies from which he could cut scales to apply to the dragon’s exterior. To create the creature’s devilish gaze, he cast the eyes out of clear urethane resin and set a bank of red LEDs behind them. 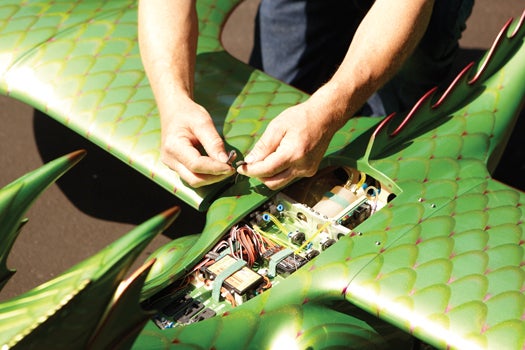 Hamel activates the fire breath by flipping a switch on his remote. He wired the receiver to the dragon’s eyes and a servomotor in its head. When he activates the LED eyes, they light up, telling him the fire system is ready. Then he flips another switch that turns on the servomotor to open the mouth. That sets off the stun-gun circuit and opens the propane valve. (His plumbing background came in handy—he built the valve himself.) The gas squirts out and, for a few seconds, the dragon spews flames.

See how Hamel’s dragon looks when it’s fired up.