You Built What?! A Backyard B-50 Bomber 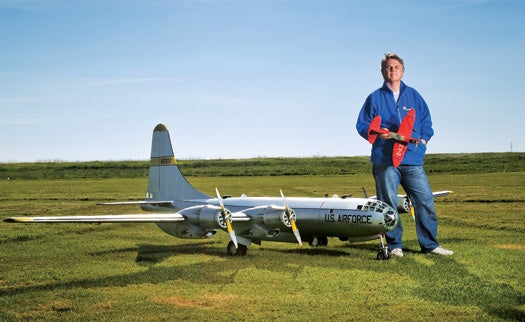 Four years ago, engineer Tony Nijhuis was visiting an aviation museum in Duxford, England, when he spotted his next project: the iconic World War II–era Boeing B-29 Superfortress. Nijhuis has been building electric models since he was a boy, but he had been thinking about doing something bigger. Much bigger. The result is a replica that— with a 20-foot wingspan, period decals, and loudspeakers that blare sounds of the real engine—boasts nearly everything but the bombs.

Nijhuis decided to go with a variant of the B-29, the B-50, because of its aerodynamic design and because it was more novel. The real bomber had four engines, so he hunted down four of the biggest electric motors he could find. He created 2-D sketches of the body, wings and tail using AutoCAD and commissioned a laser-cutting company to handle the more than 300 custom segments he needed.

To make the plastic nose and gun canopies, Nijhuis first had to hand-carve wooden molds of each one. For the retractable landing gear, he hooked an off-the-shelf pneumatic system up to pressurized air tanks made from plastic Coke bottles. He also skinned the balsa-wood-ribbed fuselage with laminate wood composite and fiberglass.

Aside from some shredded tires, test flights have been a success. Nijhuis believes that it’s the largest and heaviest electric flying model in the world, and thanks to the added sound effects, he says, “it is certainly one of
the loudest.” 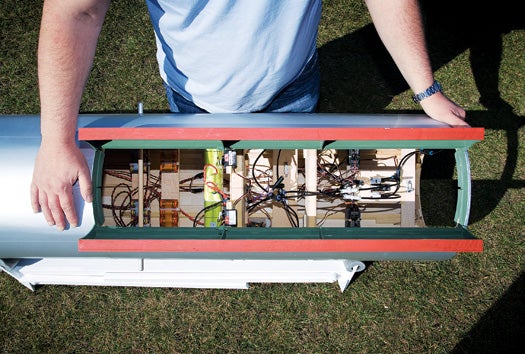 POWER
Nijhuis estimated that the model would weigh 95 pounds. A rough calculation determined that he would need 40 watts of power per pound to take off, so he figured four 3.5-kilowatt electric motors would do the trick. He designed a balsa-wood-and-plywood-based nacelle, or housing, for each of the motors, the nickel-hydride batteries, and the speed controllers that would crank them up or wind them down. Each nacelle is totally independent of the others, so if one fails, the others aren’t compromised, and Nijhuis can still land his baby safely. 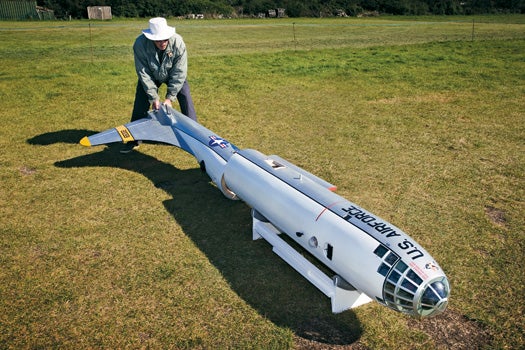 The bolts had to be repositioned so that the skin around the fuselage wouldn’t crack when the plane’s parts were snapped together during assembly. For more details, go to tonynijhuisdesigns.co.uk.

PORTABILITY
Nijhuis designed the structure to separate into eight pieces. The wings and tail fins are secured by aluminum and carbon-fiber rods, respectively, and the fuselage bolts together. He moved the bolts in line with the longerons—the parts that act as a structural spine, running perpendicular to the ribs—so it would connect properly.

SOUND
The builder wanted the craft to sound authentic, too. So he had a sound designer find a recording of a plane with the same engines as the B-50, and add the sound files to a memory chip. He installed four speakers on the underside of the wings, added amps, and hooked them all up to the speed controllers. The speakers blare the sounds loudest when the motors are working their hardest. Instead of an electric whir, it sounds like the real thing.