You Built What?!: An Electric-Assist Chopper-Style Bicycle 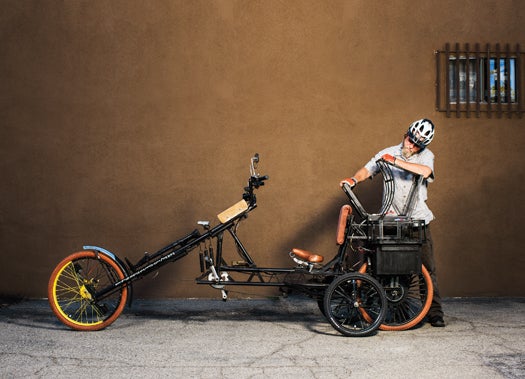 Cat Woodmansee didn’t want to commute by car or train, but the 50-year-old Silicon Valley software engineer wasn’t up to pedaling his bicycle 60 miles a day either. So, using a kit, he added an electric-assist motor and battery pack to his Electra Cruiser 7D, a standard bike.

A few rides with too-heavy loads over pothole-laden roads ruined it, though, so Woodmansee decided to take some of the kit parts and build a whole new machine. Over two years later, he’s got a 180-pound, 8.5-foot-long Frankencycle that can go 60 miles on a charge and easily cruise over curbs. 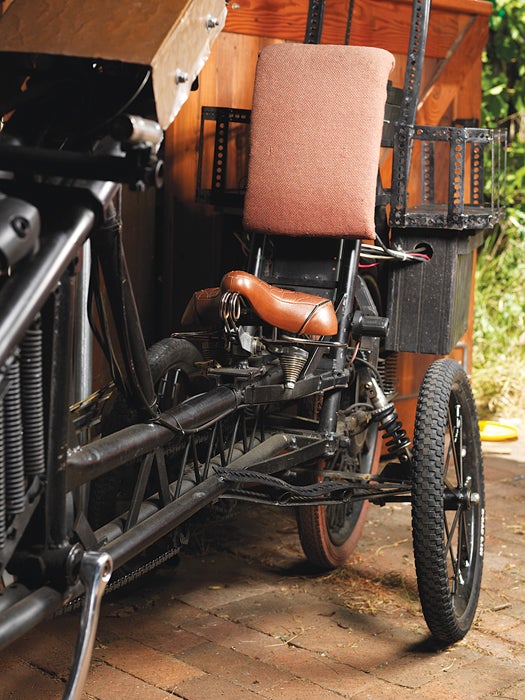 Woodmansee—who says he changed his name from Brad to Cat to stay in better touch with his inner animal being—conceived the new bike while reclining in a lawn chair in his garage shop. The ergonomics suited him, so he opted for a chopper-style recumbent design with the front wheel far ahead of the seat. Because the combined weight of the kit’s powerful electric motor, the lithium-iron-phosphate battery and the rider himself was too great for the Electra Cruiser’s frame and rear wheel, he built both of those parts from scratch. Using steel bolts and 0.5-inch-wide iron bars, he welded nearly indestructible spokes for the wheel. 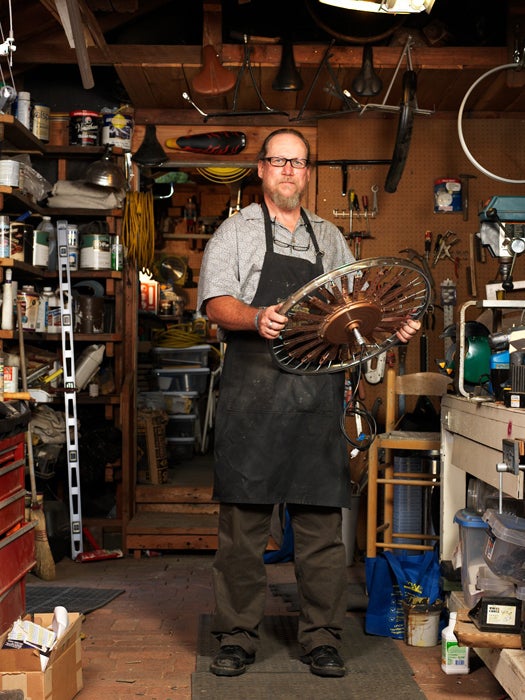 Woodmansee says he named the bike the Blackbird, after the 1960s stealth aircraft, because it’s similarly ahead of its time.

Woodmansee also welded an iron truss for the frame, then ripped the steering column out of an old bike and combined it with two massive iron forks to add length and strength. To help the bike absorb shocks from bumpy roads, he added a pair of steel springs hooked to the front wheel. Because the back wheel would bear most of the weight, however, he figured that it would need additional suspension. He linked that wheel to the frame via a trailing arm with eight steel springs. If he wants to soften the ride, he can remove a few of the springs. “It feels like an old Pontiac,” he says. “As you go down the road, you just float up and down.” 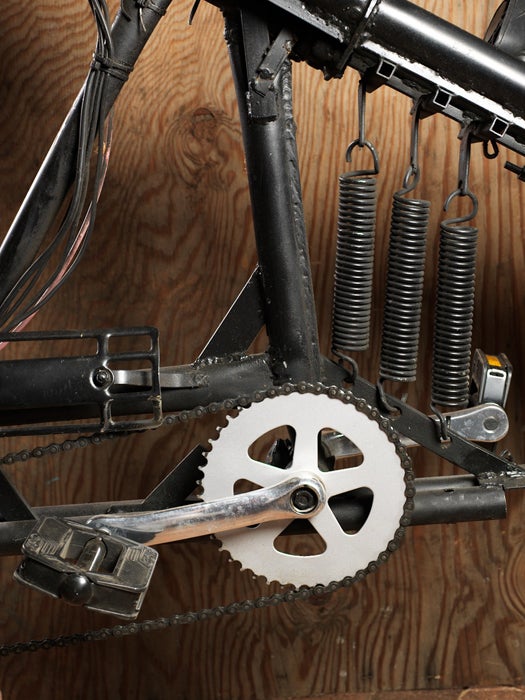 Other parts of the chopper, which he named the Blackbird, required even more tinkering. The steering column had been made for a bicycle about a quarter the size. “Essentially, it just destroyed itself,” he says. In fact, he thought the bike was unsalvageable until he saw an old jogging stroller at a thrift store. The wide-set wheels, he figured, would be perfect as outriggers to absorb some of the weight when he turns and would take the stress off the steering column. He was partially right: The bike busted the stroller’s axle, but he built a new one with reinforced wheels, and it worked perfectly. The handling isn’t quite as smooth as it had been, but Woodmansee isn’t complaining. He can ride the Blackbird 25 miles on a charge without pedaling. (The engine does less work when he does pedal, giving an active rider 60 miles per charge.) He has now been commuting on his bike for five months, pedaling along at an easy 15 miles per hour.

(See more awesome bike projects on the next page)

Brad Graham, the Ontario-based leader of online DIY bike community Atomic Zombie and a former record holder for making the world’s tallest bicycle, may create more strange rides than any other amateur builder. Here are two of his latest. 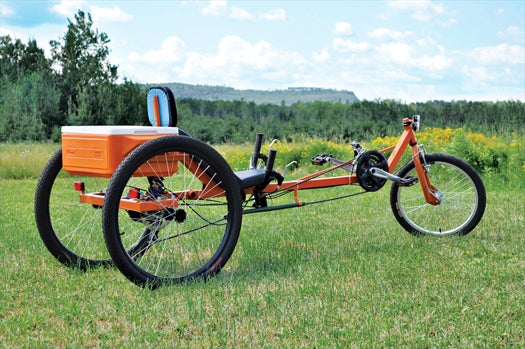 After moving to a rural area this year, Graham built a bike that could handle large hills and gravel roads. Using scrap parts, he designed a trike with two rear wheels to bear the weight of a cargo box in back. A suspension system below the container smooths the ride on rough roads. He set the seat high to ensure good visibility, but low enough that he can push the backrest hard against the cargo box when he’s jamming up a hill. 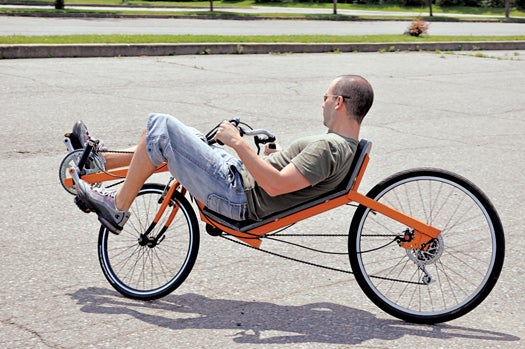 Graham designed the recumbent Tomahawk purely for speed. He angled the seat back to make bike and rider more aerodynamic. By shortening the wheelbase and situating the rider between the wheels with the pedals out front, he improved the distribution of weight on the frame. To make the bike adjustable to riders of different heights, he built a sliding bracket that extends or shortens the steel boom that holds the cranks.