You Built What?! A Colossal Flying Reproduction of a 1935 Airship

The model USS Macon barely fits inside a two-car garage 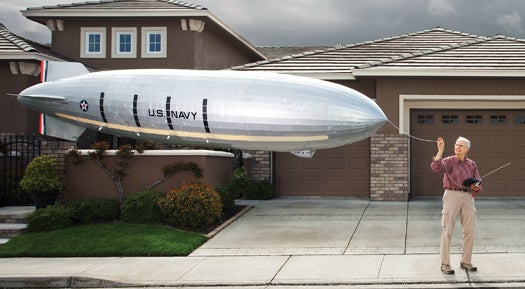 The airship gets 45 minutes of flight time on a single charge of its battery. Cody Pickens
SHARE

The first time retired computer engineer Jack Clemens tried to build a scale model of the USS Macon, a helium-filled naval airship lost in bad weather in 1935, his cat jumped on the prototype from a high shelf and ruined the hull. Clemens finished a second version in 2008 but totaled it during an unexpectedly windy test flight. Finally, in April, Clemens completed version number 3, a 20-foot-long radio-controlled replica accurate down to practically every detail, from the airbag to the propellers.

Click here to see how the giant model works.

Clemens frequently used to commute past the Macon’s enormous hangar in Moffett Field, California. He thought returning a model of the craft to its original home would be a fitting tribute, so he requested the plans from the Smithsonian National Air and Space Museum.

The Macon was an airship, not a blimp, meaning it had a rigid hull. A backbone made from 12 circular frames connected with strips of wood called longerons gave the 785-foot-long craft its form. Clemens wanted to mimic the structure in his model, so he built a jig to ensure that the frames–made from thousands of balsa-wood sticks–were precisely the right size. Although the Macon’s skin was a mix of cotton muslin and metal-colored sealant, Clemens’s model used Mylar because it was lightweight, tough and the right color.

Clemens calculated that to get his craft to fly, he would need a total of eight small model-airplane propellers anchored to the sides of the frame. “It takes very little propulsive force to move an airship,” he explains. The propellers are powered by a single 2.5-ounce lithium-polymer battery that sits in the nose of the craft and helps balance the weight of pulleys and servomotors in the tail.

Currently the 20-foot-long, 3.3-foot-diameter airship resides in Clemens’s garage (“It’s the bane of my wife’s existence,” he says), but he has offered to donate it to a new museum being built in Moffett Field. He’s hoping that one day he’ll even get the chance to fly it in the Macon’s original hangar, far away from strong winds and leaping cats. 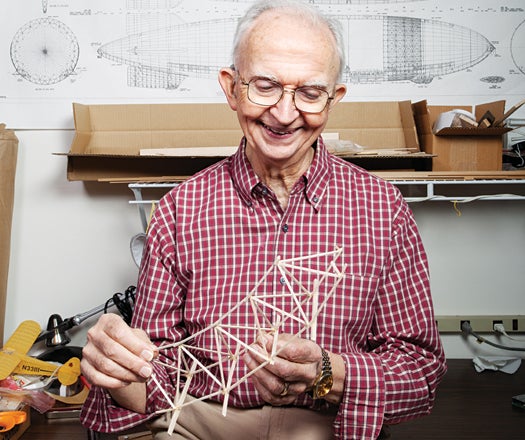 When Clemens did the math, he realized that a working model airship of this type would have to be huge. He would need lots of helium–at least 150 cubic feet worth–to carry the weight of the internal wooden frame. That meant lots of interior space. By his calculations, the model would have to be at least 20 feet long. Anything smaller, and the weight of the frame would negate the lift of the gas. But he also couldn’t go any larger; a 20-foot-long airship would just fit, on a diagonal, inside his two-car garage. 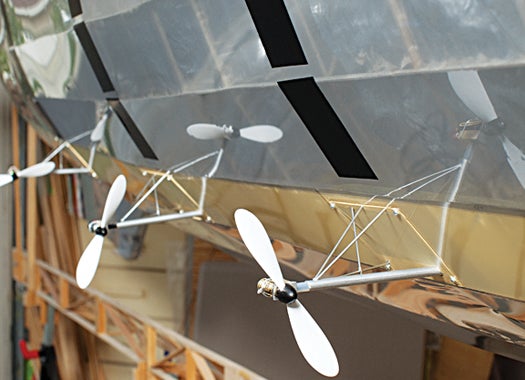 Clemens copied the Macon’s exterior look, the number of motors and helium bladders, the internal frame, and more. But there were a few necessary deviations. He tried to find a way to house the propellers’ motors inside the airship, as in the original, but the extra connective parts would have added too much weight. Ultimately he placed each motor on the exterior by the propeller it controls. And because the interior cabin didn’t affect the flight characteristics, he didn’t try to replicate its original details. 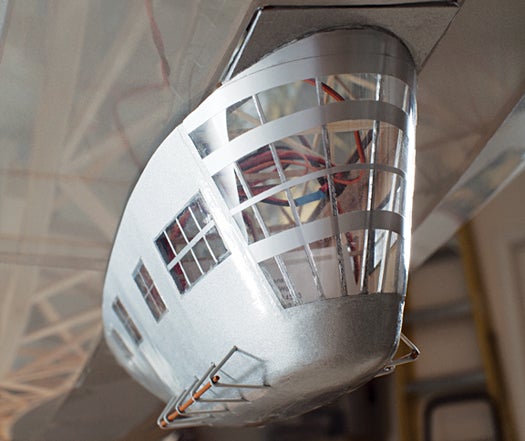 Clemens used a standard R/C controller, which sends commands to a radio receiver installed in the airship’s control cockpit. The receiver is wired to each of the eight propeller motors. He can adjust the forward thrust of three motors on each side, and he can rotate the fourth to provide upward or downward thrust. To steer, the controller sends signals to a cable-and-pulley system in the airship’s tail that adjusts the rear fins to turn, ascend, and descend. The model airship can’t reach the original’s maximum speed of 80 mph, but it does cruise along comfortably at up to 15 mph. 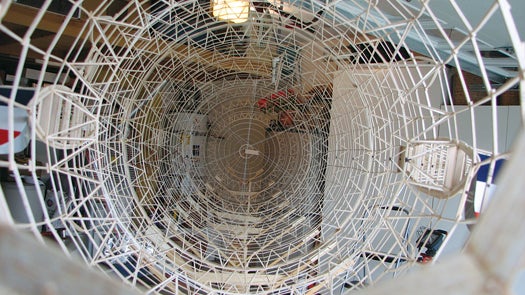