You Built What!? A Closer Look at The Jet-Powered ATV 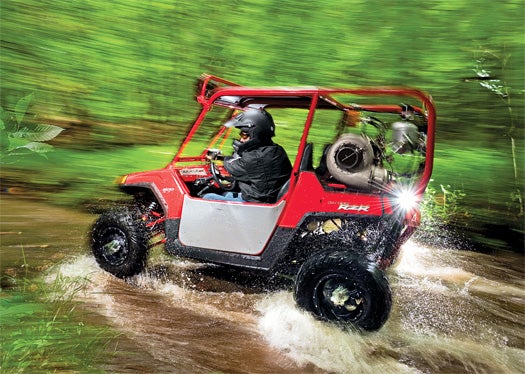 When John Carnett—Popular Science staff photographer, inventor and tinkerer-about-town—began confiding in people about plans for his latest project, he found few allies. Not surprisingly, almost no one wanted any part of his scheme to stuff a jet-turbine engine in a Polaris RZR all-terrain vehicle. But Carnett, who grew up near an airfield, remained undeterred.

His early attempts to procure a jet by calling manufacturers proved futile. When he told them of his idea to put the engine in a land-based vehicle, they inevitably hung up. He did find a few turbines for sale on eBay but decided that probably wasn’t the safest bet. Finally he turned to the gray market of turbine hobbyists, ultimately deciding that a gas turbine was most appropriate and secured a Garrett GTP 30-67 model, along with some other parts, for $6,000. The 87-pound engine, made back in the 1960s, was used in a power generator for the military.

In all, it took 10 months, more than $15,000 and countless headaches to bring “Project Whirl” to life. And getting the other parts together was a feat in itself. Fortunately, Polaris donated the RZR out of curiosity to see what would become of it in Carnett’s workshop. He got parts such as the roll cage, suspension, wheels, tires and lights gratis too. He also had to spend hours on the phone with anyone he thought could help propel his invention to the next step. “I would go through 20 or 30 days at a time of total failure,” Carnett says, like the time he used the wrong hydraulic fluid, causing the starter motor to blow up. Eventually someone instructed him to use automatic-transmission fluid instead because it’s much thinner and better suited to a jet engine.

Six weeks after an initial test run that took him all of 20 feet from his driveway, Carnett fixed the design and found himself driving five miles around his Philadelphia hometown, half expecting to get arrested. Next he took the Whirl out to the woods to let it roam in its natural habitat. The beast gets seven miles to the gallon on a mixture of three gallons of regular gas to one gallon of diesel, and it roars at a rock-concert noise level of about 114 decibels. Topping out at just over 60 mph, it isn’t much faster than a stock RZR, but the Whirl’s gas turbine reaches maximum power in seconds and stays at that level all the time, so it can get up to its top speed almost instantly even from a dead stop. And the vehicle does some other things a stock model doesn’t: require the driver to don ear protection, have a fire extinguisher at the ready, and wear a flame-resistant Nomex suit. 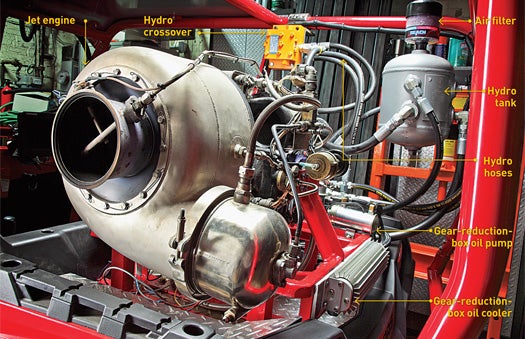 How the Jet-Powered ATV Works 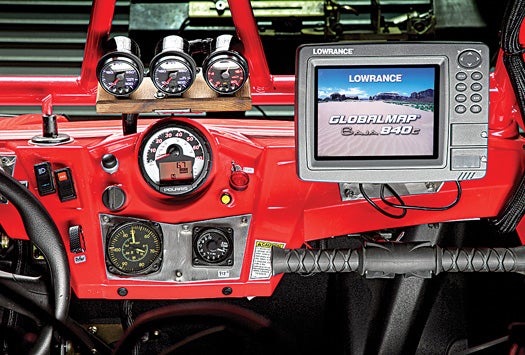 The view from the Whirl’s driver’s seat

To build the Whirl, Carnett replaced the RZR’s original engine with a gas turbine connected to a custom gear-reduction box, which is then connected to a pump that controls a hydraulic motor and the transmission. The turbine runs a consistent 8,000 rpm at an output shaft mated to the gear-reduction box, which drops the rpm output to 3,650 (the speed required by the Eaton piston pump to which it’s connected). The piston pump pressurizes the hydraulic fluid and is attached to the final part of the hydraulic drive, a Sunfab hydraulic motor. From there, a pulley mounted on the motor spins a three-inch-wide Gates transmission belt and a pulley connected to the input shaft of the RZR’s stock gearbox. A control stick installed in a box between the seats runs the Sunfab motor and acts as a hand-controlled accelerator. The turbine requires 24 volts to jolt it into action, so Carnett added two 12-volt batteries under the driver’s seat. All those parts connect to the turbine, mounted in the cargo area of the RZR with a custom frame that ties into the stock frame. 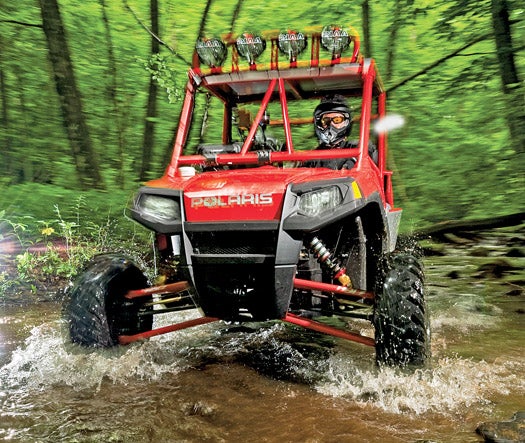 Maintaining 100 percent power all the time, the Whirl can reach its top speed in an instant.

We [previously posted on Carnett’s Jet Quad when it was completed last summer_.