A Robot Buddy for Your Bicycle-Built-For-Two

One rider and one robot to do all the work 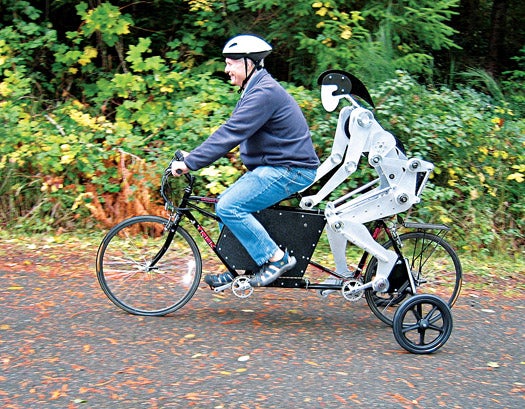 The project began as a challenge. Carl Morgan’s son Justin, recalling how he used to have to crank up a nasty hill outside their Bainbridge Island, Washington, home every day, asked his dad, a retired electrical engineer, if he could build something that would take care of the pedaling for a lazy biker. The “yes” arrived about a year later—an electric-motor-powered tandem bicycle featuring a gleaming robot named Joules.

Morgan spent months modeling how to transform a motor’s spin into pedal-pushing legs. The motor inside Joules’s torso turns a series of linked belts and chains that transfer power from one area of the robot to the next. Each upper leg pivots at the hip, raising and lowering its knee and forcing the lower legs to turn the pedals. He also added “bones” (rods on the outside) for needed stiffness.

Morgan was nervous when he climbed in front for the final test, but Joules easily cruised to the top of the hill. The bike could probably do more, even hit 30 mph, but Morgan says he doesn’t plan to find out: “Abject cowardice on my part means we’ll never know for sure.” 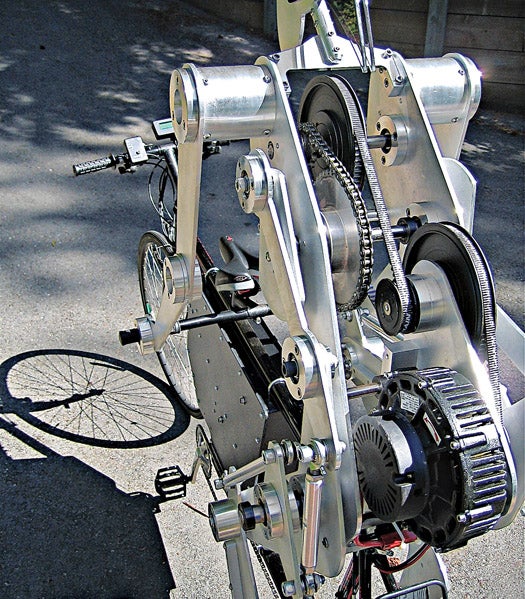 Morgan had to position the knees at the correct angle relative to the pedals to transfer enough force. 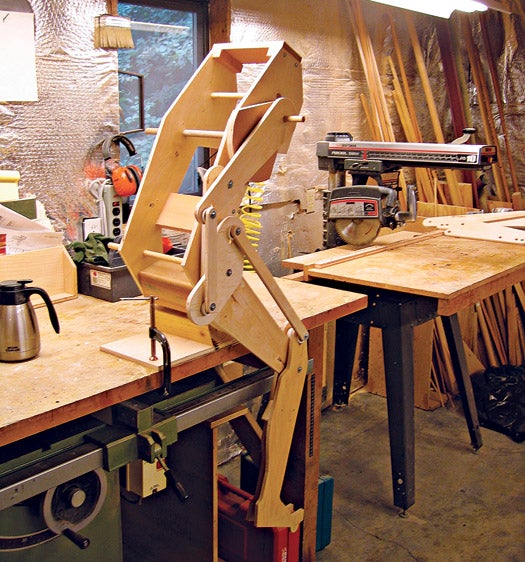 POWERED-DOWN
With its 14-horsepower electric motor, Joules “is so powerful, it could probably climb a tree,” Morgan jokes. In fact, the motor would push too hard had he not added an electronic speed and current controller that limits it to 28 percent of its total horsepower. (It maxes out at 2,400 rpm, which is far too fast for a bike—pro cyclists usually crank at 100 to 110 rpm.) Morgan also managed to slow the rotation of the pedals to a more manageable maximum of 90 rpm, or an estimated top speed of 30 mph, by adding several rotating belts and chains to Joules’s torso. That increased the torque as well, giving the robot enough power to carry the rider up the hill and beyond.

STABLE AND SAFE
Morgan added large custom-made training wheels to the rear of the bike, guaranteeing that Joules won’t topple when Morgan climbs on or off. Wiring the motor to the controls in front was easy for the electrical engineer. He added a key ignition and emergency toggle switch to the left side that cuts the power to the motor, and a motorcycle-style throttle in the right handlebar grip to crank up the speed.

CURB APPEAL
The robot’s sleek aluminum design and racing-helmet-shaped head add eye-catching flash, something Morgan believes is an important part of any project. “It’s cool to make a paper airplane that flies,” he says, “but it’s just as cool to draw dragon wings on it.”

PEDAL-FREE
Morgan trimmed down the tandem bike’s pedals and machined a pair of cylindrical aluminum links between Joules’s feet and the end of the crank arm (the part that’s attached to the pedals). If the angles of rotation of Joules’s legs were off by even a millimeter, the robot would not be able to pedal smoothly, so he added a circle of deformable urethane foam inside the cylinder, creating a little bit of extra leeway. As for Morgan himself, he keeps his feet on the pedals but doesn’t have to do any work. “Why build a helper whose only purpose is to pedal—and then get in the way of his sole means of expression?” he says. “Besides, I put months of effort into this chance for a few minutes of sloth.”