You Built What?! The World’s Largest Videogame Controller

Talk about your Super(sized) Mario Bros.: this controller does away with sore thumbs, but it might sprain a few ankles 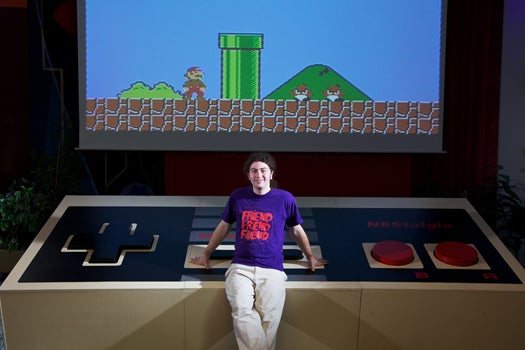 The NES controller is roughly 12 feet by six feet, about two feet high, and weighs an estimated 265 pounds.

One night last february, Ben Allen and a group of electrical-engineering students at Delft University of Technology in the Netherlands needed some help testing their 20-inch-long prototype of the classic 1980s Nintendo Entertainment System (NES) controller. The group was in the early stages of designing an absurdly enlarged version of the device—one as long and wide as a compact car—in an attempt to break the world controller-size record. In honor of the quest, they enticed some fellow geeks to join them at a campus pub by offering free Guinness. The wood-and-PVC prototype had serious design flaws, though, and before long, the testers broke it.

The students had chosen the NES because of its iconic status among gamers and because the Guinness World Records book doesn’t recognize joysticks. The test in the pub confirmed their suspicions that a 12-foot-long controller would need to be sturdier, since some players would be jumping on the buttons to play a game instead of just pressing them. The students started by designing a steel frame and added steel crossbeams and additional supports beneath the buttons. For the body of the controller, Allen and his crew chose a strong, cheap form of compressed wood.

The next challenge was to get the controller to communicate with a standard NES console. In the pub test, the conventional button mechanism didn’t work—the micromechanical switches that relay the signal got bent out of shape from rough use. So Allen and his colleagues designed a light-based system instead. Underneath each of the eight buttons—the four rectangular corners of the directional pad, red A and B buttons, start and select—an infrared LED shines on a photodiode. Metal plates block the light when a button is pressed, so the console can detect that the button has been pressed.

The group built two controllers and demoed them in the town square, giving local kids the chance to kick virtual soccer balls and guide Mario across mushroom tops by jumping from button to button. In September, the group received word from Guinness that its creation will earn a nod in the gamers’ edition of the 2012 record book, but Allen seems happy just to have a comically huge new toy. “It’s such a rush to play,” he says. 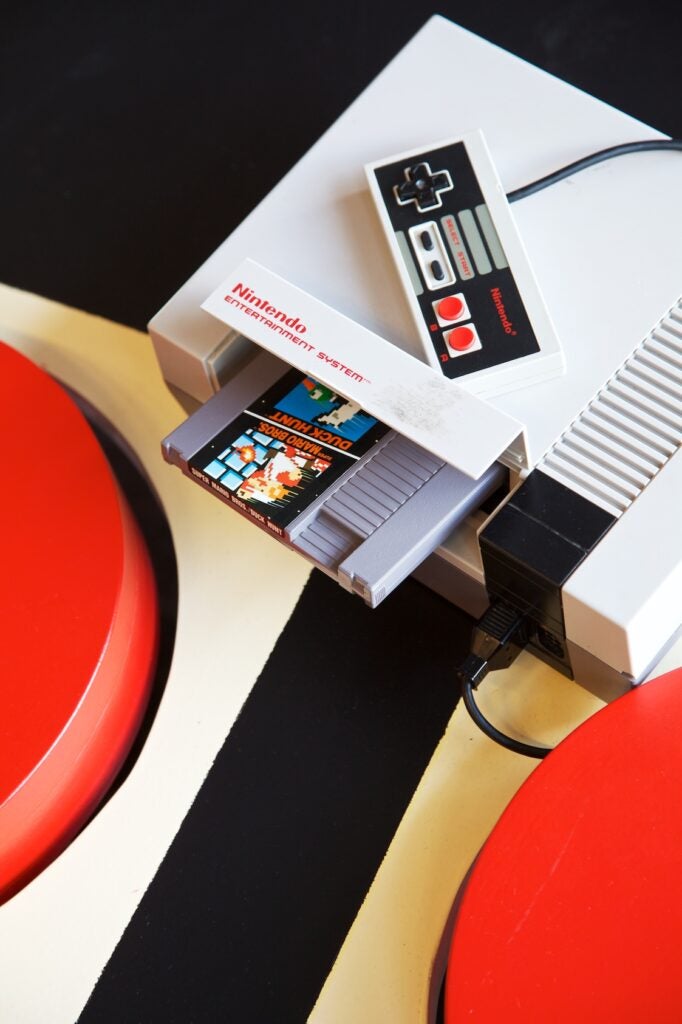 Two or more players at a time use one controller–pressing buttons or jumping on them–which communicates with a standard console.

Electronics: The chip inside the controller has eight inputs, each of which is tied to a specific button. The console asks the buttons’ status 50 times a second and infers whether they’ve been pressed. To provide a response to the console’s queries, the students wired each of the photodiodes in the controller to a circuit board. Until a button is pressed, the LED keeps sending infrared light at the photodiode, and sensors on the circuit board register no voltage. When a player presses a button, the infrared signal is blocked and the sensors detect a rise in voltage. The group engineered the system so that the spike would represent a pressed button to the console.

Setup: Painting the NES was one of the hardest parts of the build. The group had to replicate the original look while also creating something that could withstand stomping. After cutting the composite wood plates, they painted the exterior of each with two base coats, a color coat, and a clear lacquer to seal it all in. Once everything was finished and the students set up the controllers in a public square outside the university, they realized they didn’t have the right cables on hand to connect the game console to the screen. So they borrowed a cable normally used for stage lighting and spliced the correct connectors onto the end.

Gameplay: In most cases, two people operate a single controller, since it is too hard to jump the six feet from the directional arrows to the A and B buttons. The kids at the demo loved the retro-Wii aspect, but Allen admits that the controllers don’t exactly lend themselves to high scores. “They’re big and they’re slow,” he says. In Super Mario Bros., “people die a lot.”