You Built What?!: A Compact Mechanical Crossbow With the Precision of a Laser

Wrist-mounted weaponry brought to you by the letter Y 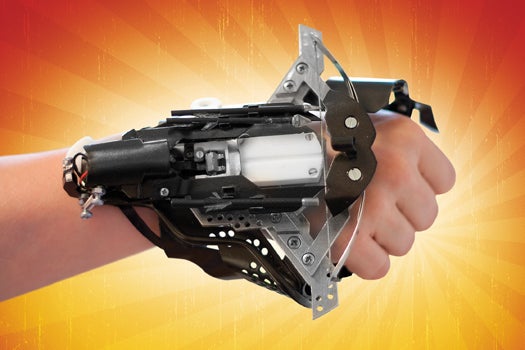 Last October, after hurting his knee playing hockey, Patrick Priebe was holed up in his apartment near Cologne, Germany, with nothing to do. He was sitting at his computer, staring at his keyboard, when the “Y” key caught his eye. Priebe didn’t see a letter. To him, it looked like a crossbow. Immediately he knew what his next project would be.

For years, the German lab technician had built laser weapons, including a working Iron Man–style palm-fired blue-diode laser. After all those futuristic gadgets, he wanted to make a completely mechanical contraption. Priebe doesn’t draw up designs for his projects; he just starts tinkering. In his home shop, he cut some bars from an aluminum sheet and fastened together a Y-shaped frame that fit perfectly over the back of his hand.

Next he gathered more aluminum, copper, and brass sheeting. He ordered steel wire usually used in model planes, carbon-fiber tubing for the arrow shafts, and a few cylinders of low-friction Teflon plastic. He cut out two pieces of flexible spring-steel to act as the bow and stretched the steel wire between them for the string. Using a lathe, he shaped pieces of brass for the arrowheads, glued them to the carbon-fiber tubes, cut a groove down the center of one of the Teflon bars, and placed it in the center of the crossbow. 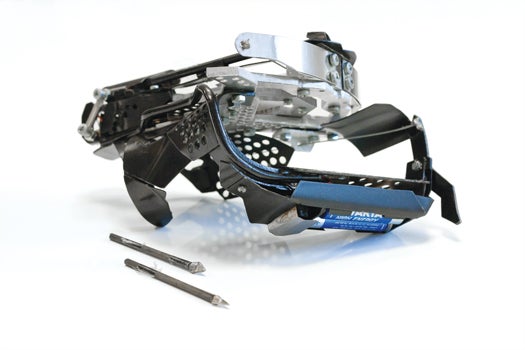 To fire, he pulls back the wire, hooks it around a brass block, and places an arrow in the groove. When he flicks the thumb trigger, the brass block drops, the wire pops forward, and the arrow flies.

Priebe can use the crossbow to pierce soda cans, smash lightbulbs, and tag apples. And although his creation isn’t the smallest crossbow in the DIY world, none match its mix of power and accuracy, quick reload and ability to fire one-handed. Still, he has no plans to use it, not even for home security. For that, he says, “I have a pretty sturdy hockey stick that would do the trick.”

Go on to the next page for three more DIY projectile launchers. 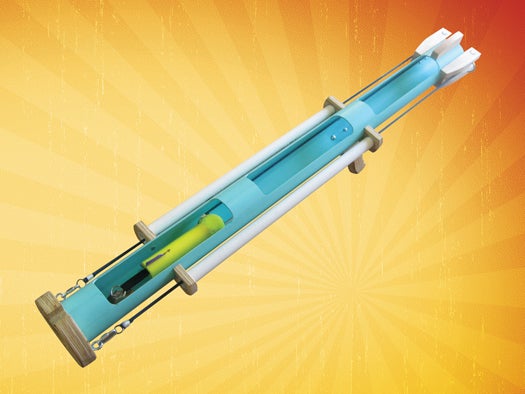 Bungee bazooka: Sam Elder, a recreation coordinator in Richfield City, Utah, used a four-inch-diameter sewer pipe as the body of his slingshot-like shoulder cannon, cut and mounted two narrow lengths of PVC piping to the outside of the barrel, and attached twin pulleys just above them, at the nose. He secured one end of a length of surgical tubing to a carved wooden base and fed it through the PVC, around the pulleys, and into the barrel, and, finally, attached it to hooks at the front end of a foam dart. When he pulls the trigger, a pin holding the back end of the dart releases, projecting the dart out of the barrel. When Elder decided that shooting only foam ammunition wasn’t enough fun, he added a small pouch that allows him to fire tennis balls and raw eggs. 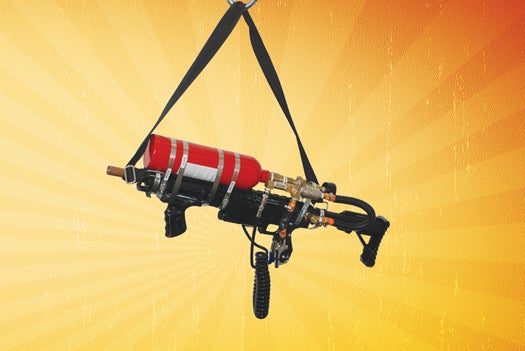 Grappling-Hook Launcher: Tree climbers typically thread their ropes over high branches by tossing beanbags tied to thin lines, but MIT student Christian Reed wanted an easier technique. So he bought a carbon dioxide tank used for paintball guns, emptied a fire extinguisher, and connected the two through a small network of pipes and valves. He cut a piece of copper pipe for the barrel and fit all the components, including a regulator to monitor air pressure, around a plastic Nerf rifle. When he pulls the trigger, compressed air blasts out of the fire extinguisher and down into the copper barrel, ejecting the grappling hook up to branches as high as 70 feet. 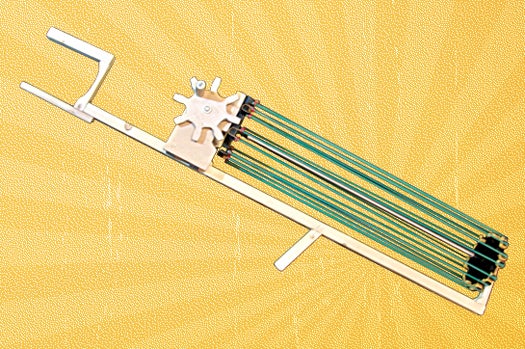 Gatling-gun slingshot: German businessman Jörg Sprave built a pair of wooden wheels, each with eight one-inch-square blocks arrayed around their circumference, joined the wheels with a three-foot-long steel rod so they turn in unison, and cut a frame and shoulder mount out of wood to hold them in place. For the firing mechanism, Sprave cut small pouches from scrap leather, attached them to stretchable bands, and pulled them from the front wheel to the back, making eight miniature slingshots. To load the gun, he slips steel balls between the slingshots and the wood. To fire, he turns the wheels with a crank, shooting the balls out in rapid succession.