You Built What?!: A Tractor For The Apocalypse 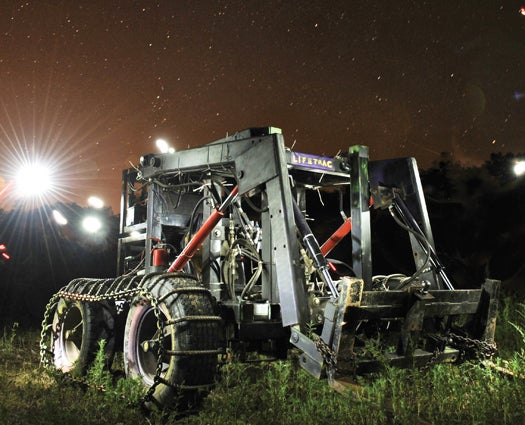 Marcin Jakubowski didn’t study fusion physics to become a farmer. But the Polish-American scientist grew more disillusioned with academia the longer he worked toward his doctorate. Researchers withheld data to compete for grants, he says, instead of collaborating to solve big problems. “The further I went in my Ph.D. program, the less value I felt I was contributing to society,” he says. Seeking a fresh start, Jakubowski bought 30 acres of Missouri farmland and a tractor. Life in relative seclusion proved uneventful until, one day in 2008, his tractor broke down for the second and last time, spurring him to start an open-source industrial revolution.

To Jakubowski, the tractor seemed designed to fail. Why should he sink more money into fixing it or buy a replacement? He wanted a simple and useful machine, and one he could repair and upgrade on the fly. “It boiled down to lower cost in the long run,” he says.

Jakubowski built the first LifeTrac, as he calls his DIY tractor, in three months for $6,000—about $30,000 less than a comparable mass-produced model. Seeing room for improvement, he built a second prototype in just six days. He posted his progress on the tractor and other machines to an online wiki, which attracted followers, who suggested their own design tweaks. Some even visited in person to help with builds—and Open Source Ecology took off.

Led by Jakubowski, the group now designs open-source agro-industrial machines on his “Factor e Farm.” The fourth iteration of LifeTrac isn’t like the industrial equipment on most farms; it works with a variety of custom attachments, including two removable, office-copier-size hydraulic engines called Power Cubes. The cubes also power other pieces of the Global Village Construction Set: 50 machines—ranging from 3-D printers and CNC mills to bakery ovens and brick presses—that the group deems essential to modern society (see “Multipurpose Power,” next page).

Jakubowski isn’t preparing for the apocalypse, even though his civilization starter kit might come in handy after one. Rather, he wants to equip the world with affordable tools that enable productive farming, manufacturing, and other accoutrements of civilized life. Open Source Ecology has prototyped 15 of 50 designs so far, and Jakubowski plans to create the rest by the end of 2015.

Once all of the blueprints hit the Web, the group will shift from prototyping to multiplying. The idea: With a few raw materials and a starter construction set, users could copy all the machines. Jakubowski hopes to field-test the concept around the world at centers where people learn to build the machines—and, in the spirit of open source, improve the original designs. “This isn’t about free versus paid,” Jakubowski says. “When people are free to build on each other’s work, innovation can increase exponentially.” 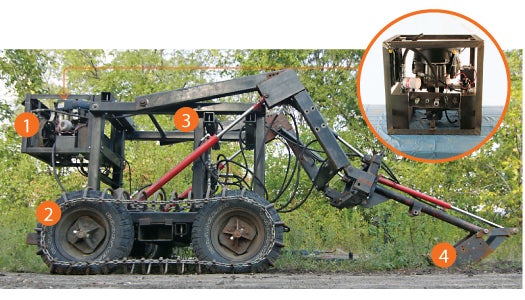 2) Hydraulic motors drive the wheels, which operate in pairs to move the 4,000-pound tractor on tank-like treads. When equipped with two Power Cubes, the LifeTrac can drag two tons of weight.

3) LifeTrac’s creators designed their multi-purpose tractor around a frame of sturdy, four-inch-wide steel tubes. Loader arms made from the tubes can lift loads weighing up to four tons.

4) Versatility defines the LifeTrac. In addition to a simple shovel, Open Source Ecology is prototyping attachments such as seeders, rototillers, well-drilling rigs, balers, and brick presses.

Maintaining a fleet of machines with different engines is arduous and expensive. The Global Village Construction Set attacks both problems with a single, versatile power source called the Power Cube. Below are a few of the machines and capabilities that a cube could enable by 2015.