MakerBot will open a 3-D printing shop on Sept. 20 in New York City. Inside, a new breed of machines prints out designs from the web. The hope: to make the hobby mainstream. 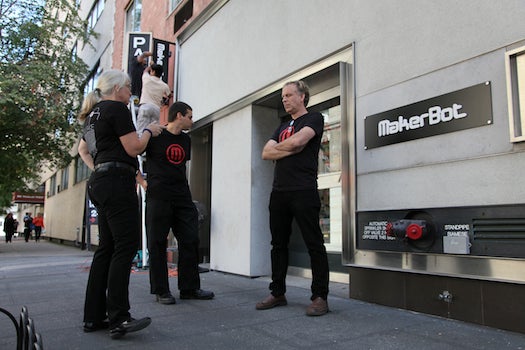 MakerBot, the unofficial leader of the hobbyist 3-D printing movement, is putting the finishing touches on a consumer store located in the posh Manhattan neighborhood of NoHo.

Sure, the rare 3-D printer can be found in the corners of business service centers across the United States. But MakerBot claims their location at 298 Mulberry Street is the first one in the country dedicated to selling 3-D printers, supplies for the machines, and bespoke objects printed on-location.

If the new business proves successful, 3-D printing stands to expand from a relatively high-cost hobbyist venture into a mainstream consumer market.

“This is the first retail 3-D printing store” in the United States, said spokesperson Jenny Lawton from inside the shop. “We haven’t combed the world over, but we’re pretty sure it’s the first … of its kind.”

On the heels of today’s announcement the company also unveiled a 3-D printer called Replicator 2. The device is about the size of a cooler and can build objects three times more finely than MakerBot’s previous desktop 3-D printer. It can also print more than a third larger, or about size of a big loaf of bread.

“It sets the standard in desktop 3-D printing,” said MakerBot CEO Bre Pettis during a press briefing. “[Printed objects] won’t feel rough like hobbyist 3-D printers’ of the past.” 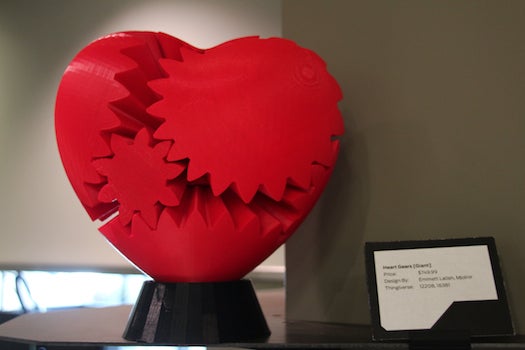 Things From the Thingiverse

Pettis and others founded MakerBot Industries in Brooklyn in 2009. Replicator 2 marks the company’s fourth machine, but they plan to sell a fifth model early next year called the Replicator 2X — a device branded as experimental to cater to get-under-the-hood extreme hobbyists and professionals.

To show what the Replicator 2 can do, MakerBot sells models from its home-grown online community called Thingiverse. At that website, users upload their 3-D models, license them, and allow other enthusiasts to download and then print them for free.

During PopSci’s visit on Sept. 18, we saw watches, bracelets, a model house, jigsaw hearts, a man’s bust and even a pliable trilobite for sale. Most of the items cost between $50 to several hundred dollars.

But for those on a budget, a Japanese gumball machine offers $5 cats, robots, apples, stick figures and other collectible knick-knacks.

Lawton says MakerBot doesn’t allow customers to order any one of the 28,000-plus designs on Thingiverse and have it printed for pickup in the store. MakerBot curates the selection, and that seems to be their business case: Draw people in, show them the possibilities, and convince them to fork over $2,199 for their very own machine.

“You can always buy a Replicator and some plastic, take it home and make whatever you imagine,” Lawton said. 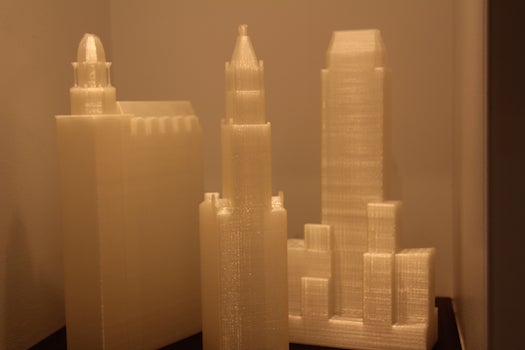 Competition in the 3-D printing market is escalating as other companies try to grab a slice of the pie. Shapeways, for example — another New York-based 3-D printing company — allows users to upload their designs, print the object, and have it shipped to them.

Until now, however, no company in the U.S. 3-D printing market had a physical toehold in the retail world. (Caveat: A company in Switzerland opened a concept store last month.)

Although MakerBot is a competitor to Shapeways, that company offered their support.

“We’re thrilled that MakerBot is bringing this incredible technology to a retail environment,” wrote Carine Carmy, Shapeways’ marketing director, in an email to Popular Science. “Once you see how 3-D printing works, the wheels start turning and you start to re-imagine the objects around you,”

MakerBot says it has big plans for the next five years but would only reveal one of them: “Our goal is to take over the world with 3-D printing,” Lawton said.

Correction: Jenny Lawton was misidentified in the original story. Her name has been corrected throughout the piece.