The coloring of a raccoon-eyed dinosaur could reveal its habitat

Now we can understand more about dinosaurs’ environments based on their appearance. 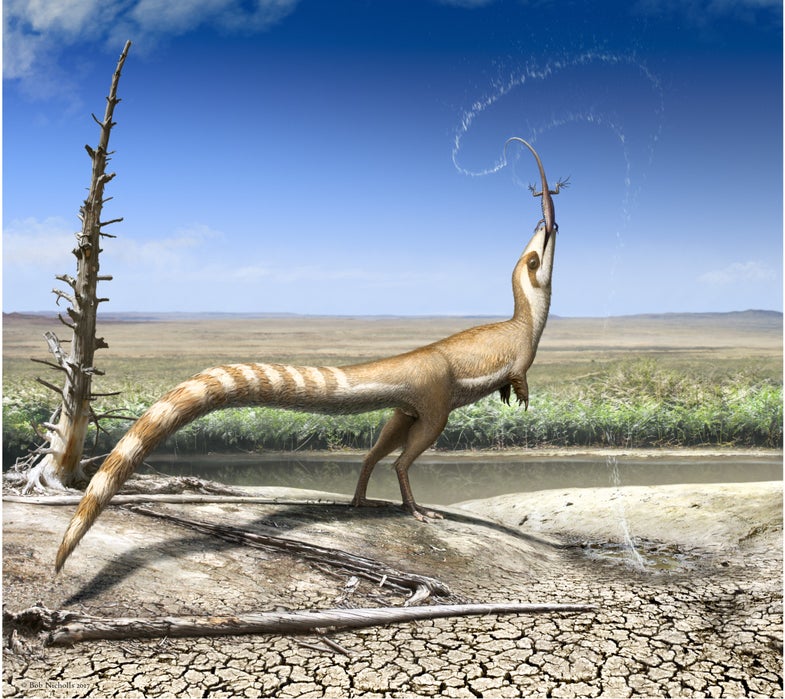 Sure, a turkey seems pretty harmless sitting there all carved up in the middle of the dining room table. It seems harmless. But if you’ve ever been chased by a gigantic butterball of feathers and fury while innocently wandering through your own front yard, you know that even turkey-sized creatures can be intimidating in their own right.

That’s the case with Sinosauropteryx, a 130-million-year-old dinosaur from China. In a study published in Current Biology, researchers found that this dinosaur’s color patterns indicate it likely lived in an open environment, with very few trees, where it could hunt lizards—lizard-like bones were found in the stomach region—and try to avoid being hunted itself.

You might remember Sinosauropteryx from a study seven years ago. Then, it gained notoriety for being one of the first dinosaurs whose colors could be definitively identified. Now, researchers think they have a better idea of how that coloring was distributed over the body.

It seems that this particular dinosaur had a dark back, a striped tail, and a lighter underbelly that ended quite high up on the dino’s sides. Oh, and a mask.

“The bandit mask was really amazing to discover,” Fiann Smithwick, a lead author of the paper from the University of Bristol, said in a statement. “It’s a pattern seen in numerous living animals today.”

The trash panda-like coloring might have been used as camouflage, helping hide the dinosaur’s eyes amidst darker fur to conceal it from potential predators or prey, or it could have helped ease the harshness of the sun reflecting into its eyes. The lighter coloring on its underside is similar to camouflage patterns seen on animals today that live in open areas like savannahs or plains.

The environment that Sinosauropteryx lived in was vastly different from the home of another small dinosaur, Psittacosaurus, whose coloring was analyzed last year by the same researchers. They found that Psittacosaurus, with its mostly dark coloring, likely lived in a more forested environment. But both dinosaurs lived in roughly the same geographic zone, a region in what is now China that the authors refer to as Jehol lakes.

“Jehol clearly was not only rich taxonomically, but was also likely varied in the habitats available to animals and consisted of a mosaic of environments, which may explain the area’s extraordinary biodiversity,” the authors write in the paper, pointing out that over the 10 million years encompassed in these fossil-rich layers, the climate and vegetation could also have shifted many times.

In only seven years since we figured out how to decipher the coloring of dinosaurs, we’ve already come a long way. We know know that some dinosaurs were irridescent, we’ve discovered how to use particle accelerators and metals to decipher colors. But now we’re starting to go beyond mere appearances and get at the heart of how those colors related to the dinos’ lives, and environments.

Maybe someday we’ll be able to color in even more details about the life and times of dinosaurs, from the turkey-sized to the tyrannical and everything in between.