How Many Submarines Does It Take To Break The Ice?

Just one. Watch the USS Hartford emerge from the Arctic like a terrifying sea creature 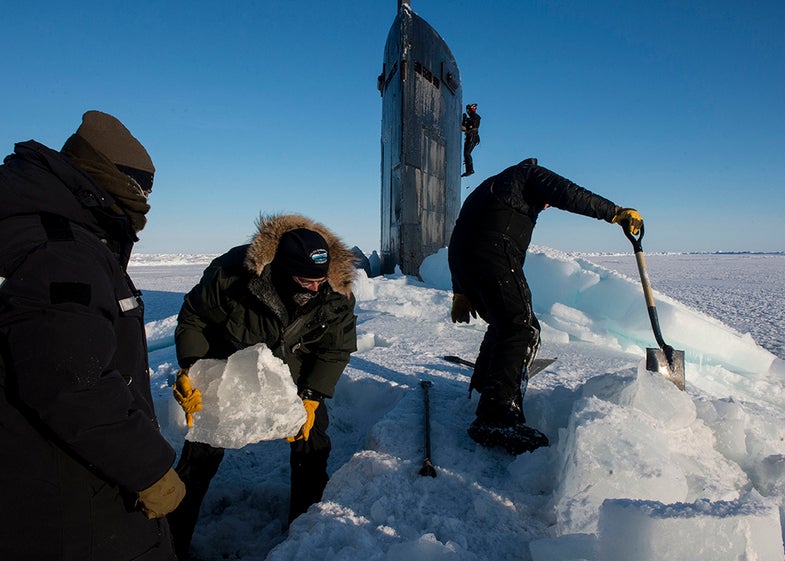 X almost marks the spot. The USS Hartford’s aim was just a little off, and as the nuclear attack submarine surfaced through the ice of the Arctic circle, the view from the aircraft overhead shows a giant X carved into snow just to the side of the vehicle. The Arctic is fortunately an empty place, and precision surfacing isn’t really the point of the vehicle. Instead, it was there as part of the ICEX military exercises, practice for the coldest war of all.

From the U.S. Pacific Command:

By breaching the ice, USS Hartford (and its compatriot, the USS Hampton, shown above) joins a long tradition of nuclear submarines in the Arctic circle. The USS Nautilus was the first to cross under the Arctic circle in 1958. In March 1959, the USS Skate breached ice at the North Pole, and since then, many other American submarines have done the same.

As an attack sub, the USS Hartford’s job is to seek out other submarines and, in the event of a war, destroy them before they fire nuclear missiles at targets on land. That makes it different from a “boomer,” or the kind of sub with nuclear missiles onboard.