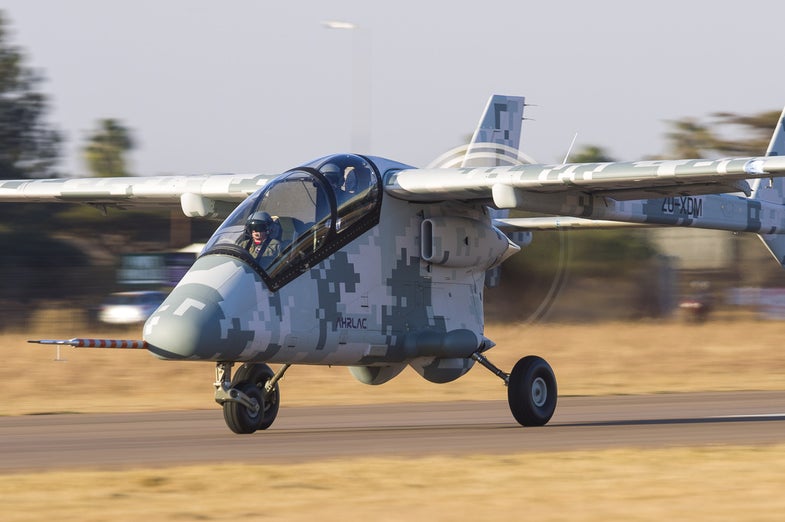 South Africa’s AHRLAC is a weird bird. With a narrow, high body, and stadium seating for the pilot and sensor operator, it looks like a rough draft for an F-4 phantom. A pusher prop and slightly forward-swept wings seem like an aviation mistake from the First World War. Built as a bushwacking scout, able to operate from rough fields without runways, AHRLAC is an odd drone alternative, a peopled plane built to do a drone’s job. Now, thanks to a deal Paramount (AHRLAC’s maker) struck with Boeing, it’s going to get weapons.

AHRLAC’s top speed is a modest 310 mph, about the same as a Reaper drone and about twice that of a standard Huey helicopter. With an expected endurance of over 7 hours, it’s better suited for long patrols than helicopters, maybe even at a lower cost than sophisticated drones. From Defense News:

Even with sensors and weapons from Boeing, AHRLAC won’t be winning any dogfights. Instead, it will do the messy boring work of low-intensity wars and patrols, hunting for insurgents, poachers, and other violent armed nonstate groups big enough to warrant a response but not big enough to carry anti-air weapons. AHRLAC may not replace the A-10 any time soon (or ever), but for the people on the receiving end of their weapons, that won’t matter much.