Why This Piece Of Paper ‘Exploded’ In A Hydraulic Press 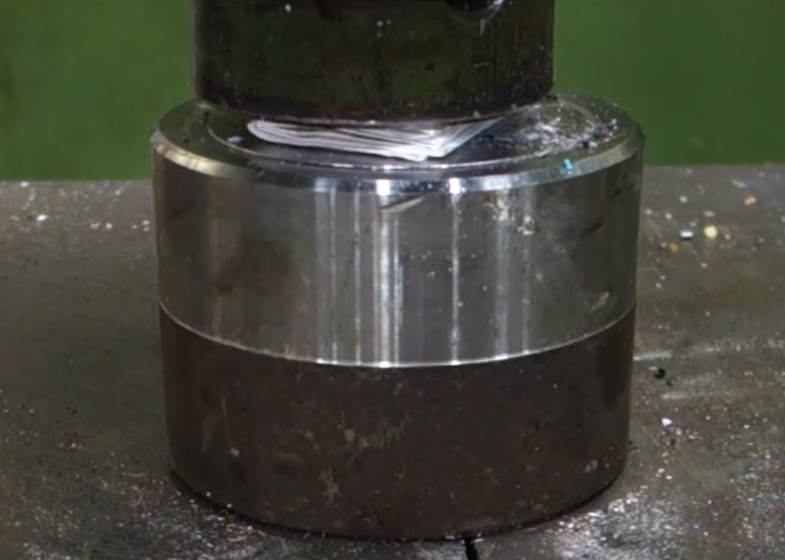 There’s an old myth that you can’t fold a single sheet of paper in half more than seven times. Thanks to Mythbusters and Britney Gallivan we know that with very specialized (large and thin) sheets of paper, you can fold paper 11 or 12 times respectively. But what about a standard piece of paper that you might see in a copier?

One YouTube channel that crushes things with hydraulic presses (awesomely) decided to give it a try.

In the video seen above, a man folds a piece of A3 paper (11.7 inches by 16.5 inches) in half five times by hand. Then things start to get interesting. For the fifth and sixth folds, he brings in his hydraulic press to give the paper a little extra crease. He attempts to do the same for the seventh, at which point, the paper seems to explode, leaving a brittle mass where the once-flexible paper used to be. What the heck happened?

Popular Science spoke to Thomas Amidon, a professor of Paper and Bioprocess Engineering at SUNY’s College of Environmental Science and Forestry. After watching the video a few times, Amidon thinks that the most likely explanation for the catastrophic failure of the paper wasn’t the cellulose (wood) fibers, but another component of the paper, calcium carbonate.

“Paper without some help would not be as opaque,” Amidon says. “Thats where the filler, the calcium carbonate comes in.”

Amidon explains that lab-grown crystals of calcium carbonate are added to paper at the paper mill, making them more opaque and stiff. The amount of calcium carbonate in any individual sheet varies by the type and use of the paper, so there’s no way of telling what the exact proportions were used in this particular piece, but it’s likely that the paper contained it. An additional source of calcium carbonate can be added to paper in the form of coatings which are used to make magazine pages glossy and bright. In a coating, a mineral or clay is mixed with a glue (usually latex) and applied to the base layer. Some coatings are used to make paper shiny or smooth, and the paper in the video does look like it’s ready for its close up.

You’ve probably heard of calcium carbonate before–it’s a common mineral that is a building block of coral reefs and some forms of limestone. Amidon thinks that there was enough of the substance in the paper that when the high load of pressure from the hydraulic press was applied to the small area, the stress was just too much for the mineral, and it collapsed.

This is much cooler. Thanks calcium carbonate!