The Search For A Better Lethal Injection

Midazolam was just approved for executions, but science still has a lot of questions about how it works. 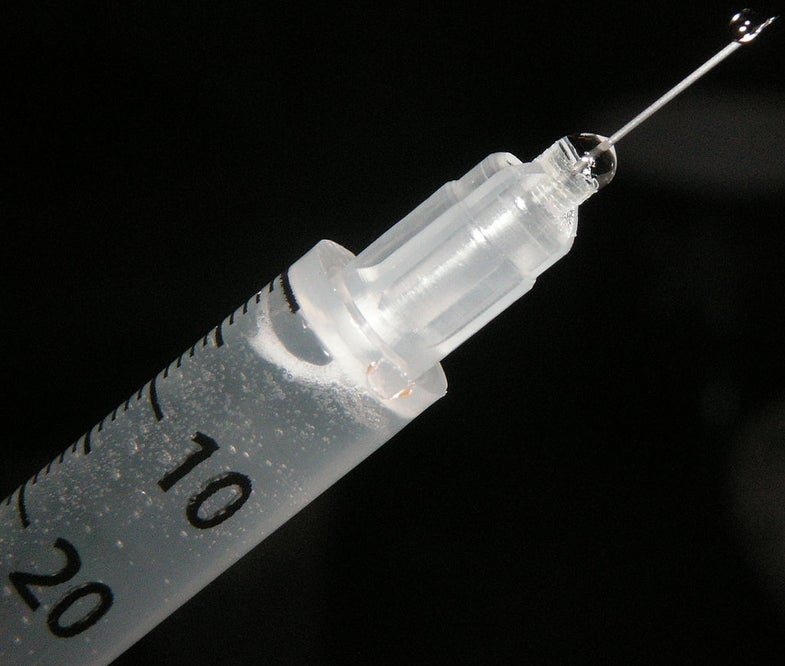 Midazolam is a light anesthetic used in thousands of medical procedures all over the United States. But for the past few years, it has been used for a more sinister purpose: in lethal injections.

For states that use the death penalty, lethal injection is the primary way it’s done. The department of corrections in each state develops its own protocol that will, ideally, kill a prisoner without causing too much pain. Several states use a three-drug cocktail to execute a prisoner—one to numb him so he doesn’t feel pain, one to paralyze him so he can’t fight his executioners (or so that those watching can’t see him writhe in pain), and one that stops the heart and kills him. More recently, some states started to use just one drug, a very heavy dose of an anesthetic.

The problem is that there’s not a lot of science backing up the drugs used in lethal injections. While a prisoner’s actual death is not hard to observe, executioners don’t know much about whether or not he’s in pain, especially if he’s been given a paralytic agent. That’s because, on principle, modern doctors and researchers don’t investigate drugs that they know are designed to kill. And while it’s great for the common good that smart doctors are using their time, money and brainpower to save lives, it also means that people being put to death may be suffering, and there’s no way for us to be sure.

After the botched execution of inmate Clayton Lockett in Oklahoma, several of his fellow prisoners brought a lawsuit claiming that the use of midazolam constituted cruel and unusual punishment.

This week, the Supreme Court ruled against the inmates. Justice Samuel Alito wrote for the majority:

What exactly is midazolam, and why are there still so many questions about its efficacy? Popular Science spoke with David Lubarsky, an anesthesiology professor at the University of Miami who has published extensively on the chemicals involved in lethal injections. The conversation has been lightly edited.

How did midazolam become the go-to drug for lethal injections?

The main reason is it’s readily available—it became the go-to drug because the states can easily get their hands on it. The other two drugs that had been used previous have European manufacturers who basically just stopped shipping it to the U.S. because they didn’t want their drug used in lethal injection protocols. Midazolam is a default drug, not a chosen drug.

What is it typically used for?

The drug is not a complete anesthetic—you can’t actually do surgery using just this drug. You can do minor procedures that are not injurious, like a colonoscopy. But not heart surgery or hip replacement. Potassium chloride [the chemical combination that stops the heart] is extremely painful, and it’s likely that midazolam is insufficient to cover the pain. There’s the crux of the discussion—is it or is it not appropriate, given the circumstances? It’s not designed to cover the pain completely.

What are other questions that researchers have about how midazolam affects the body?

We know how it works in low doses, and it’s not a complete anesthetic. It’s not guaranteed that everyone will go to sleep with the drug, because people have paradoxical reactions to it. We [doctors] have also never administered these doses to humans before and we have no idea of impact. We know that states’ presupposition is if you administer 10 times the drug’s dosage, it’s 10 times as effective. But that’s a factual error—the ceiling effect, which is well described in literature, says that if you give more of a drug, it doesn’t do anything. It’s like when you put too much sugar in your iced tea, at a certain point you just can’t dissolve any more—you get to a saturation point. That’s exactly what happens here—you get to a saturation point for the available receptors for drug, and adding more doesn’t increase the effect.

Over the past few years there have been a slew of botched executions. What’s going on here?

Well for one thing, people are looking more closely. But another reason is that these aren’t trained physicians [administering the injections]—prison guards are administering a complex medical regimen and things go wrong. Doctors can’t be involved in making these protocols because they are healers and helpers and lifesavers, they would be violating the Hippocratic oath.

So no researchers can be involved in even testing these drugs or doses for this purpose, then. The issue seems to be at an impasse as far as developing and investigating a drug for lethal injection that isn’t cruel and unusual. What does the lethal injection of the future look like?

I am not hopeful that the government can turn prison guards into high-performing, trained medical professionals. And I have doubts that the attempt to sanitize execution through the misuse of drugs designed to be life-enhancing will turn out to be a productive approach.

What are the challenges moving forward?

All protocols have some flaws. But the real challenge is the fact that you cannot train high school educated prison guards, or even wardens, to carry this out well. They rarely do injections and clearly know nothing of the signs of adequate anesthesia, so they can’t suddenly become highly experienced medical caregivers who can carry out and monitor a complex medical process. And medical professionals find participation in lethal injection unethical, as they are healers and bound by the Hippocratic Oath that we all take to “first, do no harm.” These irreducible facts mean that, though the death penalty is constitutional, the chosen process of lethal injection may be fatally flawed and we keep finding this out the hard way by evidence of botched executions.