Safer, stretchier, and coming soon to a stomach near you 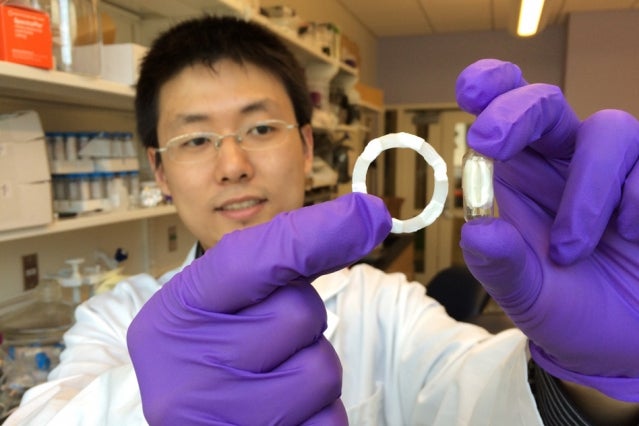 In recent years researchers have been looking for more efficient ways to deliver medicine over an extended period of time. To prevent drastic changes in hormone levels, for example, or make sure people don’t stop taking medication too early, biomedical specialists have looked at surgically placed implants or new chemical configurations for the drugs in question. Now researchers from MIT have created another alternative: they’ve developed a new ring-like device made of a polymer that can deliver drugs to the stomach over the course of a week without putting the patient at risk, according to a study published yesterday in Nature Materials.

Swallowable, extended-release devices for your stomach have a number of qualities that make them difficult to engineer. They need to be stretchy and flexible so that they can be folded up into a pill, swallowed, then expand in the stomach and still work. If they’re too big, they run a greater risk of breaking. If they’re too small, the devices can put the patient at risk of an intestinal blockage—a life-threatening condition that requires immediate surgery, which can happen if the device slips through the pylorus, the hole connecting the stomach to the intestine (just 1.5 to 2 millimeters in diameter).

But MIT researchers created a material that can satisfy all these requirements. Made of nontoxic, degradable polyester gel and treated to be flexible, the ring-shaped device unfurls in the stomach minutes after being swallowed to a diameter larger than the pylorus. But it has another important quality as well: the device is activated by pH. It remains solid in the acidic conditions of the stomach, but dissolves if it starts to enter the neutral pH of the intestine. When the researchers tested their prototypes in pigs, the device expanded within 15 minutes and stayed in the stomach for seven days before dissolving.

MIT is negotiating an agreement with biotechnology company Lyndra to bring the devices to the market, releasing drugs over weeks or even months. But the researchers anticipate that the new material could be useful for other medical applications, like in bariatric surgery to treat obesity or to create ingestible electronics to diagnose and monitor conditions in the gastrointestinal tract.