The images coming out of the Philippines are wrenching. Last week, the country was hit with Typhoon Haiyan, which may... 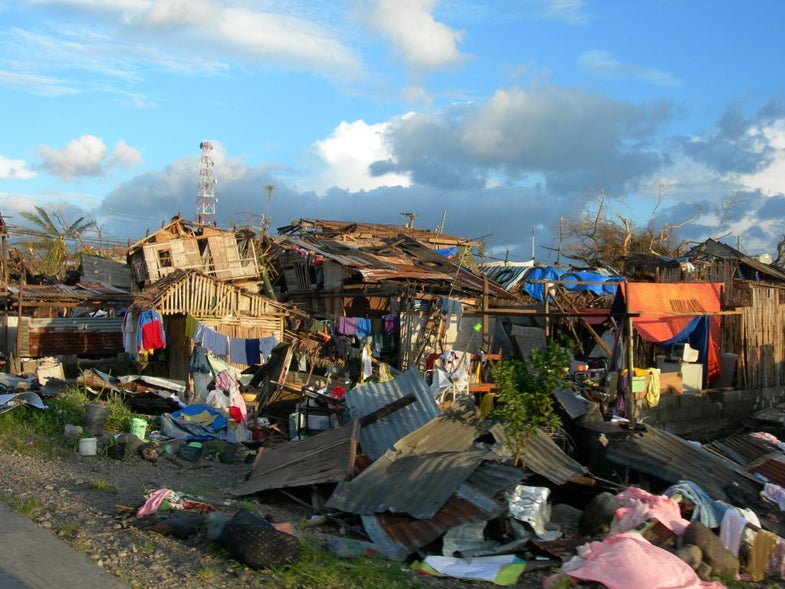 The images coming out of the Philippines are wrenching. Last week, the country was hit with Typhoon Haiyan, which may be the strongest typhoon in recorded history. Then, it was then pelted with a tropical storm (not as badly as predicted, but the rain did threaten flooding and mudslides). The government has confirmed 1,774 deaths, although the count is expected to grow, and it says over 6.9 million people have been affected and nearly 320,000 have been displaced. Other sources report even higher numbers.

What does this mean for public health in the Philippines? Is the country poised for disease outbreaks?

According to Glenn Morris, the Director of the Emerging Pathogens Institute at the University of Florida, the most imminent dangers are not from infectious disease, but from trauma: scrapes and scratches that may get infected, broken bones, and any other injuries sustained in the storm’s strong winds. People with chronic illnesses, the estimated 95,270 pregnant women in the typhoon zone, and those with other daily health issues are also a concern. The World Health Organization and other groups are trying to fly in medical materials, including mobile hospitals with surgical supplies, antibiotics, and other basic medications.

Morris says the next two tiers of concern for public health are diarrheal diseases and vector-borne diseases.

Diarrheal diseases become a problem when there is damage to the water purification system and feces from people who are ill mixes with drinking water. Common examples include bacteria such as Shigella, E. coli, and Salmonella or viruses such as norovirus. Any of these can cause severe gastrointestinal distress and dehydration, though they are not likely to cause widespread fatalities.

More worrisome is cholera, which can spread quickly and cause many deaths, particularly after a major catastrophe like a typhoon. The cholera outbreak after the 2010 earthquake in Haiti, for example, has led to 684,085 cases and 8,361 deaths as of last month. But a similar outbreak in Philippines is not likely, in part because the country has a good public health infrastructure.

“There is the possibility that there might be some cholera transmission,” says Morris, “If there is a reasonable public health infrastructure and the ability to manage cases if and when they appear, I’m not too concerned about it. But it’s always a thing in the background that you worry about.”

The key to controlling diarrheal diseases will be providing people with clean water. The WHO is coordinating efforts to get water purification tablets to the region, and charities are trying to send water treatment systems. Identifying outbreaks before they can spread will also be crucial.

As far as vector-borne illnesses go, the main two threats in the Philippines are malaria and dengue. Both are spread by mosquitoes, which have more opportunities to reproduce in the standing puddles of water after a major storm. Both illnesses are present in the Philippines, and people who are displaced and sleeping outdoors are the most vulnerable to bites.

It’s too early to tell what parts of the infrastructure will hold up enough to withstand the spread of infectious disease and which will not, and reports out of the region aren’t promising. Storm damage has reportedly prevented aid workers from reaching remote and badly wrecked areas. Still, here’s hoping that health experts can hold back infectious illnesses so they can focus on more pressing medical problems.

The World Health Organization released a health assessment for the Philippines post-typhoon. In addition to the potential for diseases mentioned above, WHO is also concerned about the following:

-Acute respiratory illnesses including pneumonia, bronchiolitis, and bronchitis. This is particularly worrisome for children under the age of five.

-Measles. While vaccine coverage is apparently pretty good for most of the Philippines, this isn’t the case in the parts that were hit the worst by the typhoon.

-Leptospirosis: This bacterial illness is common in rat feces, which can contaminate drinking water.

-Tetanus: People with cuts and wounds are vulnerable to _Clostridium tetani _bacteria. While a relatively high number of children in the Philippines are vaccinated for tetanus, this isn’t true for the regions that have the most damage.

-Tuberculosis: The Philippines has the 9th highest TB levels in the world and the 2nd highest in the Western Pacific. It sounds like the health organization is mostly concerned with continuity of treatments for those already infected.

-Meningococcal disease: This bacterial infection can spread easily in cramped quarters. There was an outbreak in the Philippines in 2004-2005.

-Polio: While there have been no reports of polio in the Philippines for two decades and it was considered eradicated by 2000, there is a low rate of vaccination. Polio recently, and unexpectedly, cropped up in Syria.

-Also, an update on malaria: While there are some parts of the Philippines where malaria is a problem, it isn’t widespread throughout the country.

For more, read the full report.