The Inconvenient Immigration of Chikungunya

Immigration has become a major point of discussion of late. While human manifestations have grabbed most of the headlines, there... 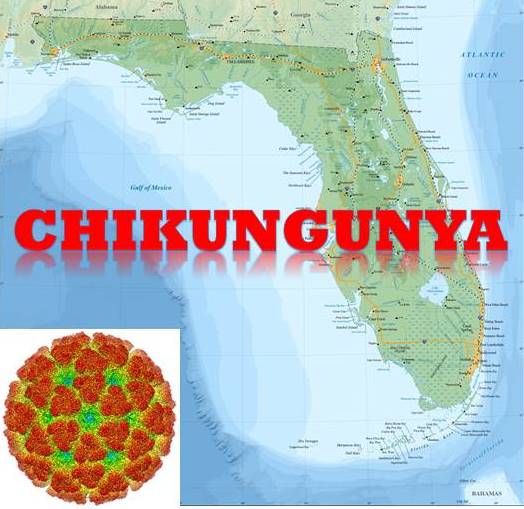 Immigration has become a major point of discussion of late. While human manifestations have grabbed most of the headlines, there is another microbial migration happening that has been met with little reaction. This new resident is a virus known as Chikungunya – or CHIKV – and it appears to have found a new home in Florida.

The virus was originally discovered in Tanzania in the 1950s and named after a word in the Makonde language meaning, “that which bends up.” The term perfectly describes an individual suffering from infection. Symptoms include fever and extremely painful joint pain and swelling preventing the person from moving normally. Other manifestations of infection include acute fatigue, vomiting, anorexia, rashes and even ocular complications. Though it can be lethal, death is rare.

For decades, the virus was thought to be contained in Africa however, by the turn of the millennium; cases were being reported elsewhere. Outbreaks in the hundreds of thousands began to appear in areas such as Indonesia, Oceania, Europe and India; the latter estimated at 1.4 to 6.5 million cases. This suggested the virus was capable of travelling not through mosquitoes, but humans. The most pertinent case to support this theory occurred in the Ravenna Province in Italy where an outbreak revealed the virus had become endemic in the local mosquito population.

The theory prompted researcher to figure out how the virus infects and whether there was something behind the biology of the virus aiding the global spread. By 2007, there was a preliminary understanding of how the virus infects. The results suggested the virus could infect immune cells and become systemic. A parallel clinical analysis of a recent outbreak on Reunion Island in the Indian Ocean, found the amount of virus produced during an infection can be as high as one billion per milliliter of blood. These two points illustrated the potential for a mosquito to acquire the infection through a bite and potentially transfer it to another human.

With the human potential established, researchers needed to know whether mosquitoes in the United States were even capable of harboring the virus. In 2008, a group from the University of Florida provided the unwelcome news. Mosquitoes in the State were biologically able to acquire the virus and could be a factor in giving the virus a chance at migration. At the time, however, the number of infected people was low and there appeared to be little concern.

Then the unthinkable happened. CHIKV somehow found its way to the Caribbean. In December 2013, the first domestic cases were reported in Saint Martin. This autochthonous spread suggested not only nationals but also internationals were at risk of infection and spread. Over the coming months, this is exactly what happened.

The virus spread to several other Caribbean Islands and South America. By May, the number exceeded 100,000 suspected and 4,400 laboratory confirmed cases. The situation was so dire public health officials began to record infections not in absolute numbers, but by the number of cases per 1,000 people. In Saint Martin, the level was the highest at 115 cases per 1,000 people or 11.5%. For the United States, there was no option than to accept Puerto Rico would soon become victim to the virus and so far nearly 200 people on the island have been infected through local infection.

The CDC had no choice but to declare a travel advisory to anyone wanting to head to the Caribbean. The means of prevention and seeking medical attention were prominently declared in the hopes of limited infection and spread. Yet, despite the warnings, the numbers of infections in travelers grew closing on the 400 mark. But while these were expected, the two domestic cases in Florida, the first on continental soil, still appeared to be a surprise.

There may be a few reasons for this reaction to the inevitable. Unlike the appearance of another unwanted visitor, Ebola, which was controlled and supervised by the world’s best public health officials, the arrival of CHIKV has been completely hidden to the public eye. The virus has slowly made its way through travel from the heart of Africa to American soil. Moreover, the spread until recently has been slow at best. The requirement of a virus travelling from a human to a mosquito to another human is somewhat unlikely. In all good mathematical estimations, this should not have happened. Yet, it did.

The story of Chikungunya’s introduction into America is still being written although there are hopes the story will soon end. There are currently efforts to control mosquito populations to prevent diseases such as dengue and malaria. We may soon be able to use the technology to eliminate CHIKV to prevent further geographical spread. For now, the immigration problem will seemingly increase as the virus spreads through both mosquites and humans. As for Floridians, they are left with little choice but to get used to an unwelcome addition to the population and to take precautions to prevent infection.