Although pasta science points to it being healthier than other processed carbs, there's not much else to say about it. 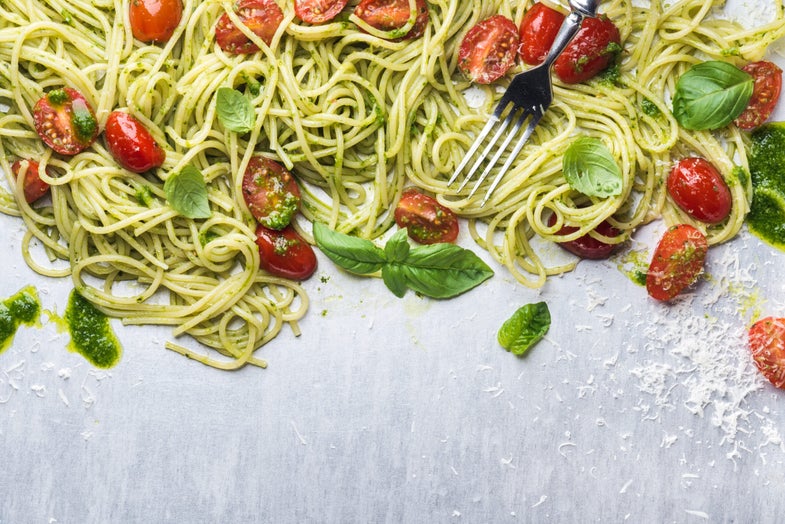 The cream-soaked, free-bread-basket excesses of fancy “Italian” dining of the past few decades have given pasta a bad name—one that Big Pasta has invested serious money into trying to expunge.

Pasta is a processed carbohydrate, a category that also encompasses such dietary villains as white bread, canned fruit, and anything containing added sugar. But pasta differs from these others in that the way it’s prepared actually slows down the time it takes to digest it, meaning that unlike Wonderbread, it has relatively low glycemic index (GI). A study published today in the journal BMJ Open suggests that pasta may have a place in a low-GI diet.

Researchers at Toronto’s St. Michael’s Hospital looked at data gathered from 32 studies that analyzed the dietary effects of pasta in low-GI diets compared with the health effects of higher-GI diets. The researchers, who study the health benefits of low-GI diets more generally, wanted see whether pasta helped or harmed people placed on such a nutritional plan.

The studies they drew their data from included results from a total of 2,448 patients “who were predominantly middle-aged and overweight or obese.” The scientists extracted the data pertaining to pasta specifically and found it had a neutral effect in terms of weight gain, and may at times even have promoted weight loss, in comparison with other diets that had a higher glycemic index.

Lead author John Sievenpiper says they found “that it really isn’t a harm when it’s eaten in the context of a low-glycemic index diet.” That kind of diet, which involves consuming foods that cause less of a spike in your blood sugar because they take time to digest, “can be considered a proxy for a healthy dietary pattern,” Sievenpiper says. In other words, if you’re eating well—consuming legumes and fresh fruit and veggies and avoiding most processed carbs—you might not derail your healthy lifestyle by letting pasta back into your life… in servings of no more than half a cup, of course.

The Toronto researchers aren’t trying to make such a big claim. Based on the results of their study, Sievenpiper says, “I’d hesitate to say that pasta will give you weight loss.” The claim he will make is that pasta, in the context of the low-GI diets studied, won’t make you gain weight. We need more research on pasta before the weight loss facet of the story is understood, he says; there’s no way to know exactly what factor in the diets of those participants caused weight loss, we just know that the addition of pasta didn’t correlate with packing on pounds.

Dr. Louis Aronne, director of the Comprehensive Weight Control Center at Weill Cornell Medicine and New York-Presbyterian (who wasn’t involved in the study), says the results may point to a way for people eating low-GI diets to subdue cravings. “The problem with prescribing low carb diets—by extension, a low glycemic diet—is that people develop a yearning for carbs,” he says, “and the question is, how do you satisfy that and still have the metabolic effect of the diet.”

We crave and enjoy carbs because they provide quick blood-sugar spikes, which would have kept our hunting and foraging ancestors going until they found further food. But in a modern American diet this craving has well-documented downsides. Eaten in moderation, pasta could potentially help healthy eaters enjoy their meals and feel full afterwards.

However, Aronne says skepticism is warranted. Barilla, the world’s largest pasta company, provided funding for that 2016 study that made the ambitious weight-loss claims. This new study didn’t receive funding or in-kind support (i.e. free noodles to be used in experiments) from Barilla or any other pasta company, but several of its authors, including Sievenpiper, have received such support before. Based on the page-long conflict of interest disclosure provided at the end of the paper, Aronne says, the seven researchers named as its authors “have dozens of companies that work with them.” It’s not uncommon in the world of food research for corporations to provide funding. “Some people say that someone like that has so many conflicts that they’re not no longer conflicted because they work with everybody,” Aronne says. But it’s still something to keep in mind.

“We believe in citing everything,” Sievenpiper says. That’s why the conflict-of-interest disclosures are so long. However, there’s also the fact that the analysis draws from 32 other studies, which each have their own disclosures to make. “Certainly a number of studies would have conflicts of interest,” Sievenpiper says, “which is to say they would have been funded by industry. Most, as I recall, were funded by a combination of agency and industry.” That’s fairly typical in the food world these days, he says.

So folks told by their doctors to avoid processed carbs at all costs should probably stay away from pasta for now. But if you’re just trying to maintain a healthy diet, it seems likely that the place for pasta on your plate is as secure as always: no one kind of food is going to be the end of you if you eat in balance and moderation. If a single serving of pasta is what you need to complete a satisfying meal full of veggies, you’re probably doing just fine.