We need to figure out who gets floods and who gets drought. 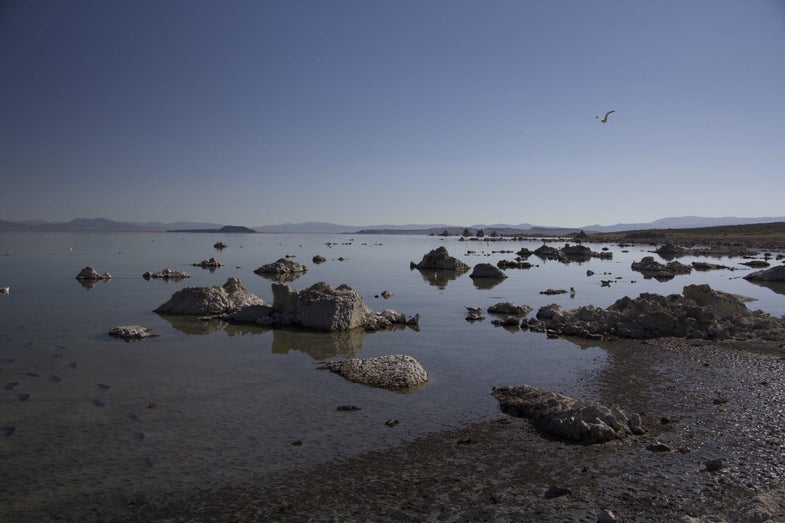 Shoreline of Mono Lake, California in 2013. Ancient shorelines etched into the eastern flank of the Sierra Nevada indicate that this lake stood at a much higher level at times when the climate was cooler. As it got warmer, the world's water system shifted starving the lake of moisture causing the shoreline to drop. Now we are witnessing a similar phenomenon. Today, as the increase in fossil CO2 warms the Northern Hemisphere faster than the Southern Hemisphere, the moisture that normally feeds the Sierra Nevada is being routed farther to the north. As a consequence, the level of Mono Lake has dropped. Aaron E Putnam
SHARE

“When the well’s dry, we know the worth of water,” Benjamin Franklin wrote in a 1746 edition of “Poor Richard’s Almanac”. Although his intention was allegorical—the 18th century equivalent of “we don’t know what we’ve got ’till it’s gone”—two centuries of questionable water management from the Dust Bowl to the recent California drought would transform his metaphor into a truism. Water is life, after all, and according to a recent study in the journal Science Advances, climate change threatens our supply by shifting where future rain will fall.

“We’re interested in how the planet’s water resources are going to change in the future with a warming planet,” says study author Aaron Putnam, an Assistant Professor at the University of Maine’s School of Earth and Climate Sciences & Climate Change Institute.

In concrete terms, this means that the tropics will get wetter and the subtropics and middle latitudes will become drier, especially in June, July, and August. Monsoons in the northern hemisphere will get stronger, and those in the southern hemisphere will weaken. The idea of a stronger monsoon season in the north is particularly striking given that some parts of Asia are already struggling with the annual deluge. Just this week, monsoon-triggered landslides, mudslides, and floods in Sri Lanka killed more than 90 people.

The drylands of the western United States, inner Asia (like Mongolia), and the Middle East will become even drier, while Amazonia will shift northwards, making Venezuela wetter. Eastern Brazil and the Bolivian Altiplano, a region that includes parts of the Amazon rainforest, will get drier. Over the past decade, a mix of deforestation and climate change have already allowed the ordinarily wet rainforest to burn.

The researchers came to this conclusion by analyzing paleoclimate data from around the world, to see how precipitation in the past responded to previous shifts in climate.

“You can think of paleoclimate data as the geological record that are preserved in various ways on the Earth’s surface and its geochemical history,” says Putnam. “I think the most visual and perhaps most robust example particularly for tracking Earth’s rainfall patterns and precipitation around the planet are these closed basin lakes that fill up and then evaporate away, they’re telling us about past rainfall. If you go to a place like the great basin of the American southwest, if you were to fly over say from New York to San Francisco and look down out the window, you’d see those dry intermontane basins in Nevada are etched at the rims with ancient shorelines. That means they were filled and that was a lake district at some point in the past.”

The paleoclimate record includes everything from these closed lake basins, stalagmite data, to lake sediment data and ice core data, as well as techniques like radio carbon data and uranium thorium dating, which together create a cohesive picture. By looking backwards, we can understand better how the Earth will respond to the conditions we’re creating with manmade climate change.

“This is knowledge that we came about in the nuclear revolution,” says Putnam, “and understanding of nuclear physics. These clocks are extremely accurate. A lot of our understanding of not just geology and past climate, but also of our world and technologies, are built from the same innovations that gave rise to these geo-chronological tools.”

It’s not just that a lake in Nevada tells a geological story, but the fact that the same story is represented in the data that they found from a stalagmite in China and an ice core sample taken from Antarctica. It’s not dependent on a particular tool—lots of corroborating tools and methods give the researchers a reasonable degree of confidence in their results.

Does that mean that no uncertainty exists? Of course not. More research—including old fashioned geological data collection—is necessary to get a clearer picture. For now, Putnam says that in terms of extrapolating forward about future impacts, the data makes the most sense in terms of regional patterns on a decade-long scale. You can say, for example, that over a period of around ten years, the American west is going to be drier—but of course in any given year within that period, it can still be unusually wet, especially in smaller locations.

This study is a step forward—not the end of the line—in predicting water resources, but it’s important that we do more to hone those predictions.

“We need to be able to predict how water will be redistributed around the world, because we live in a world now with 7 billion people—it will be double that in not too long— so we’re really dependent on water resources for food security and for national security,” says Putnam.

Researchers have linked the conflict in Syria, in part, to a drought made worse by climate change, while in 2015 the Department of Defense released a report which states that “Global climate change will aggravate problems such as poverty, social tensions, environmental degradation, ineffectual leadership and weak political institutions that threaten stability in a number of countries.”