Climate change is likely a factor 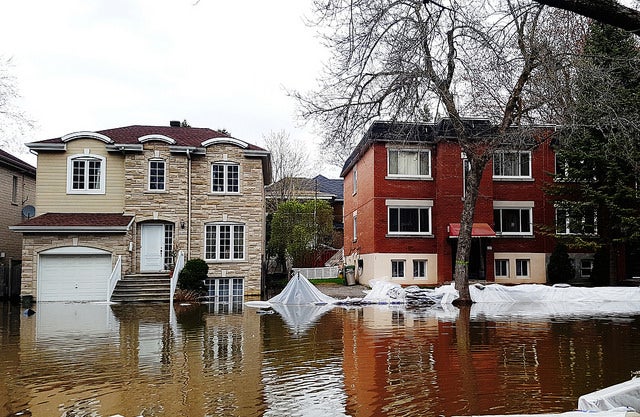 Western Quebec and Eastern Ontario are currently being slammed by 200 year floods. Exile on Ontario Street via Flickr
SHARE

“You know I’ve often said in Canada that our greatest attribute, in terms of the weather, is that the weather hits and runs,” said David Phillips, the senior climatologist with Environment and Climate Change Canada (the agency tasked with implementing the Canadian government’s environmental agenda). “It doesn’t stand around and torment you and clobber you and tease you like it does in other latitudes, like in Florida or the Carolinas. A hurricane can stand there for two or three days and then come ashore, go back out and then come back in again. It just absolutely wears you down, because it doesn’t go away.”

In Canada, even terrible weather knows it’s impolite to overstay. But this week’s rains, which inundated the residents of Eastern Ontario and Western Quebec with a catastrophic deluge of water, were nigh unCanadian.

“That storm just crawled up to Canada and then it just stayed there like an unwanted house guest. It wouldn’t leave,” said Phillips. “And it just rained, and rained, and then more rain. In Ottawa [Canada’s capital], over three days there were three hours where it didn’t rain. We’ve never seen weather like that before.”

The malingering storms caused historic flooding—Canada’s public safety minister Ralph Goodale called it the worst flooding in fifty years. Ottawa, which normally receives around 3.2 inches of rain in the entire month of May, was drenched with 4.42 inches in just the first ten days of this month. Similarly, Montreal—which ordinarily gets 2.29 inches of rain in May—has already seen 2.6 inches. It’s not surprising that the Ottawa and St. Lawrence Rivers are beginning to overrun their banks, breaking retaining dikes and flooding communities. Thousands have been evacuated, and over the weekend the city of Montreal declared a state of emergency.

Phillips says that the recent rains weren’t the underlying cause of the flooding. They were more of a precipitating event.

“It’s been really wet since the first of January,” said Phillips. “Over the first 125 days of this year we’ve never seen wetter conditions in those areas.”

The areas that are currently flooding received more than the usual amount of snow this winter (though the snowfall was not record shattering). Montreal received 15 percent more snow than normal, while the areas around Ottawa saw around 30 percent more snow than normal. That’s exactly a major problem—this is, after all Canada, one of the snowiest nations on Earth. But then the weather did something weird: it got warm.

This year the Earth experienced the second warmest February on record, according to the National Oceanic and Atmospheric Administration (NOAA). It was the second warmest February for the United States (and the nation’s sixth warmest winter on record). Given that Canada is both located on Earth and 75 percent of Canadians reside within 100 miles of our border, our weather patterns and Canadian’s weather aren’t wholly unaligned. In fact, that storm that barreled up to Canada hit New York and New England first. On February 23 of this year, Ottawa—home to the world’s largest naturally frozen skating rink—set a heat record of 54F, dwarfing the normal high of around 9F. Montreal, known for its ‘underground city’ or network of tunnels to help residents move around without having to deal with its winter weather, was just about as warm.

A fairly warm February was followed by a weirdly cold March. “That delayed a lot of the melt,” said Bob Henson, a meteorologist and writer with Weather Underground. “And then April was not only relatively warm, but quite wet as well, which produced a double whammy. Snow melted and rain fell on top of that melting snow. You had precipitation from both sources.”

The warming Arctic, along with warmer waters and a shifting jet stream, are altering the conditions which can create a storm. In April, Montreal received 4.6 inches of precipitation, or 50 percent more rain than usual; Ottawa received 155 percent more rain than normal. And it’s not just southeast Canada that’s experiencing unusual rain. April was the second wettest April on record for the United States. Arkansas, like our neighbors to the north, is in the midst of historic floods.

The April rains and melt, “filled all of the nooks and crannies,” said Phillips. “The ground is like a sponge, and it took all of that melt water and absorbed it and there wasn’t any room left in the soil for when those spring rains came.”

And those May storms, said Phillips, “were lined up there like jumbo jets on the airport tarmac. One coming after the other out of Texas, picking up moisture from the Gulf of Mexico, from the Atlantic Ocean, they were sopping wet storms, and they arrived and they hit an area that had been vulnerable because of their brothers and cousins that had come in the previous five months.”

Given the sheer scale of the weather, one might be tempted to lay all the blame to climate change. Phillips says it’s likely a factor, but he notes that infrastructure matters too.

“The same old weather would have a different effect now than it had twenty, thirty, forty years ago,” said Phillips. “It doesn’t matter how dry Toronto or Ottawa or New York City are. That rain drop becomes a flood drop when it falls, because that rain is falling on impervious surfaces. What has changed is the surfaces on which that rain falls, because it falls in built up areas. We don’t have green infrastructure anymore, we don’t have park lands that could absorb the water.”

But Phillip also notes that the weather is changing, and that climate change likely has a role. Though he’s quick to note the difference between a changing climate and changing weather.

“Climate change doesn’t cause the weather, it doesn’t cause rain,” said Phillips. “You’re going to get hurricanes, tornadoes, sandstorms, windstorms, floods without climate change. We always have. What makes climate change different is that it gives storms a different personality or character. It changes the intensity, the duration, the frequency of it. It doesn’t give you typhoons in Saskatoon or sandstorms in Detroit—but the statistics of weather change.”

To put that in context, it helps to lay out what factors aligned to cause this flooding. If the winter snowfall had been less, if the spring had not been unusually warm and wet, if the rains had kept on moving, Western Ontario and Eastern Quebec would be in a much drier situation right now. If—and it’s too soon to have data on this —climate change increased the likelihood of each of those occurrences, climate change would not have caused the floods. But it would have made the flood-perfect weather more likely to occur.

It’s too soon for a proper attribution study, but Phillips says that the fingerprints, or the patterns of the weather, are in line with changes that Canadians have been seeing in the weather in recent years. The storms that hit Canada, like this one, seem to have lost their hit and run characteristic and are sticking around longer, and dumping more water.

“What we’ve seen over recent years, more than the fact that we’re squeezing more precipitation over the air masses, we’re seeing that storms are hanging out longer, they’re squeezing misery out longer,” said Phillips.

PLEASE HELP!!!! Many boroughs/cities in and around Montreal need your help! Laval (Fabreville) too!!! I am calling on ALL of my #IG friends! If you would like to help in the flood relief effort but are unsure how to get involved – we need your help! I have arranged for 3 drop off locations for any non-perishable items, diapers (sizes 3 and up), baby food, female hygiene products, toiletries, blankets (clean), clothing (clean) – anything you are able to donate! RDP: 12356 Lorenzo-Prince Rivière-des-Prairies (H1E 4J7) LAVAL: 1733 Norman Bethune Laval (H7M 4E8) DOWNTOWN: 642 boul Dollard Outremont (H2V 3G3) Please share & help spread the word! If you need other drop-off locations then please DM me! Thank you!!! ❤️❤️❤️ #mtlflood2017

It’s a pattern in keeping with the predictions of what Canada will look like under climate change. “The intergovernmental panel on climate change predictions for later this century, if greenhouse gasses continue to accumulate and the eEarth continues to warm, is for Canada generally to get wetter,” said Henson.