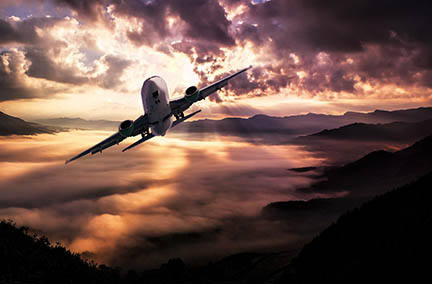 Airplane passengers are in for an increasingly bumpy ride according to a study released today in the journal Advances in Atmospheric Sciences. Climate change is altering the jet stream, making severe turbulence more likely. The study builds on earlier work which found that climate change would lead to bumpier airplane rides. What makes the new research unique is that it quantifies how much different kinds of turbulence will increase—59 percent in the case of light turbulence, a 94 percent increase in moderate turbulence, and 149 percent increase in severe turbulence.

For the one in four Americans who are afraid of flying, any jostling could be considered severe. But like an earthquake, turbulence is rated on a scale. One is light—gentle enough so passengers may not notice it—three is moderate, or enough to jostle a drink, five is severe, and seven is extreme.

“Anything above five is by definition stronger than gravity,” says study author Paul Williams, an atmospheric scientist at the University of Reading in the United Kingdom. “What that means is that anything that’s not strapped in will potentially be projected around inside the plane. That would include passengers.”

Shake, Rattle, But No Rolls

Turbulence happens when an air mass moving at one speed meets another air mass moving at a different speed. The meeting causes a sudden shift in airflow, leading air to move chaotically. It’s a bit like trying to walk down the street on a particularly windy day, and being buffeted about in multiple directions. So, a plane moving into turbulent air may have its left wing hit by an upward gust causing the plane to bank right. Similarly, if both wings are suddenly hit by a downward gust, the whole plane might drop a bit, which isn’t great for anyone inside.

Last October, an Air New Zealand flight from Ho Chi Minh to Auckland encountered turbulence so severe it was forced to turn around after two crew members suffered critical injuries. That same year, a JetBlue flight from Boston to Sacramento was forced to make an unplanned landing after it hit a patch of turbulence that sent 22 passengers and 2 crew members to the hospital. In 2015, an Air Canada flight from Toronto to Shanghai experienced turbulence that led to the injuries of 21 people. The plane made an emergency landing in Calgary, Alberta. And in 2014, a United Airlines flight from Denver to Billings, Montana hit turbulence so severe that five people went into the hospital.

Satellite observations dating back to the 1970s show that because of climate change, different parts of the atmosphere are warming up at different rates. At 30-40,000 feet, the low latitude tropical regions are warming much faster than the high latitude arctic regions (which is the opposite of what’s happening on the ground). This temperature difference has always driven the jet stream, but as tropical regions warm up faster than the arctic, that difference grows—and the jet stream becomes both stronger, and less stable. Turbulence is coming along for the ride.

“Turbulence can actually damage planes,” said Williams. “There was a plane flying over the Colorado Rocky’s on the 9th of December 1992 through some extreme clear air turbulence—it would have been a seven [on the scale]. Six meters of the left wing broke off and one of the engines got torn off as well.”

Plane engines, Williams told PopSci, are affixed with aptly named, ‘shear nuts and bolts.’ The engines are designed to shear off planes if they become unstable. “The fact that the engine broke off probably saved the life of the people on the plane, because the last thing you want is an unstable engine kind of hanging off a plane causing instabilities.”

This kind of damage is rare—in most cases turbulence is still more about comfort than safety, and there hasn’t been a single plane crash due to turbulence since the 1960s. But even light and moderate turbulence will cause wear and tear on a plane. That means the need for inspections—for planes to be taken out of service and maintained—will also go up. It’s a significant economic burden for an industry already operating on razor thin margins.

While the seasoned traveler may wonder why pilots don’t just fly around the turbulence, the answer is simple: the pilots can’t see it. Though we tend to think of turbulence as being associated with storms, the kind of turbulence Williams focuses on is related not to weather but to the jet stream, or the bands of strong wind in the upper levels of the atmosphere.

“We call it clear air turbulence to distinguish it from the other kinds of turbulence which is in clouds,” said Williams. “The pilot can see the clouds, so he or she knows that the turbulence will be there and will avoid trying to fly through. But clear air turbulence is particularly hazardous precisely because it’s invisible. It tends to strike when the seatbelt light is switched off and passengers are moving around inside the cabin.” On average, patches of clear air turbulence tend to be more than half a mile tall (3,280 feet) and 37 miles wide.

Williams was able to predict increases in turbulence by running a climate model. He ran it first under control conditions, using preindustrial levels of carbon dioxide for the equivalent of twenty years. He then ran a second simulation where the CO2 is double that of the pre-industrial levels—roughly where we’ll be by the middle of the century if we don’t change our behaviors.

But climate models don’t actually have this kind of turbulence built into them. “Williams took 21 vetted, commonly used indicators for turbulence and looked for those in the climate model,” said Kristopher Karnauskas, a researcher in the Department of Atmospheric and Oceanic Sciences at the University of Colorado Boulder who was not involved in the study. “It’s not just limited to one predictor of turbulence, because no one predictor of turbulence is perfect or always right, so he used a broad ensemble approach.”

Williams then compared the control run with the elevated CO2 condition and calculated the amount of turbulence in both of them. That’s how he found the increases.

Climate models have come under fire recently, in part because to lay people they can seem disconnected from reality. That’s why Karnauskas likes to use TV screens to explain how they work.

“With a climate model, you take the planet and you cut it up into grid cells like the pixels on a TV,” Karnauskas. “Each of those grid cells knows all the laws of physics. It looks at its neighbors around it and says ‘is it warm over there, is the wind coming from this direction, and then it marches forward in time.” By being fed those base conditions, the model can make extrapolations about the future.

In fact, the only limitation of the study that Karnauskas notes is that it only uses one climate model, which he says limits our ability to categorize the full certainty of the results. But this isn’t the first study to suggest that the jet stream is changing along with the warming climate.

In January 2015, a flight from New York’s JFK airport to Heathrow took only 5 hours and 16 minutes because the jet stream was so strong. Ordinarily, that flight takes longer than six hours. During that same period, westbound flights from London and Paris to New York battled such strong heads that they burned more fuel than expected, requiring stops in Maine for refueling

It’s important to note that Williams’ study only looked at the North Atlantic—its conclusions can’t be extrapolated for other routes. At the same time, however, it’s important to recognize the impacts that climate change will have on the aviation industry so that companies can better plan and prepare for everything from plane maintenance and repair to fueling.