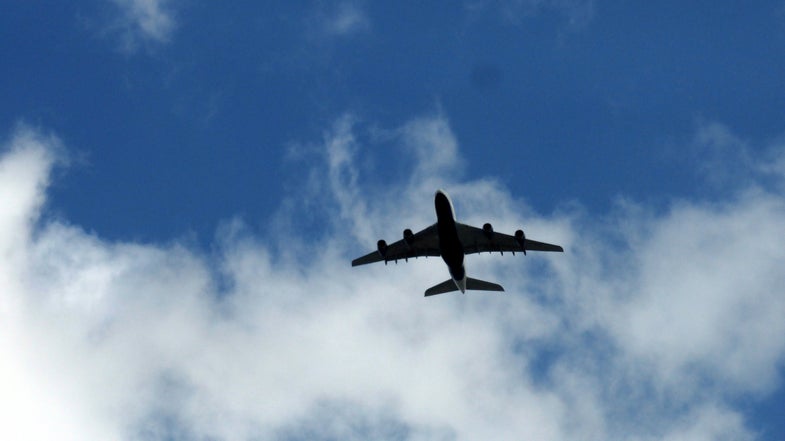 That hop across the pond is about to get longer. A new paper published in Environmental Research Letters finds that climate change could make flying even worse.

A jet stream is a current of fast-moving air in the atmosphere. Just as you can swim faster and further when going along with a current of water, pilots can take advantage of jet streams when they happen to be flying in the same direction as the stream of air; they use less fuel and can get to their destination faster. But there is also a downside. When flying against a jet stream, flights can take much longer.

The researchers predicted the future patterns of the jet stream using a computer model, and assuming that the current levels of carbon dioxide ( a potent greenhouse gas) doubled. They found that under those circumstances, the jet stream would almost certainly strengthen, making flights from the U.K. to the U.S. twice as likely to take over 7 hours. Flights from the U.S. to the U.K. on the other hand would be twice as likely to be less than 5 hours and 20 minutes. That’s just a few minutes slower than the record of 5 hours 16 minutes set by a jet last year when the jet stream was particularly strong. For comparison, a transatlantic flight today normally takes between 6 and 8 hours.

Unfortunately, the quick pace heading from the U.S. back towards Europe won’t be enough to make up for the slower flight times on the way back, which has dire consequences for the 600 or so flights back and forth across the Atlantic that happen each day.

In the paper, the authors write: “Even assuming no future growth in aviation, the extrapolation of our results to all transatlantic traffic suggests that aircraft will collectively be airborne for an extra 2000 [hours] each year, burning an extra 7.2 million gallons of jet fuel at a cost of US$22 million, and emitting an extra 70 million kg of carbon dioxide, which is equivalent to the annual emissions of 7100 average British homes.”

This study only looked at flights from North America to Europe (particularly between New York and London) but there are other jet streams in the southern hemisphere, and the news could be just as bad in other parts of the world. Future studies (and flights) will let us know how other routes might be affected.