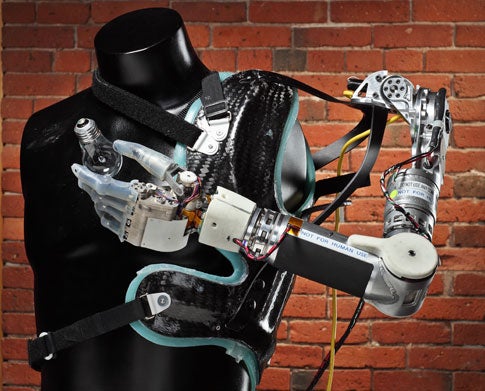 This prosthetic is so advanced it takes its name from Luke Skywalker's replacement hand in Star Wars. Courtesy DEKA
SHARE

The foot-controlled “Luke” prosthetic arm may not win any lightsaber fights, but it could soon lend a helping hand to wounded warriors returning from Iraq and Afghanistan. A three-year study by the U.S. Department of Veterans Affairs (VA) is slated to provide engineering feedback before widespread distribution to veterans, according to an announcement last week.

The prosthetic arm is the brainchild of Dean Kamen, inventor of the Segway and founder of DEKA Research and Development. DEKA has fine-tuned a control system that acts like a foot-operated joystick — users maneuver the arm by shifting pressure to different parts of a shoe embedded with an array of sensors. Future wireless versions may circumvent the wires that currently relay signals from shoe to arm.

It sounds potentially clumsy, and yet the arm has demonstrated enough sensitivity to pick up pencils and keys. A vibration signal provides user feedback to indicate how tightly the artificial hand is gripping an object.

Frederick Downs, Jr., director of VA’s Prosthetic and Sensory Aids Service and a Vietnam veteran who lost his left arm, described being “brought to tears” when the prosthetic arm permitted him to take a drink of bottled water in one smooth motion. The arm also allows users to perform movements while reaching over their heads.

The DARPA-backed arm also need not rely on a foot-controlled system in the future. Engineers can adapt it to work with more conventional shoulder joysticks, or even myoelectric switches wired directly to nerves and muscles in the upper body that respond to brain impulses.

If the “Luke” arm does eventually merit mass distribution to veterans, it could represent one of the sweetest triumphs yet for an inventor who already has a long list of medical devices to his name. It’s pretty cool to an avid Star Wars fan, too.