AI could make MRI scans as much as 10 times faster

In medical imaging, less data could be better. 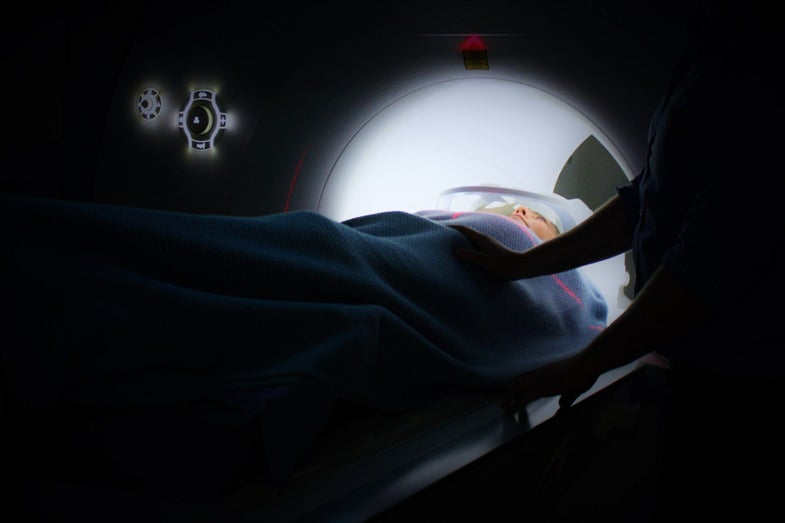 Getting an MRI means being in a noisy, claustrophobia-inducing tube. For many, that’s no fun. For others—like children or the very unwell—it’s worse. So to make these diagnostic tools run even faster, researchers are exploring incorporating a new tactic: using artificial intelligence to take the raw data generated by the MRI machine and create readable images.

The reason MRI scans are slow, explains Daniel Sodickson, a professor in the department of radiology at NYU School of Medicine, is that they need to capture all the data necessary to generate a nice image for a radiologist to interpret. A knee scan can take around 15 to 20 minutes; a brain, 30 minutes; imaging a heart can last an hour. But what if you could run that machine faster and still get a usable image?

Using AI, “it may be possible to capture less data, and therefore image faster, while still preserving—or even enhancing—all the rich information content of the magnetic resonance images,” Sodickson says.

Here’s how they’d do it: They’d run the MRI scan faster, gathering less raw data in the process. But instead of interpreting that raw data the traditional way—which involves a tried-and-true non-AI mathematical process—they train artificial intelligence to do the data-to-image conversion. If researchers try to interpret the fast-MRI data the traditional way, the results are bad, because there’s not enough data in the first place. With AI, they are better.

The goal right now is to be able to run an MRI scan as much as 10 times faster and get an image with the required accuracy. Researchers at NYU have been working on this idea since 2016, and now they’ve announced they’re partnering with the AI research wing of Facebook, called FAIR, to push it forward.

Faster MRIs would be a good thing—patients would spend less time in machines, and imaging centers and hospitals could do more tests per day. Another benefit suggested by this research is that if an MRI could run fast enough, a physician could order one of those scans instead of a traditional X-ray or CT exam—and save the patient from the dose of radiation they’d get otherwise, since magnetic resonance imaging doesn’t use radiation to do its job like those other scans do.

The project represents an interesting approach to incorporating artificial intelligence into medicine. AI is frequently used to analyze what is in an image; in everyday life, those images could be pictures of pasta or hot dogs uploaded to Yelp, for example. Or, in the case of medical images like X-rays, research studies have explored using AI to analyze tuberculosis in X-rays or knees from MRIs. And in a collaboration between Alphabet’s DeepMind and Moorfields Eye Hospital in England, AI will analyze three-dimensional scans of the backs of patients’ eyes and even suggest treatment.

But in this case, the strategy is different: the AI is helping create the image in the first place.

“AI is capable of learning transforms that are not immediately obvious to the human mind,” Sodickson says, referring to the process of transforming the raw data into the image that radiologists later read. “Early indications are very positive that this is something that AI can do well.”

Of course, creating an image from less data than usual sounds risky—what if the AI interpreted that data in a way that produced a nice-looking picture, but missed something critical? A small tear in a ligament, or a little tumor? Sodickson says that’s the biggest issue on their radar. “We need to be sure that what we are presenting is truth,” he says. “We have lots of ways to try to test this.”