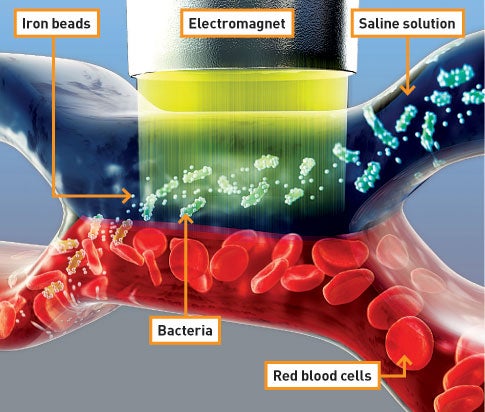 If your uncle says he’s getting magnetic therapy, you might feel the urge to tell him to save his money instead for that tinfoil hat to keep the CIA from reading his mind. But if he’s being hooked up to Don Ingber’s magnet machine, it just might save his life.

Ingber’s device magnetizes microbes and draws them out of the blood. It could save some of the 210,000 Americans—mostly newborns and the elderly—who die sepsis-related deaths every year. Sepsis sets in when bacteria or fungi invade the blood, which can cause organ failure before drugs have time to take effect. “Traditionally, you prescribe antibiotics and pray,” says Ingber, a vascular biologist at Harvard Medical School and Children’s Hospital. His machine operates more quickly.

In lab tests, Ingber’s team mixed donor blood with the fungus Candida albicans, a common cause of sepsis, and added plastic-coated iron-oxide beads, each a hundredth of a hair-width in diameter and covered with antibodies that seek out and attach to the fungus. Next they ran the mixture through the dialysis-like machine, which uses an electromagnet to pull the beads, and any pathogens stuck to them, from blood into a saline solution. The device removes 80 percent of the invaders—enough so that drugs could knock out the rest—in a couple of hours.

Ingber will begin animal testing this fall to ensure that the method works in living subjects and doesn’t hurt healthy cells. He might later modify the technique to pull cancer cells from blood or harvest stem cells. “This can sift through a patient’s entire blood volume and pull out the needle in a haystack,” he says.