The long road to the modern car's smooth ride 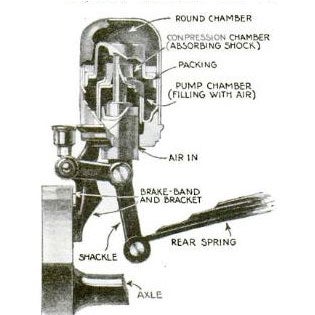 The term “shock absorber” is a misnomer. Contrary to the seemingly self-evident meaning of the words, shock absorbers don’t absorb shock. They dampen the oscillations of the springs. Which is why the British name for them – dampers – makes much more sense.

After a spring is deflected, it bounces back past its original position and continues to oscillate until its energy is dissipated by a natural phenomenon known as hysteresis. A heavy-duty spring used in an automobile’s suspension would continue to oscillate for a long, long time if that motion weren’t controlled. Therefore, shock absorbers are fitted to dampen the oscillation. (Technically, shock absorbers transform the kinetic energy produced by suspension travel into thermal energy that’s dissipated by hydraulic fluid.) That’s why the classic shade-tree test of shock absorber efficiency is to push down hard on one of the four corners of your car and see how long it continues to bounce up and down. (Actually, a rep from a prominent shock absorber manufacturer says this is a dumb idea. See:)

The first cars – horseless carriages, really – weren’t fitted with shock absorbers. But as speeds rose, so did the need for suspension damping. Early shock absorbers, which persisted into the 1930s, tended to be so-called friction dampers. Frenchman Maurice Houdaille is credited with inventing the first shock absorbers to take advantage of the excellent cushioning qualities of hydraulic fluid. He received his first patent in 1907, and his products eventually became standard equipment on the immensely popular Model A Ford in 1927.

Among American manufacturers, Monroe was the 800-pound gorilla. The company introduced its first hydraulic shock in 1926. In 1951, the Monro-Matic debuted and established the industry standard for the telescopic shock that’s used to this day. This consists of a tube with a piston that moves up and down through a chamber filled with hydraulic fluid that’s often augmented with nitrogen. The movement of the piston draws in or displaces fluid though holes known as orifices. The size and placement of the orifices determine the damping characteristics of the shock absorber. (Here’s a good illustration of how the process works:)

Depending on how sophisticated the unit is, a damper can be adjusted for high- and low-speed performance in both bump (the piston going up) and rebound (the piston coming back down). For a variety of reasons, tuning shock absorbers is something of a black art, but it’s a critical skill for success in the racing world, where springs tend to be incredible stiff, so adjusting damper settings is one of the few ways engineers can dramatically change the handling characteristics of a car. In fact, it’s not uncommon to have a guy who does nothing but shock tuning, and many teams have their own shock dynamometers to test dampers.