Once upon a time, drivers had only a ball of wax and a wick to light their way 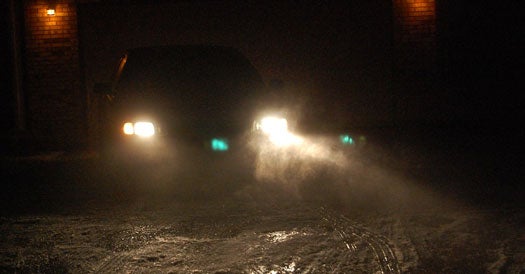 This past summer, I flew to France to cover the 24 Hours of Le Mans for PopSci. As it happened, I went directly to the track for the first evening of practice after arriving from the airport. When the session ended at midnight, I then had to try to find my hotel, which was about 60 kilometers from the circuit.

Under normal circumstances, it would have been a pleasant hour-long drive on secondary roads that meandered left and right – and up and down – through rolling French countryside. But at that particular moment, it was pitch-dark and raining lightly, and I had to deal with an unfamiliar rental car and torturously complicated directions that took me through several villages and at least nine roundabouts. I was hustling up a mild incline when, all of a sudden, the road seemed to end, and I couldn’t see anything other than an inky void waiting to swallow me up. I experienced an instant of sheer, unadulterated terror before my headlights fixed upon a reflective sign, and I realized that the road was about to crest a hill and bend to the right. This happened several more times that night, nearly giving me a heart attack on each occasion.

The next morning, when I made the drive back to Le Mans in daylight, I realized that there wasn’t anything intrinsically terrifying about the road. This got me to wondering about headlights, which are one of those things that you never really think about – until you realize that your life depends on them.

Many of the fixtures of early automobiles were taken directly from the horse-drawn carriages that preceded them. The first cars were equipped with lamps containing candles. These illuminated the bodywork at night but didn’t throw much useful light and were obviously inadequate once cars started going faster. Oil-fueled lamps came next, but they were soon superseded by acetylene torches. In 1904, Carl Fisher and James Allison formed Prest-O-Lite, whose hissing acetylene contraptions – mounted in front of parabolic mirrors that reflected beams of light – soon dominated the nascent industry. (Part of the immense fortune they earned was used to build the Indianapolis Motor Speedway.) But acetylene lights were dirty and smelly, not to mention prone to exploding. (This Swedish video shows a bicycle lamp in action:)

So in 1912, Cadillac introduced headlights powered by a pioneering electrical system developed by Delco. Electric headlights have been the standard ever since.

A lot of the innovations that we think of as modern actually date back nearly a century. High-low bulbs have been the norm since the 1920s. Retractable headlights were introduced on Gordon Buehrig’s stunning coffin-nose Cord 810 in 1936. Adaptive headlights, which turn to follow the road, debuted on the Czech-built Tatra in 1935. Sealed-beam headlights – still the norm to this day – date from 1939. Halogen lights first appeared back in 1962, moving from the world of rally racing to street cars. These days, it’s hard to do better than the bright, white light thrown by high-intensity discharge (HID) xenon lamps, which were popularized in the 1990s. (Here’s a visual comparison of the effectiveness of halogen and HID lights:)

Federal statistics show that half of all fatal car accidents occur at night, when only one-quarter of all driving is done. This suggests that driving at night is twice as dangerous as driving during the day. But in fact, these numbers are skewed by two major factors. First, people are much more lax about wearing seat belts at night than they are during the day. Second, and far more important, driving under the influence of alcohol and drugs is much more common after dark. Take away these two variables, and there’s not a tremendous disparity between daylight and nighttime fatalities. This is a testament to how well modern headlights work. And it’s why, as I found in France, we freak out when we can’t see the road ahead as well as we’re accustomed to seeing it.