London’s iconic black cabs are getting a green upgrade in time for the 2012 Olympic Games, and the first street... 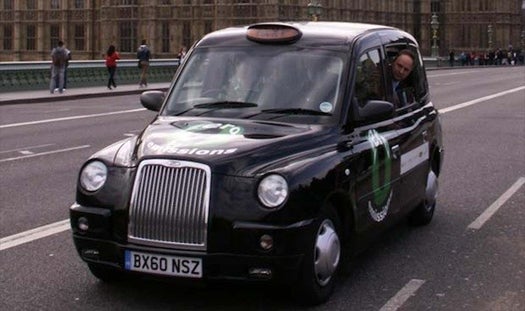 London’s iconic black cabs are getting a green upgrade in time for the 2012 Olympic Games, and the first street legal iteration just took to the streets. Developed by Intelligent Energy, this is London’s first cab powered jointly by a hydrogen fuel cell and lithium polymer battery packs.

The combination fuel-cell/battery pack offers the cab enough power to get around London’s congested byways for a full day (range: 250 miles). It’s not particularly peppy (zero to 60 in just fourteen seconds!) but for a city-trawling cab its 81-mile-per-hour top speed is more than sufficient to get Brits from here to there in a timely fashion.

The idea here is to deliver a fleet of clean cabs to the street before the 2012 Games get underway next summer, and Intelligent Energy claims they are on track to do exactly that. Which is a good thing. Once the Brits have upgraded their cabs, they can focus on other things that could use a redesign. Like that 2012 Olympic logo.